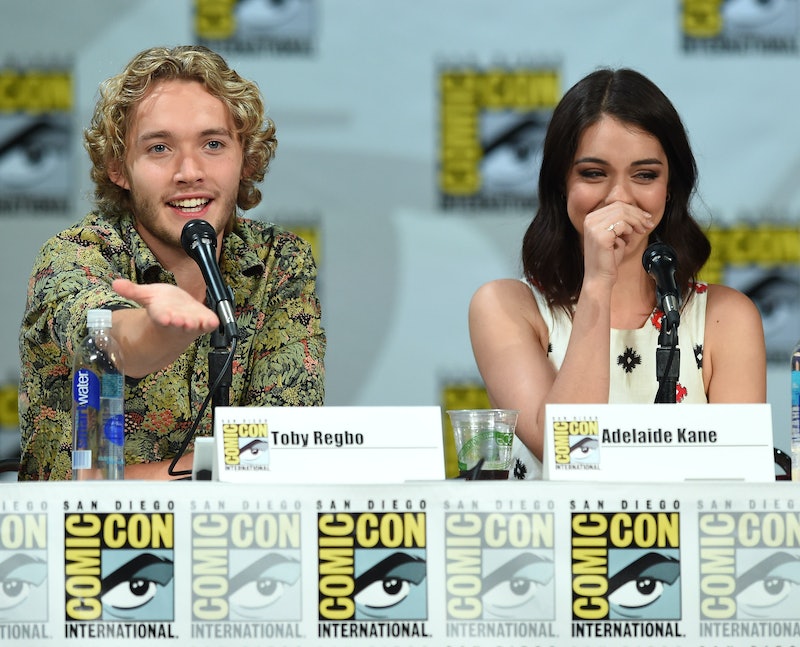 As we return to fall and remind ourselves of our favorite sweaters, boots, and scarves sitting in our closet all summer, the Mary Queen of Scots revs up for a season full of new death threats, political upheaval, some love issues, and of course, tons of historically inaccurate, yet gorgeous gowns. But the CW’s Reign Season 2 won’t be back until Oct. 2, which is like, a year away. Well, technically it’s less than a month away, but still, who has the patience for that?

In the meantime, I’ll just stock His and Her Highness’ Twitters and Social Media to you know, pick up as many spoilers as possible. Adelaide Kane, Mary Queen of Scots herself, was recently hawking so I know some sort of fowl will be part of the storylines. The show is in need of an animal sidekick, I suppose. Meanwhile, France’s Francis and his half-brother Sebastian are holding their heads in a cooler of ice water.

No, not for some sort of knight training. It was actually just Toby Regbo and Torrance Coombs doing their version of the ALS ice bucket challenge, but they did it with brotherly love. I think I even heard Adelaide Kane’s voice in the background, egging them on, being loving and encouraging, possibly being loving and encouraging to Toby Regbo because she loves him. I'm making giant leaps now aren't I? But seriously, just hear Kane's laughter.

I get that they're not actually Mary Queen of Scots and Francis. I know that it's just a show, but a part of me is a big Frary and Tobelaide fan — yes those are their couple names — and I will look for hints of Adelaid Kane and Toby Regbo dating in real life, even if they did say say quite adamantly that weren't at this summer's Comic Con.

I'm pretty much in firm denial of that, maybe because they make a very handsome married couple on the show. Here are a few reasons why they would be royally the best.

They Love Their Modern Gadgets

Or just televisions. Or maybe this photo suggests time travel. Either way, they're together experiencing it.

Here's a kitten lucky enough to be owned by his highness, Toby Regbo.

Because come on! Not everyone can carry off gold embellishments like that!

They Balance Each Other Out

He's concerned about love. Love of country! Love of Mary!

She's all about the harsh realities of living during the 16th century.

Because They Have a Way with Animals

This is a baby squirrel Toby Regbo has been documenting on his Instagram.

This is a hawk that has a super impressive stare that Adelaide Kane used during her no-big-deal-just-chilling-with-a-bird hawking excursion for the show. Obviously, they should be careful about the hawk and the squirrel meeting though.

Simply put, food's important to them. Well, because they're human but hey they can unite over Regbo's mastery of one dish.

And Kane likes eating food. So there! Match made in heaven or at least King Henry's court.

Of course, I could probably just wait till Oct. 2 for when Reign's season 2 starts to get my fill of these gorgeous people in semi-period garb, hugging, kissing, playing man and wife as they battle pestilence, Lola's secret, and tons of other castle antics. In the meantime, I'll just rewatch this and go about my business.