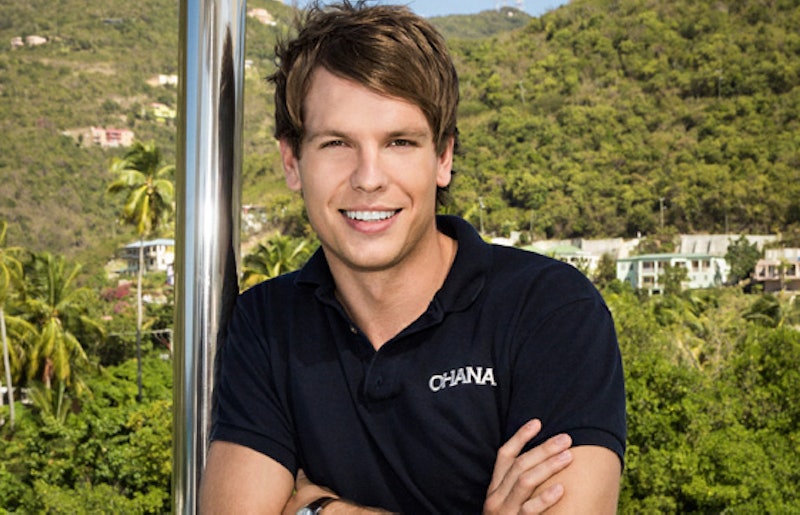 It's doubtful too many people were left slack-jawwed when Andrew Sturby was let go on Tuesday's episode of Below Deck. Not only did he flat-out lie on his resume, he, to put it bluntly, sucked at his job. The crew members, understandably, were eager to see him go, and, judging by a lot of their tweets and interviews regarding Sturby since the show wrapped, it doesn't seem like they've had a change of heart. But, even though Sturby was far from a fan favorite, admit it: you're kind of curious to hear about what he's up to now. Did he find another job on a yacht? Did he leave the biz altogether?

Turns out, yes and yes. In Sturby's blog on Bravo, he revealed that, after his departure from the Ohana, he did in fact get another job on a boat. He said:

[I] eventually found my way to another deckhand position, on a 116' 0" yacht. The captain on that boat, unfortunately, had different goals from the owner who hired me to be trained. This captain refused to "teach" me what I had left to learn about docking the boat, leaving the dock, operating the anchor, and other general job requirements. He nagged the owner that he deserved a seasoned deckhand and caused my dismissal.

So yeah, he was fired again. Not all that surprising. It's actually more surprising that Sturby even wanted to work on a boat again, given how little he seemed into things on the Ohana — and I'm guessing the person who hired him missed the first few episodes of Below Deck. I mean, that's basically all the resume anyone needs to see.

Sturby now has left the world of yachting and since has taken up a job as a waiter/bartender. "In need of immediate work, I found an opening as a server/bartender," Sturby wrote in his blog. "The job went well and I have since become a certified bartender through a school." So, at least he's got that going for him. Let's hope he doesn't mess that up.

More like this
Here’s How Much It Costs To Rent The St. David Yacht On 'Below Deck' Season 10
By Gretchen Smail
Miriam Haart & Girlfriend Nathalie May Have Broken Up After 'My Unorthodox Life'
By Brad Witter
Robert Brotherton's Boyfriend Ra'ed Saade Competed On Several Reality Shows
By Brad Witter
We’ve Got A Text! Another 'Love Island' Series Is On The Way
By Darshita Goyal
Get Even More From Bustle — Sign Up For The Newsletter