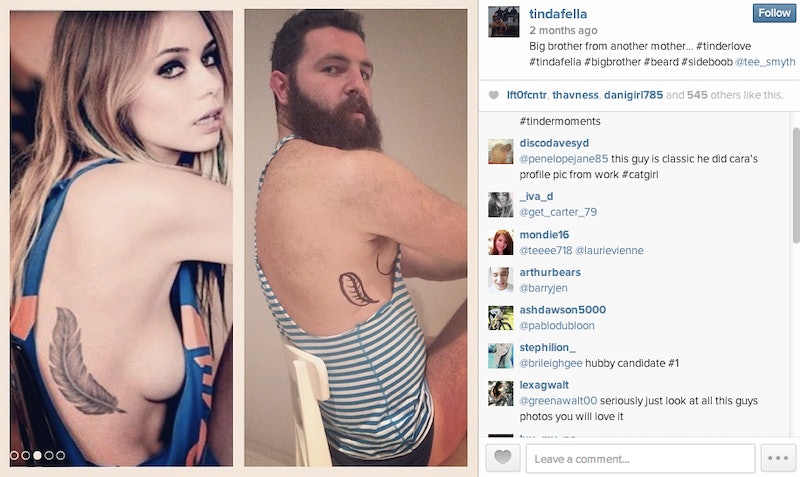 It's no secret to anyone that Tinder is weird, and Tinder photos can be even weirder. Which is why it's not incredibly surprising that the Internet has now brought us an Instagram account called Tindafella, which parodies Tinder photos. The account has over 11,000 followers, and it's gaining in popularity.

The premise of the account, which is run by 25-year-old Jarrod Allen, is simple. Allen takes Tinder photos of girls that come across his phone and recreates his own version. Sometimes the photos involve an odd outfit or a bizarre pose, but no matter what their content, Jarrod's version are definitely weirder than the original. He promises, though that he's not doing it to be mean. He explained to Cosmo, "It's a bit of fun. I'm more recreating their beauty than mocking them!"

And for the most part, people seem to be really enjoying the photos. The Gloss calls them "hilarious" and "all in good fun," while others have used the phrase "pretty perfect." Cosmo refers to it as "Tinder from a guy's POV [point of view]." Is this how ridiculous Tinder women look to the guys on the app?

Maybe I'm just missing something here, but to me it feels like there's something a little less light hearted going on. I mean, I get that dating apps and online dating in general are pretty ridiculous — hence the rise of Tumblrs like Straight White Boys Texting or the inexplicable trend of tigers in guys' profile pictures — but the fact that this guy is only parodying women makes me kind of doubt that this really is just "all in good fun." I mean, there aren't guys doing stupid things, too? Because I'm pretty sure there are.

Even more tellingly, a lot of the photos Allen chooses to parody are just...normal photographs.

There's not really anything bizarre or unexpected about them. But Allen's take on them often makes it seem like they really are somehow funny, both by the simple fact he's chosen to parody them and the exaggerated manner in which he does. To me at least, it feels pretty mean to single someone out for a perfectly ordinary picture and essentially make fun of them and the photo.

Now, to be sure, there are a lot of photos in the Tindafella account that were pretty bizarre to begin with, and that naturally lend themselves to parody.

But still, a lot of the photos Allen picks are not inherently outrageous. And even among the photos he picks that are a little odd, the way in which he chooses to parody them is sufficiently over the top — much more so than the source material — that the intention seems more like ridicule than self-deprecating "Look at how silly I am" humor. He's not trying and humorously failing to pull off an effect, but mocking the effect itself.

It's a shame, because an Instagram (or Tumblr or whatever) dedicated to poking fun at dating app profile pics could be amazing. There's so much satire material there, on both the men's and women's side. But the Tindafella account isn't really engaging in satire — Allen isn't poking fun at digital dating itself, or using the over-the-top profile pics (from users of all genders) as a way of commenting on the ridiculous experience that using Tinder can be. Instead, he seems to just be taking random women's photos — sometimes strange, sometimes not — and making fun of them.

Because yes, his pictures of himself are funny, but the joke isn't ultimately on Allen in these pictures. We're meant to laugh not at him failing to try to pull off a look that the woman in the photo manages much better, but to laugh at the woman for posting such a photo in the first place, even if there wasn't anything wrong with the picture to begin with.

I'm not telling anyone they aren't allowed to find this account funny — clearly lots of people do, and it is certainly not my place to judge. But I really don't think this project really manages to be the light hearted satire people want to think it is.

And really, women already have so much to deal with when trying to use dating apps — be sexy, but not too sexy; fun loving but also classy but also adventurous; don't attract stalkers, but make sure you stand out; the list goes on. Given all that, women really don't need some guy mocking them just for kicks on top of it.