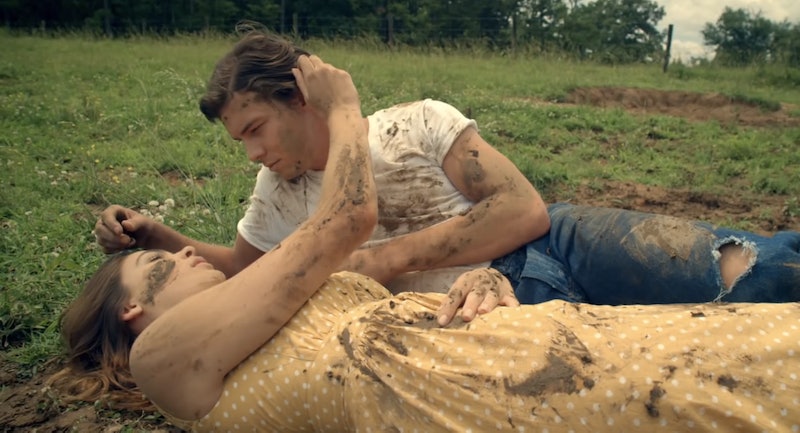 Recently I took a road trip from my home in Los Angeles to San Francisco for the weekend. Stuck in Labor Day traffic, I relied on the radio to ease my boredom and distract from my cramping right leg. Unfortunately, the long sprawl between the City of Angels and the Golden Gate offers lengthy patches of little cell phone service and inaudible radio stations. So I found myself listening to the only music that pierced my speakers in a crisp iteration: country hits. I've never had a real admiration for country music, but I've also never taken the time to listen to it. So here I was, practically forced to indulge in the twang-y tunes permeating my Prius.

While I didn't cotton to many of the songs, I did enjoy a few and, listening to nearly six hours of country jams, found it to be quite an education. For one, I appreciate country music for the sole reason that each and every song has a clear narrative. As a storyteller, I am constantly searching for the narrative — in conversation, in day-to-day life, in music, and of course in media. But while much of mainstream music lacks a discernable storyline, country music takes you on a journey from beginning to end. There is an evolution, an arc, and the song's characters take a clear journey where they transform from beginning to end. That's a lot to cram into under three minutes.

Another aspect of popular country music I took note of were the themes that recurred in each song. Surely this happens with most genres of music: Rap songs often include illusions to money and excess, for example. But the phrases repeated in country music struck me as being massively homogenized. To prove this point, I analyzed the top 10 country songs on Billboard's top country hits. From the lyrics, we can see just what composes a 2014 country hit. Behold, the 13 most commonly reoccurring elements in today's country hits, from dirt roads to blue jeans.

Here are the top 10 songs in question:

And here are the must sung about elements in all 10 songs.

The most obvious theme in country songs: girls. Even the one female artist on our list, Lady Antebellum, sings about girls in her track "Bartender." (But no, the song does not pass the Bechdel test, as the girls mentioned are going out to get wasted to forget about a dude. Le sigh.) Also, there is no mention of "women" in the top 10 tracks, but plenty of "girls."

Another big hitter, alcohol is referenced in eight out of the 10 songs in question, the two exceptions being Sam Hunt's "Leave the Night On" and Lee Brice's "I Don't Dance," (a song that is sure to be played at country-lovin' summer weddings everywhere). The most obvious permutation of this theme is Dierks Bentley's "Drunk on a Plane," which is exactly what it sounds like:

Country ballads love their love makin'. But what do they love more than a sexy, sexy country tune? Allusions to sex. For example, in Jason Aldean's "Burnin' it Down" he sings: "Let's hit the switch and let our shadows dance." SEX. In Luke Bryan's "Rollercoaster" he sings: "And we spent that week wide open/Upside down beside the ocean." SEX. Some songs are less creative with their sensual diction. Kenny Chesney's "American Kids" sings: "Makin' it to second base, but sayin' you went all the way was Monday afternoon at practice."

Half of the songs on the list referenced cars, and you guessed it — most of those cars are trucks. Specifically, Chevys or Fords. While we didn't include this in the tally, there are also many allusions to front seats, rolled down windows and girls sitting shotgun, ya know, the perfect truck accessory! Dustin Lynch's "Where It's At (Yep Yep)" sings: "It ain’t in a suped-up shiny red new truck if she aint too my right."

With just as many mentions as physical cars, depictions of dirt and/or country roads also encompassed half the songs on this list. "Dirt" by Florida Georgia Line sings in excess about well, dirt. And the roads it makes up: "Red roads clay you grew up on... Drift a cloud back Behind county roads."

Cowboys wear 10-gallon hats and boots. And considering cowboys are the heroes of many of these songs, their trusty footwear is featured as well. Tim McGraw Featuring Faith Hill's "Meanwhile Back at Mama's" croons simply, "Walkin around in muddy boots."

Father figures are another stable of country ballads, because what's a cowboy without his male parental influence? Florida Georgia Line's "Dirt" sings: "That plowed up ground that your dad damned his luck on." Kenny Chesney's "American Kids" offers: "Sister's got a boyfriend daddy doesn't like." And "Meanwhile Back at Mama's" reveals: "Games on the tube and Daddy smokes cigarettes." From these descriptions of fathers, dads are flawed: unlucky, judgmental, and smokers.

Another staple of the country boy (and girl)'s wardrobe: good ol' fashioned blue jeans. Sam Hunt's "Leave the Light On" is the perfect iteration of swoon-enducing blue jeans: "Girl, you got the beat right, killin' in your Levis," he sings.

The weekend, that is, Friday night — Sunday morning is the best time of the week for blue jeans, boots, alcohol and trucks to align. TGIF!

Coming in with equal counts of weekend fun and blue jean wearing babydolls, crosses make the list with three out of 10 mentions. Luke Bryan's "Rollercoaster" opens the song with: "She had a cross around her neck..."

Apparently shredded tees are the mark of a country superstar. While there are only two mentions of ripped-up clothing on this list, the country genre has embraced the worn look in countless other country jams. Jason Aldean's "Burnin it Down" begins: "You slip your finger through the tear in my T-shirt..."