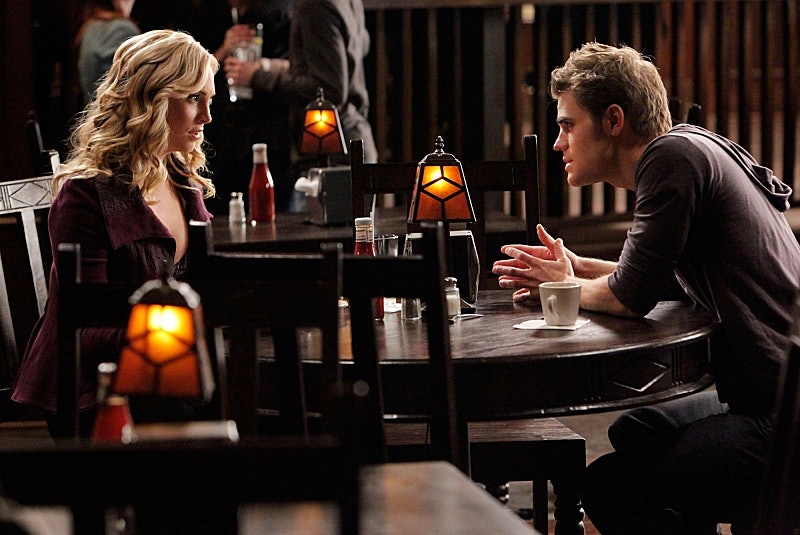 I'm really starting to wonder what exactly fans should believe about the future of The Vampire Diaries' most controversial 'ship — Stefan and Caroline. Because Julie Plec and the rest of The CW vampire drama's showrunners are leading us in all kinds of wild, different directions. One day they're on, one day Stefan and Elena are getting back together — frankly, it's getting ridiculous. And just when we thought and made peace with the very real possibility that Steroline will happen in TVD Season 6 because we need a new Delena, the game has changed again. According to TVD Season 6 spoilers that executive producer Caroline Dries dropped to TVLine, Steroline won't happen in TVD Season 6 because Stefan isn't ready. In fact, Elena's going to try to set her up with someone else.

Honestly, I'm so sorry to burst your bubble when we're less than a month away from The Vampire Diaries Season 6 premiere on Oct. 2, but I'm just following Dries' lead here. The showrunner told TVLine that while "love is in the air" for other characters on the series in the upcoming season — including the recently back-from-the-dead Alaric — Stefan "doesn't have the emotional energy for a relationship." So, basically, Steroline has been shelved, at least until Damon and Bonnie are safely returned to Mystic Falls and Elena finds her way back from her dark hole of depression. And, sadly, Caroline Forbes is going to get friend-zoned after she bravely professed her love for Stefan in Season 5 and Lexi backed her up by calling out Stefan for being a typical, oblivious guy and not noticing the signs. Someone cut this girl a break and let that Klaroline crossover reunion happen, already. PLEASE.

I know, your heart is totally broken. Heck, my heart is broken and I wasn't even rooting for Steroline in the slightest, being the diehard Klaroline 'shipper that I am. But this actually makes a lot of sense because —newsflash, people — DAMON JUST DIED. OK, when we pick up in Season 6 he'll have been dead for four months but still, that's not really a long time to fully grieve the loss of your brother who sacrificed himself to save you. And all TVD fans know that Stefan has so many emotions (sometimes too many) — just look at all that journaling he's done over the years — and they're all probably washing over him in debilitating waves right now. That doesn't sound like a guy that would be any good in a relationship but more than that, Caroline deserves so much better than to be Stefan's distraction romance from Damon's death. She's better than that, even if she thinks it's the right thing.

So where does that leave us with the state of Steroline? I don't think it'll never happen, the groundwork is obviously there for them to get together when Stefan pulls his emotions back together. But, at least until Damon and Bonnie have returned safe and sound, that 'ship will be on the backburner. Which is fine for Caroline because apparently, according to a "bonus spoiler" from Dries, Elena's going to play matchmaker for her friend who'll obviously be frustrated about losing yet another guy she's got feelings for. Dries told TVLine that Elena will set Caroline up with her new college buddy Liam (played by Maro James) because she thinks they'd be great together.

Well, it's not Klaroline or Steroline, but I guess any romance is better than no romance. Right?