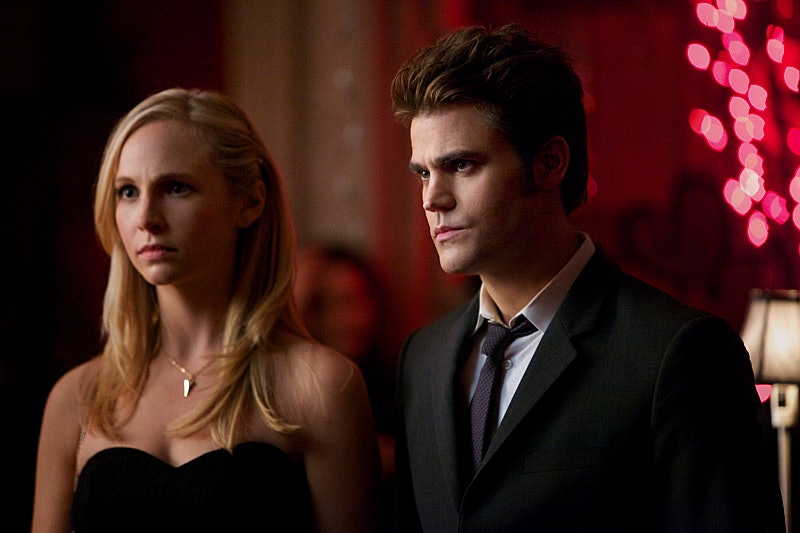 Controversial opinion: Stefan and Caroline need to happen. Sorry, Stefena and Klaroline shippers, but when it comes to vampire couples who just make sense, Stefan and Caroline are at the top of the list. Unfortunately for the small-but-vocal group of Steroline loyalists out there, this ship may not sail off to Couplesville anytime soon. According to executive producer Caroline Dries, Caroline's feelings for Stefan are a little hazy right now — not surprising considering the hell that broke loose in the Season 5 finale of The Vampire Diaries . So does this couple have a shot? I'm thinking that yes, they totally do — but Steroline shippers may have to wait for the pay off. Hmm... that sort of sounds like another Vampire Diaries couple, doesn't it?

One of the things that I love about the idea of Stefan and Caroline together is that it makes sense on a human level, and not a supernatural one. Early in the first season, it was clear that Stefan had a supernatural pull on Elena — they had this thing that defied logic. It was as if the universe wanted them to be together, and, in fact, it did: Stefan and Elena were destined to be together due to the doppelgänger spell. That may sound romantic, but in many ways, it's the exact opposite of a great love story: It's almost like the universe set them up into an arranged relationship. Elena probably would still be with Stefan, had she not recognized that her heart was really with his brother Damon — something the universe didn't necessarily predict.

Stefan and Elena didn't work out because they knew, deep down, this wasn't the match they wanted. Elena fell hard for Damon, but Stefan has stayed single, preferring to deal with the drama involving witches and travelers and other supernatural baddies instead of a relationship. Enter Caroline, Stefan's confidant and unfailing support system. Caroline knows Stefan's heart and appreciates him for it, and vice versa. The universe has no reason to want the two of them together — they aren't a part of any larger plan — but still, somehow, these two fit perfectly together. If only they could realize it.

Just like Damon and Elena, Caroline and Stefan started out purely platonic. It was only until the Season 5 finale that anyone even acknowledged that Stefan should consider taking everyone's favorite blond vamp out on a date. (Thanks, Lexi!) And, according to executive producer Caroline Dries, Caroline and Stefan may still need more time to acknowledge their feelings for one another — according to Dries, the bubbly vampire will swallow her more-than-friend feelings for Stefan for quite some time.

But that doesn't mean Steroline shippers are at a total loss. Consider the punch in the stomach that Delena shippers felt when Elena told Damon it was "always Stefan" — clearly things change. Stefan and Caroline may not get together right away, but that's because they deserve the epic slow-build that Delena shippers squealed over for years.

It's gotta happen, guys. Just wait for it.

More like this
Every Season Of 'Love Island' Ranked Best To Worst
By Alice Broster, Frances Stewart and Sophie McEvoy
Here’s What Happens To Bill & Frank In 'The Last Of Us' Video Game
By Brad Witter
Netflix Shut Down 'Bridgerton' S3 Rumours About A “Very Dark” Storyline
By Bustle
'Wednesday' Star Emma Myers Thinks A Wenclair Storyline Is “Possible” In Season 2
By Alyssa Lapid
Get Even More From Bustle — Sign Up For The Newsletter
From hair trends to relationship advice, our daily newsletter has everything you need to sound like a person who’s on TikTok, even if you aren’t.