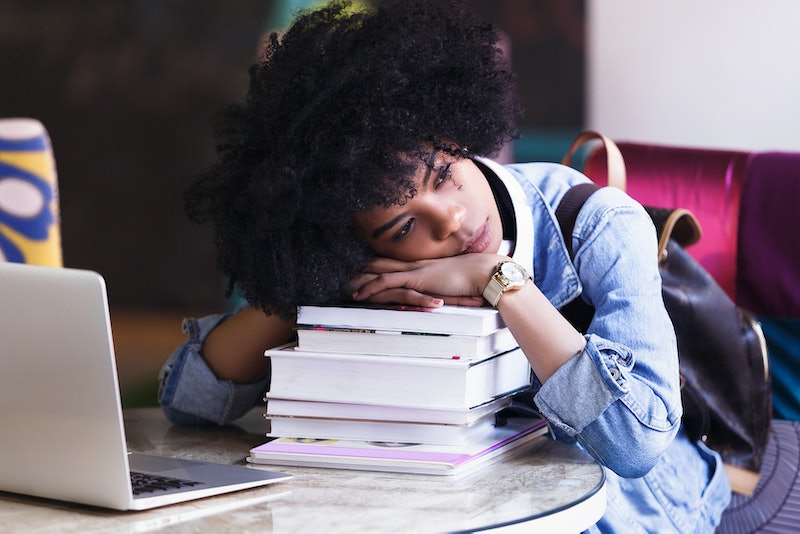 Not getting enough sleep these days? Your brain might be shrinking. That's right, according to a new study, lack of sleep may result in brain shrinkage — as in a decrease in the size of your brain. I don't know about you, but my sleep-deprived (and potentially doomed) brain is freaking out right now.

A recent article in CTV News reported that a new study, published in the journal Neurology, concluded that sleep problems could lead to a "consequence of brain atrophy,” or the loss of brain cells, according to Health Grades. In other words: Lack of sleep could result in a decrease of brain size over time. Claire Sexton, the lead author for the study and Oxford researcher, told CTV News how this study further emphasizes the importance of getting your 8+ hours in:

"This is a really important finding because we are trying to find out what the purpose of sleep is, and why it is important that we get sleep," lead author and Oxford researcher Claire Sextontold CTV News. "We found sleep problems were related to rate decline in some areas of the brain."

So how, exactly, did they come to such terrifying conclusion (that my slightly-smaller-than-those-who-don’t-have-sleeping-problems brain can barely wrap itself around)? For the study, researchers observed 147 adults over several years. Every 3.5 years, participants underwent an MRI brain scan, as well as answered sleep-related questionnaires.

HuffPo notes that researchers noticed scans of the 35 percent of participants who experienced sleep-related issues showed a faster decrease in several portions of their brains. To be more specific, decrease occurred frontal, temporal, and parietal lobes. Health Pages explains that these are the regions of your brain that control functions like behavior, movement, memory, "understanding special relationships," as well as speaking and hearing (just to name a few). “Yikes” is right.

The overall point these researchers are trying to make? Sleep is very, very, very important, and you should do it. Stressed into a fit of potential insomnia over this news? It's cool, we have answers:

For one, you should probably know how much sleep you should be getting a night. Getting eight plus hours is sort of like the eight times eight rule (drink eight, eight-ounce glasses a day) with water: not necessarily true for everyone. New research suggests that most people don't even need that full eight hours, and that there's a good sweet spot between too few and too much — which can actually lead to complications as well. There's also a nifty video, created by a professor at the University of Hertfordshire, called the "The Sleep Test" that can tell if you're sleep-deprived or not. It's also never too late to quit some of those bad sleep-related habits, like working out right before bed or keeping the smartphone near the bed.

Sure, we already knew that sleep is important, but it's pretty sobering to hear that not doing it could result in the literal shrinkage of arguably the most important organ in your body. Sometimes it takes a little scare to get healthy, which, fortunately in this case, means making more time to bond with your bed. When you think about it, that actually sounds pretty sweet!