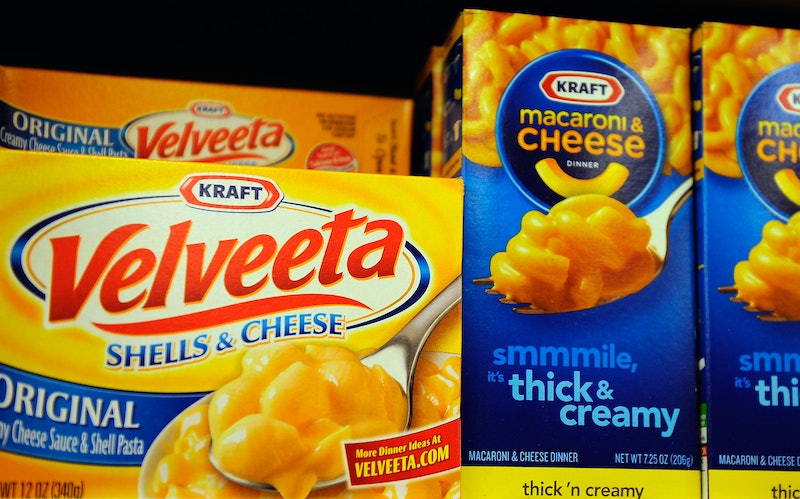 Does anyone else ever struggle to figure out what to do with leftover mac and cheese? It never really tastes as good the next day — but here’s a no-fail way to breathe new life into it: Make mac and cheese burritos.

You heard me. Macaroni and cheese. In a burrito. Genius? Yes. So much yes.

According to the food blog Oh Bite It (via Elite Daily), they’re actually pretty to make, too. All you need to do is mix up some green chiles with your already-cooked mac and cheese and roll the concoction up in a bunch of flour tortillas. Then you fry ‘em, which actually makes them sound more like mac and cheese chimichangas to me, but whatever. Semantics. If you wanted to try to make them a bit less bad for you, you could probably spray the tops with cooking spray and bake them instead (about 15 minutes at 400 degrees should do it) … but let’s face it: We’ve already taken one horrendously bad for you food and shoved it inside another horrendously bad for you food, so we may as well go all out and fry them. YOLO. Or something.

Anyhoo, head on over to Oh Bite It for the recipe. I’ve also taken the liberty of assembling a number of other ridiculous ways you could incorporate your leftover mac and cheese into new and exciting dishes, so if you’re feeling creative, have at these:

This is a staple in most New York pizzerias, although I’ve never been brave enough to order it. Still, though — whip up some pizza dough (I like Joy the Baker's no-knead whole wheat pizza dough), slap your mac and cheese on top, and you’re good to go.

I feel like I shouldn’t be surprised by the fact that frying makes everything taste better … and yet I still am. Case in point: The first time I had fried mac and cheese, I went into the experience super skeptical and walked out of it a believer. Seriously, you guys. This stuff is the best. And hey, while you're at it, why not throw your fried mac and cheese on top of some fried potatoes?

3. Mac and Cheese and Waffles

Chicken and waffles is already a beloved savory waffle classic, so why not mac and cheese waffles?

Sure, you could chop up your hot dogs and mix the pieces in with your mac and cheese — but you could also just go ahead and top your hot dog with the stuff.

5. Mac and Cheese in a Bread Cone

This actually exists. You can get it at Disney World. Don’t say I never did anything for you.

In my perfect world, everything comes on a biscuit; if you’re more the English muffin type, though, I’m sure an egg and mac and cheese sandwich would be great with all those nooks and crannies, too. Or on a bagel. Or whatever. Breakfast ahoy!

A variation on a theme. Best implemented on Tuesday.

What? Savory cupcakes are thing!