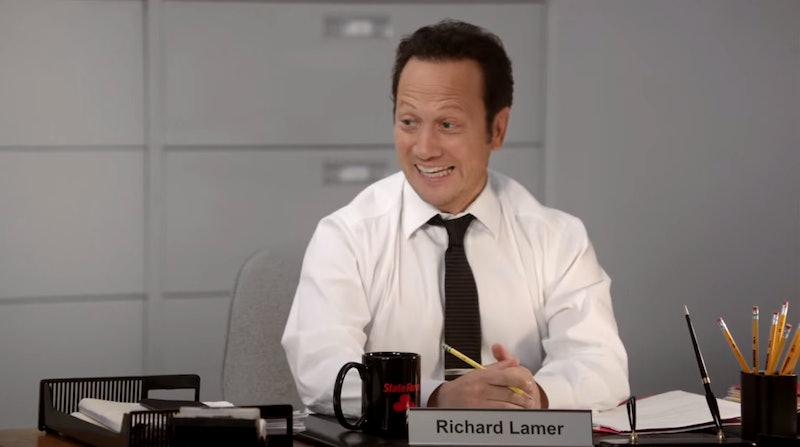 The ultimate office "that guy" is back: Yup, The Richmeister has returned. In a new State Farm Discount Double Check ad, Rob Schneider revives that ‘90s era-o-rama Saturday Night Live character who cannot stop riffing on his coworkers' names. Why does The Richmeister pepper his visibly annoyed colleagues with nicknames? Perhaps it amuses him, perhaps it's a nervous habit, perhaps he doesn't realize it's obnoxious, or perhaps he does it out of necessity. Perhaps he is like a shark. A shark whose life depends not on constant motion, but on constant nickname utterance. Lots of equally plausible explanations to consider.

In the commercial, The Richmeister sits at his desk and spouts off a never-ending list of monikers at whoever is brave enough to use nearby the copy machine. Awwwww, it's just like old times. (What are they doing at the copy machine? You better believe they’re makin’ coh-pehhhs.)

So, where does one go from here? Oh, you know. You totally know. After one sees the Richmeister State Farm TV spot, one spends some time searching the Internet for old SNL sketches (shout-out to Yahoo Video). Because one is a sucker for any SNL sketch from the '90s.

Watching this one felt like unearthing a time capsule that'd been buried by a class of middle schoolers in the early '90s (other items included in this hypothetical time capsule: pogs, a Puppy Surprise stuffed animal, and a Chicago Bulls poster):

You can come up with a stronger nickname for Steve and Sandy's baby, Richmeister. I believe in you: