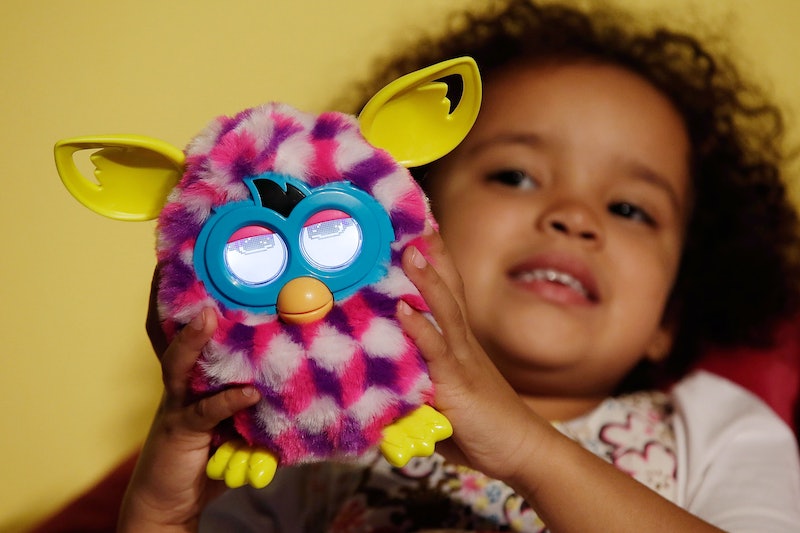 Childhood is generally thought of as an idyllic time, full of the simple joys of playing with your favorite toys. But often, once we get old enough, we realize a lot of the toys we thought were sweet and innocent are kind of … not. At all. In fact, a second glance with a grown-up set of eyes proves that those toys are way creepier than we ever knew they could be. So in honor of Throwback Thursday, we’re taking a look at why everything you thought about your childhood toy chest was wrong. From killer dolls to board games with weirdo premises, these playthings are more in line with the Chuckys of the world than most of us would probably like to admit. Brace yourselves — this could get messy.

You’ll notice, by the way, that there are an awful lot of dolls on this list. Why? I’ve written about this before elsewhere, but I think it goes beyond just plain ol’ pediophobia, or fear of dolls. My working theory has something to do with what’s called the uncanny valley. Although it primarily applies to robots, the uncanny valley is that point at which something that looks almost like a human, but not quite like one, stops being something we can identify with and starts being something that repulses us instead. Talking dolls? Dolls with moving mouths? That’s some creepy shit right there. Here are 10 more ultra creepy childhood toys that you'll never see the same way again.

Produced by Hasbro from 1991 to 1993, Puppy Surprise probably represented a scenario many parents feared coming true in real life: You bring an adorable dog home and the kids name him something like Mr. Snuggles … only then, you discover that Mr. Snuggles is actually Ms. Snuggles, and she just had puppies all over your kitchen floor. Sure, the fun of Puppy Surprise was not knowing how many puppies your stuffed toy had until you opened the box — but there’s nothing quite like suddenly ending up with a litter of pups you’re not prepared to raise. Also, you kind of have to wonder how many “Mommy, where do babies come from?” conversations this toy sparked.

Cabbage Patch dolls have enough creepy urban legends floating around them as it is — for the curious, no, you won’t get issued a death certificate if you send your doll in for repair, and no, they weren’t designed to desensitize people to mutants following a thermonuclear war — but the Snacktime Kid doll is aaaaaaaaall truth. Released in 1996, the dolls “ate” plastic food fed into their motorized mouths; the only trouble was, no one bothered to build an “off” switch into the things. Once those vicious little mouths got a hold of an object, they would keep eating it until they “swallowed” it — no matter what “it” actually happened to be. A massive recall was issued when reports of the dolls eating children’s fingers and hair started rolling in. In some cases, the Snacktime Kids yanked kids’ hair right out at the scalp. Yikes.

3. Ring Around the Rosie Doll

Remember this little gem from the mid-‘90s? When you held her hands, she sang the nursery rhyme “Ring Around the Rosie” for you. “Ring Around the Rosie” may not actually be about the black plague, but when this doll came out, it was a commonly repeated theory; as such, “Rosie the Death Doll” seemed a more accurate moniker at the time. I still can't shake the weirdness. Besides, talking dolls are always creepy, right?

There’s actually a similar doll still on the market today, by the way; the Mooshka Sing Around the Rosie doll looks more like a rag doll than a baby doll, but if that floats your boat, you can snag ‘em at most toy stores.

It takes on a whole new meaning in light of New York’s struggles with actual bedbugs, doesn’t it?

I had aged out of the target demographic by the time Furbies came along in 1998, but I didn’t need to be a third grader to know that these suckers are terrifying. Seriously — there is nothing about a Furby that isn’t creepy, from the “Furbish” language it speaks when you first boot it up to the way it can interact with others of its kind. The creepiest thing by far, though? Is the fact that it can learn. If ever there was a toy that had the capacity to become sentient and attempt to take over the world … Furby was it. They were revived in 2012; the video up top is what happens when you make a new Furby watch a commercial for the 1998 Furby. All I can say is … god help us all.

I don’t know about you, but the last thing I needed as a kid was a Barbie doll as big as I was, staring at me from the corner of my room while I slept. If we were close enough in size to swap clothes, it was only a matter of time before she tried to Single White Female me.

Baby Alive has been around since 1973; the 1992 edition, however, was the first one that spoke. It apparently didn’t do well, though, largely because of the loud gear noises that emerged from its chest cavity while it was in operation and the fact that its voice sounded deep enough to be an adult’s. The non-talking version is pretty weird all on its own, though — does the sucking movement of its mouth kind of weird anyone else out?

I can’t be the only one who was traumatized by Operation as a child, right? I’m unclear whether the commercials that inspired my brain to create a bizarre and disturbing recurring nightmare were actually intended to be frightening, but seriously. The goal of the game is to rip out a man’s innards. As Geek Nation pointed out, unleash Eli Roth on it, and you’ll have one helluva a horror movie.

What do all little girls want? I know! To become a mother of five at an extremely young age! That’s the best idea in the history of the universe! . . . said no one ever. And yet Quints were enormously popular in the early ‘90s. Curious, no?

I loved my Tamagotchi, but I will never forget the revulsion I felt the day that it grew into the disembodied head of an adult male. I’m not kidding. Apparently his name is Bill, and he was horrifying to 11-year-old me. I wanted a pet, not a dude. Hopefully the version of the Tamagotchi that’s set to come back this fall will be dude-free. Because that was weird.