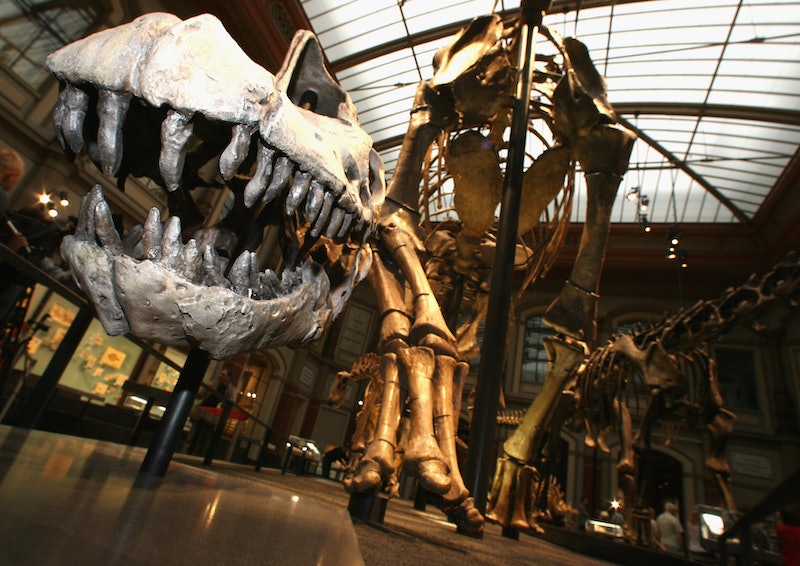 Theoretically, we all know that millions of years ago, things were bigger. Like, significantly bigger. Everything was huge, in fact. Especially dinosaurs. We know that dinosaurs were pretty large. But the new species of dinosaur found in Argentina, named Dreadnoughtus (after the battleships of the 1900s) was particularly gigantic. In fact, it's probably one of the largest creatures to have ever walked the earth — and scientists now have a nearly complete skeleton of it.

In a new paper published by Scientific Reports, scientists detail the enormous creature, the skeleton of which they have now found about 70 percent (about 145 bones total). Roughly the length of a basketball court with the height of a two-story building, the plant-eating sauropod walked its giant self around South America roughly 77 million years ago. Its tail alone measured 29 feet; its neck was a whopping 37 feet long. Those Longnecks, from the Land Before Time? Smaller than this guy, in all likelihood.

Even crazier? As GINORMOUS as the creature was, it wasn't even fully grown when it died. “That was a real shock to us,” paleontologist Kenneth Lacorvara said to the Guardian. “When you look at the bones of dreadnoughtus, it’s clear this individual was still growing fast. There are no indications of a cessation of growth.”

Though the skeleton's in the U.S. right now, all the bones are supposed to be going back home to Argentina by next year. There, they'll be put together — with a lot of hefting and heaving, I'd imagine — and exhibited at a museum in Río Gallegos in Santa Cruz Province.

"Titanosaurs are a remarkable group of dinosaurs, with species ranging from the weight of a cow to the weight of a sperm whale or more," said Matthew Lamanna, PhD, who worked on the dig, according to Forbes. "But the biggest titanosaurs have remained a mystery, because, in almost all cases, their fossils are very incomplete."

From the size of the bones, scientists were able to estimate how much the huge thing weighed: roughly 65 tonnes. It's heavier, in other words, than most things. Including:

Yep, it weighed more than a United Airlines plane. The big kind, with 38 rows.

We like to think of the T-Rex as the be-all and end-all when it comes to terrifying prehistoric creatures. But the Dreadnoughtus weighed more than seven of those chompers. And it had a "weaponized tail." Let's declare a new winner, here and now.

Many, Many Giant, Prehistoric Penguins

Didn't know that our waddling friends were actually HUGE, 37 to 40 million years ago? Well, huge, for penguins. They were over six feet tall, and weighed roughly 250 pounds. Which, OK, is measly compared to the 132,277 pound sauropod. You'd need about 529 prehistoric penguins to weigh as much as the Dreadnoughtus.

Your average African elephant weighs just over five tonnes. So, yah, even twelve of those big guys might fall just under the weight of one particularly pudgy Dreadnoughtus. Incidentally, the prehistoric creature may be (thankfully) extinct, but did you know that elephants in Central Africa are also dying out? Between 2002 and 2013, they decreased by a staggering 65 percent.

Yah, no one knows yet why this happened, but 53 tonnes of (dead) fish washed up in western Mexico yesterday. Regardless, a lakeful of dead fish still weighed less than ONE huge dinosaur.

Obviously. But do you remember how much that thing weighed? Talk about dinosaurs.