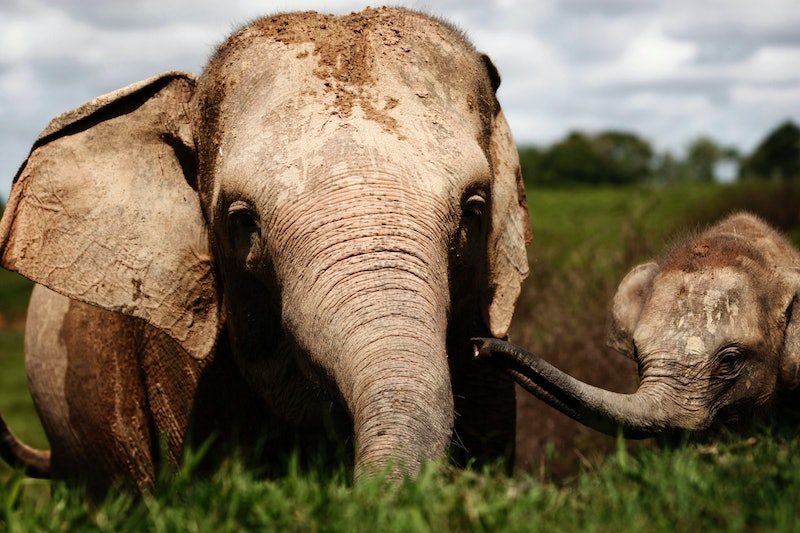 Happy World Elephant Day! Today is the day that we pay homage to one of the world’s most magnificent creatures — and also take pause to realize just how urgent the situation is for elephants in Asia and Africa. Because the atrocities that are committed against elephants, if not soon stopped, will most certainly lead to their extinction.

The first World Elephant Day was established in 2012 as a day to bring attention to the ongoing slaughter of these beautiful animals by poachers and polluters. While poachers definitely contribute a heavy hand to the dwindling numbers of elephants, loss of their habitat, and the inhumane and harsh conditions of those trapped in captivity are also standing in the way of the flourishing of this species.

The situation for the elephants is dire. With le ss than 500,000 left (say that out loud to really feel how much it hurts), we’re quickly moving toward a future without elephants. Can you imagine a world without them? It’s on par with a world that never has any sun or flowers or laughter.

World Elephant Day asks “you to experience elephants in nonexploitive and sustainable environments where elephants can thrive under care and protection.” In my humble opinion, every day should be World Elephant Day, because every one of their lives is worth it.

In that spirit, here are 21 facts that you should know about elephants.

1. Female elephants are pregnant for a whopping 22 months.

2. The saying is true: Elephants never forget. In fact, they'll hold a grudge for their entire lives.

3. Elephants have the longest eyelashes in the world. They're about five inches in length.

4. Not only do elephants experience grief and mourn their dead, but some scientists believe that elephants also cry.

5. Elephants have rituals for their dead. In addition to mourning the loss, once they know a fellow elephant has passed away, they will dig a grave and cover the body with dirt and branches. They will even stay at the grave for days, continuing their mourning process.

6. Elephant herds are matriarchal. That said, males leave the herd between the ages of 12 to 15 and either lead solitary lives or live temporarily with other males.

7. In the wild, elephants can live to be in their 40s. In captivity, they can live even longer.

8. Homosexuality has been observed in elephants.

9. There are two different breeds of elephants: African and Asian, although there is speculation that a third breed, a forest-dwelling African elephant that is "genetically distinct" from the other two breeds, exists.

11. Unlike many animals, elephants are smart enough to recognize themselves in the mirror.

12. Despite having some really tough skin, elephants can still suffer from sunburns. To protect themselves, they throw sand on their backs and heads.

13. Elephants have a sense of humor, which makes sense, because if you can grieve, you should probably be able to joke sometimes, too.

14. To stay healthy, an adult elephant needs to consume at least 55 gallons of water a day.

15. Elephants are vegetarians and spend the majority of their days, about 16 hours, foraging for food and eating it.

16. An estimated 35,000 elephants were killed in Africa last year alone.

17. In 2013, poachers poisoned 300 elephants with cyanide in Zimbabwe's Hwange National Park so they could profit from the ivory of the elephants' tusks. It was called the "worst single massacre in Southern Africa for 25 years," according to IUCN. Ivory trade was technically made illegal in 1989.

21. New York City is actually America's largest ivory market, with the majority of it illegally coming through New Jersey. On August 5, Governor Chris Christie signed a bill that would (finally) ban the sale of ivory in New Jersey. And on World Elephant Day, New York Governor Chris Cuomo signed a "new law to prevent the trade of illegal ivory articles by strengthening criminal and civil penalties for buyers and sellers whose actions are endangering elephant populations worldwide."