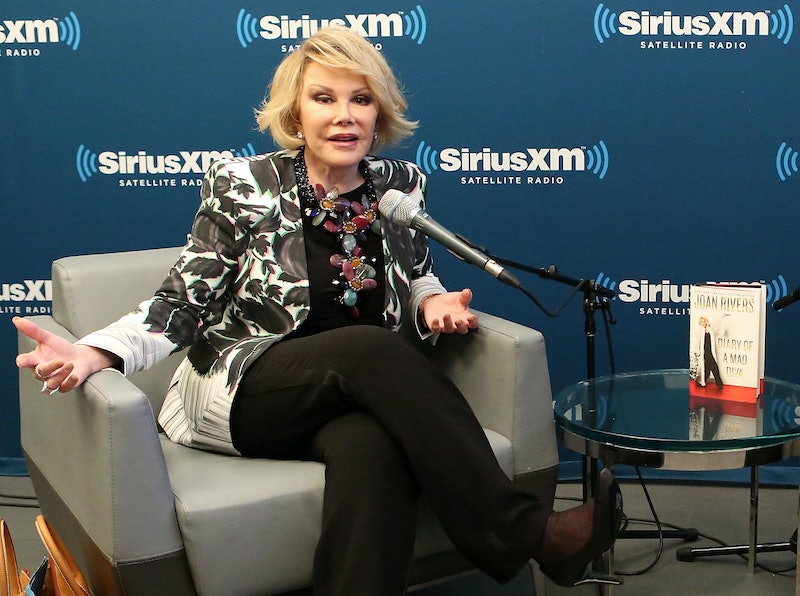 She was fabulous. She was hilarious. And she's the reason women everywhere are willing to be their salty, brash, politically incorrect selves without shame or reservation. When Joan Rivers passed away at the age of 81 on Thursday, we not only lost a comedy great, we also lost something of a spiritual guide. "It comes with age, knowing it's their problem, not mine," Rivers once said. And to me, that is her influence on womankind in a nutshell. She refused to be anything anyone expected her to be, and she was absolutely right: Any dissent on that matter was not her problem. And as the many, many free-thinking, free-wheeling, dick-joke-loving women of the world know, Joan taught us all that being a woman had absolutely nothing to do with going through life as shrinking violet. She taught us that the notion of being "ladylike" is not only a fallacy, but a steaming pile of absolute bullshit.

Rivers dispelled the notion that women couldn't be comedians long before that absurd question about "whether or not women were funny too" hit the post-Bridesmaids zeitgeist, and she did so in a blaze of glory while donning a parade of fabulous, exaggerated duds. Little did 1-year-old me — who was busy learning the words "fuck you" for the first time while sitting in a car seat while my mother defensively drove in the midst of "fucking assholes" on the I-5 in California — know, Rivers had a message for me. Joan not only understood my saltier proclivities, but championed them. To those who thought she was unladylike for telling ridiculously filthy jokes, flippantly using that ecstatic middle finger of hers, publicly loathing the existence of small children, or knowing that a pearl necklace wasn't just something your grandmother passed down through the generations, Rivers had more than few impregnable words.

Even when I've disagreed with Joan — for example, in times when she made jokes about Adele's or other celebs' weight — I've still found myself admiring her resolve in the face of those who deem her inappropriate or her style of comedy unacceptable. She was so fiercely herself that she refused to ever cower and admit a lapse in judgment or a moment of weakness. She was Joan Fucking Rivers, and you either loved her or you could get the hell out of here.

In her documentary, Joan Rivers: A Piece of Work, Rivers dealt with a rather emphatic heckler who was offended by her no-holds-barred style. In one short retort, Rivers fired back with a wickedly solid reply:

Oh you ass. Let me tell you what comedy is about ... oh, you are so stupid. Comedy is to make everybody laugh and deal with things, you idiot ... and in case you can hear me in the hallway, I lived for nine years with a man with one leg, OK, you asshole? And we're gonna talk about what's it like to have a man who lost in World War II and never went back to get it. Because that's fucking littering. So don't you tell me what's funny.

Rivers transferred this attitude to every part of her visible life. She doled out fashion advice, but never cared what anyone thought of her wardrobe. She told people how to live their lives, but never worried when others questioned hers. She was unabashedly Joan, and if anything, she was more of a woman because of that.

As a writer who once suffered a crippling fear of making accidental double entendres or letting foul-mouthed outbursts betray my true self, thus bringing out some imaginary security force that was sitting in the wings just waiting to revoke my womanhood membership card for having violated the terms of Ladydom, Joan's refusal to fit in some stupid box dreamed up by years of unrealistic expectations for women was more than invaluable. It was everything.

It allowed me to be the improper, salty broad that I am today. It taught me that there was no such thing as "appropriate" or "ladylike." I, like Joan, am a smart, funny, interesting woman; I am ever striving to be every bit myself the way Joan was every bit Joan. And folks, that's all that's required to be truly ladylike. Joan taught us that.

I will never agree with everything Rivers said or did. That's what happens when someone boldly lives her life without a filter. But I will never, ever underestimate the work that she did by simply being exactly who she wanted to be, everyone else be damned. And anyone who disagrees can just go to hell, you ass.