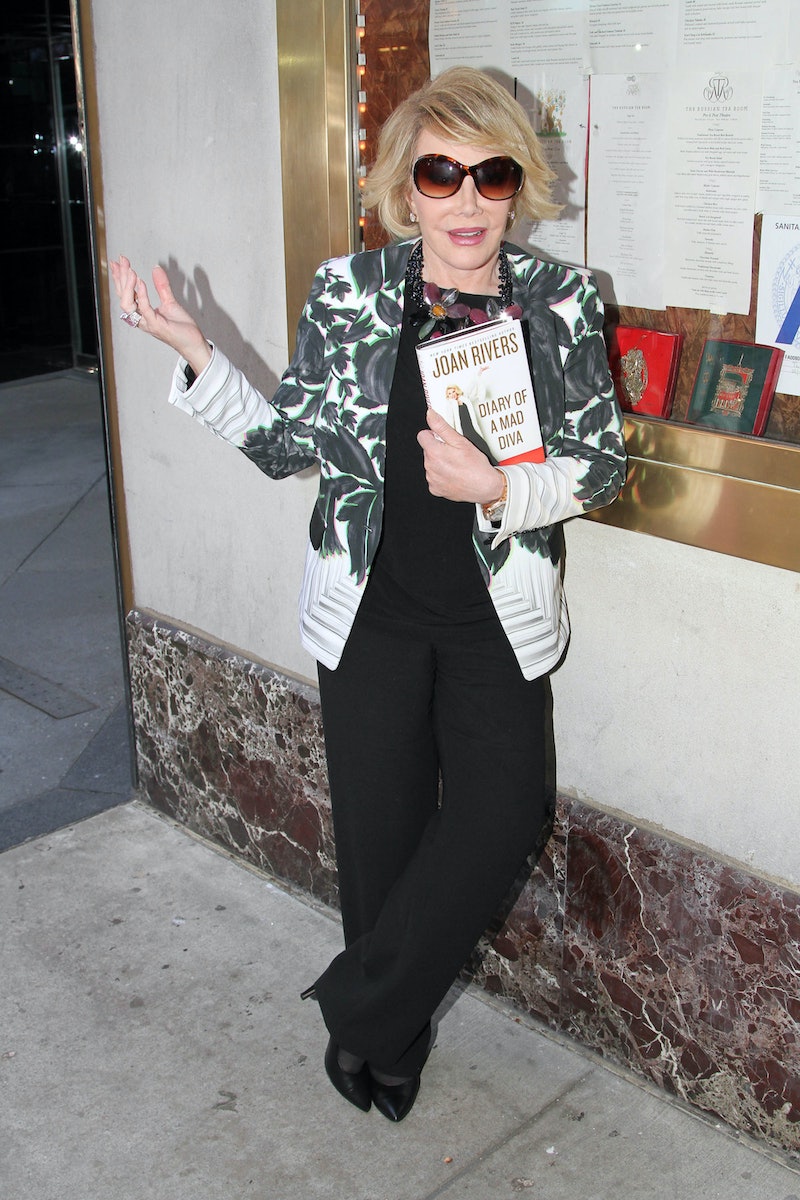 Joan Rivers, the beloved comedian who died Thursday at the age of 81, was nothing if not industrious. The first woman to host her own late night talk show and the first female comedian to perform at Carnegie Hall, Rivers career included guest hosting the Tonight Show in Johnny Carson's day and years of unforgettable standup routines that paved the way for the likes of Sarah Silverman, Chelsea Handler, and other women comedians who refuse to play nice. She also won Celebrity Apprentice and squeezed in a critically acclaimed stint on Louie.

A Piece of Work, the 2010 documentary about her life and career, shows Rivers feverishly insisting on always doing more, thinking ahead, staying relevant. So it's perhaps no surprise that in addition to her red carpet commentary, Fashion Police hosting gig, and everything else she was doing right up until a few weeks ago, Rivers also published 12 books. Count 'em: 12. As you can imagine, those books are chock full of the kind of biting jokes that made Rivers hilarious and irresistible for so many years, but they also contain more serious reflections on her craft, marriage, motherhood, and dealing with hardship. Here are five great quotes from her books:

“A comic onstage must be in command, an authoritarian figure. Ladylike ways do not work for my audiences. I have to be the toughest one in the room or they will talk right through me. They have to know I am like a lion tamer who says, “If you come near me, I’ll kill you.” - Enter Talking , 1986

"There are many self-help books by Ph.D's, but I hold a different degree: an I.B.T.I.A. I've Been Through It All. This degree comes not on parchment but on gauze, and it entitles me to tell you that there is a way to get through any misfortune." - Bouncing Back , 1997

“The only good thing about age is that sooner or later all of the SOBs who dumped you are going to die.” - I Hate Everyone... Starting With Me , 2012

"Woke up not feeling well. I spent the entire day online on WebMD. ... I can say with 100 percent certainty that I have pleurisy, tuberculosis, brain stem cancer or an enlarged prostate. I found a great cure for whatever ails you. God bless the Internet! A coffee enema. ... The only negative: I can never go back to Starbucks." - Diary of a Mad Diva , 2014