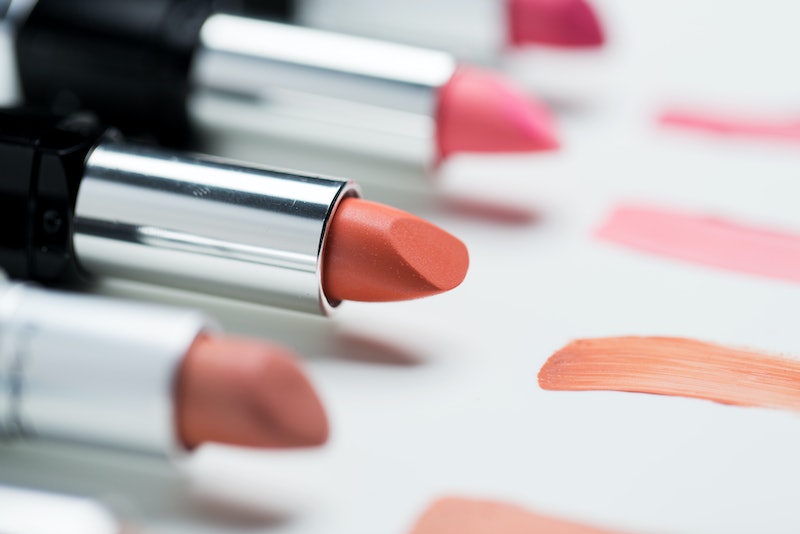 Bad news for lipstick addicts: According to a study conducted by Environmental Health Perspectives, your favorite lip color contains a boatload of metals that are harmful to the body — all this after a 2011 report by the F.D.A. in which they found traces of lead, which is commonly known to be poisonous, in 400 different lipsticks. It's not just that the lipstick is applied directly to our skin, which absorbs some of the materials, but also that we're constantly ingesting what we've just applied — hence the reason the color disappears from your lips, and reapplication is necessary.

According to the New York Times, the new study found concentrations of aluminum, manganese, and chromium in lipstick, along with aluminum, which is added as a formula stabilizer, titanium oxide, which lightens red pigments to pinker shades, and mica, which is added to many tubes to create a shimmer effect. The F.D.A. allows lead in lipstick at about one part per million. According to the New York Times, some formulas evaluated clocked in at between .37 parts per million in lighter colors, and up to a whopping 8.9 parts per million in darker and brown-toned colors. The real issue: No one just applies lipstick once in her life.

Health problems don't come after one swipe, but metals build up in the body over time and are difficult to eliminate. If you reapply lipstick more than 20 times a day, as found by the study, over the years your body is holding on to dangerous levels of lead and other metals. Excessive amounts of lead can lead to lead poisoning, consequences of which are inhibition of physical and mental development, especially in children, and in very extreme cases, death.

A 26 year-old shopper, who asked that her name be withheld, recounted being warned at a young age. "I remember hearing the myth that a woman ingests four to seven pounds of lipstick in her lifetime when I was young, but it didn't stop me from wearing it or even to consider the ingredients I may or may not be ingesting."

Some people are calling on the cosmetics industry to offer non-toxic and non-metallic formulas. Personally, I think I'll reconsider before running to the bathroom to freshen my lip color throughout the day. In the mean time, will it cause you to check the ingredients on you favorite tube, or reconsider before reapplying?

More like this
The Case For Using Your Fanciest Beauty Products Every Single Day
By Carolyn Steber
Caliray's New Surfproof Setting Spray Is The Ultimate Skin Refresher
By Olivia Rose Rushing
The 13 Best Skin Tints For That Dewy, “Your Skin But Better” Glow
By Olivia Rose Rushing
6 Asian Beauty Rituals That Will Soothe Your Skin, Scalp & Mind
By Jennifer Li
Get Even More From Bustle — Sign Up For The Newsletter
From hair trends to relationship advice, our daily newsletter has everything you need to sound like a person who’s on TikTok, even if you aren’t.