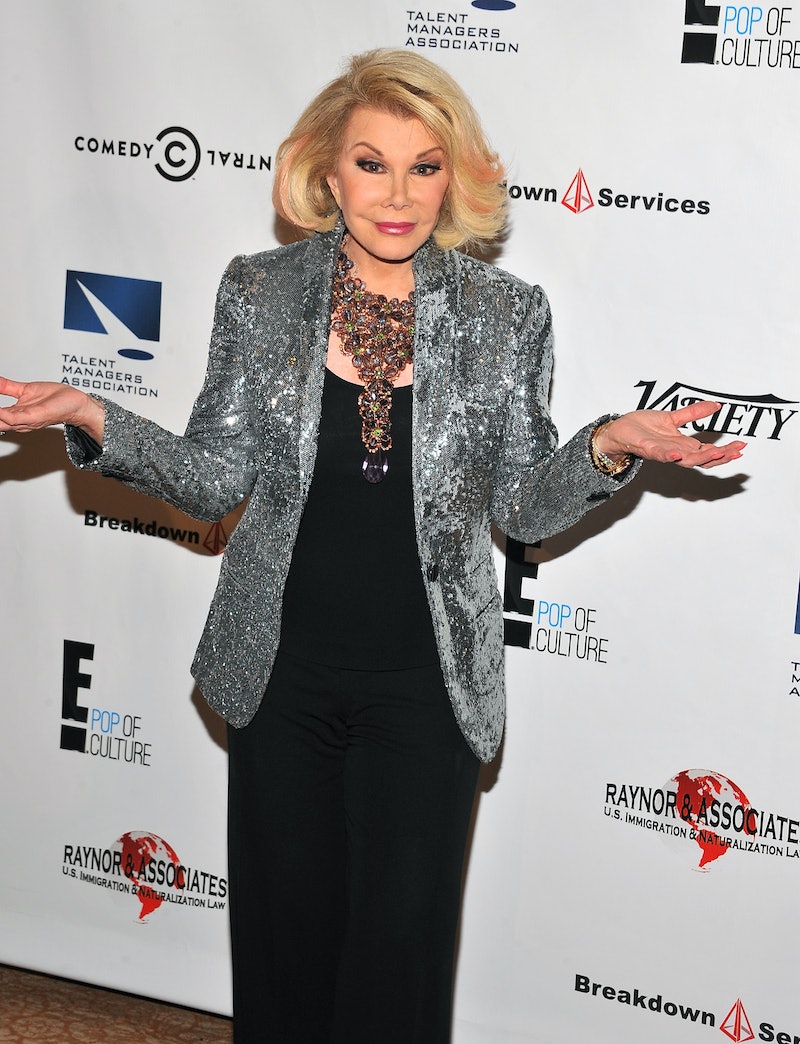 On Thursday afternoon Melissa Rivers delivered the devastating news that her mother, comedian Joan Rivers, has passed away at the age of 81. Joan had been in the hospital since Aug. 28, when she stopped breathing during a throat procedure, and was placed on life support shortly thereafter. While fans across the world are clearly saddened by the news of her death, in her statement, Melissa said, "My mother’s greatest joy in life was to make people laugh. Although that is difficult to do right now, I know her final wish would be that we return to laughing soon."

As someone known for her ability to turn almost situation into comedy, it is not at all surprising that in the past, Joan has joked about her own death and funeral, in a way that will probably make you laugh and cringe at the same time — no doubt the reaction she would want you to have. So what better way to honor Joan than to try and make some of her comedic wishes a reality the best way we can: through GIFs.

Let's start with the basics. In her 2012 book I Hate Everyone...Starting with Me, Joan starts off her funeral planning with the following:

When I die (and yes, Melissa, that day will come; and yes, Melissa, everything's in your name) I want my funeral to be a huge showbiz affair with lights, camera, action... I want Craft services, I want paparazzi and I want publicists making a scene!

In her book, Joan continues on to say:

I don't want some Rabbi rambling on, I want Meryl Streep crying, in five different accents. I want Bobby Vinton to pick up my head and sing "Mr. Lonely."

As you wish, Joan.

And we can't forget about Bobby.

The passage from Joan's book ends with a few more guidelines.

I want to look gorgeous, better dead than I do alive. I want to be buried in a Valentino gown and I want Harry Winston to make me a toe tag. And I want a wind machine so that even in the casket my hair is blowing just like Beyoncé's.

Joan always looked gorgeous and perfectly put together and as far as the Beyoncé hair goes, here's some inspiration.

In another passage from I Hate Everyone, Joan doesn't just joke about her funeral, but also her death itself.

When my time comes I'm going to go out in highs type. I have no intention of being sick or lingering or dragging on and on and boring everyone I know. I have no intention of coughing and wheezing for months on end. One morning you'll wake up and read a headline: Joan Rivers Found Dead...On George Clooney's Face. Clooney Was So Bereft All He Could Say Was, "Xjfhfyrnem."

While I don't think Clooney has ever said "Xjfhfyrnem" publicly, here's how he looks when he's bereft.

Rivers also discussed her death in her most recent book, Diary of a Mad Diva, though

Make sure the guy who cuts the tombstone is a good speller.

Don’t break the news to my friends by singing, “A-Tisket, A-Tasket, Joan’s Finally in a Casket,

Even though we spent winters in Mexico, do not list my next of kin as Poncho the Donkey.

Please make sure no one knows Melissa’s last words to me were, “Just sign this.”

To make my cold-as-ice WASP friends cry like the rest of the mourners, Melissa and Cooper should just tell them they’ve “run out of Wonder Bread.”

From all these quotes, it's clear that yes, Joan truly wanted to make people laugh, no matter what subject they were discussing. I hope she knows that though she will be sorely missed by so many, she will never stop making us laugh.