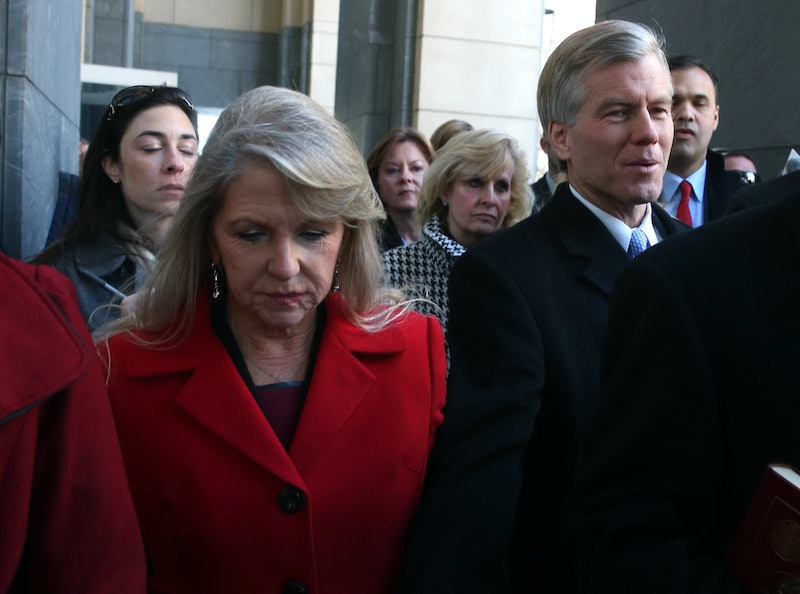 Following a long federal trial that revealed a years-long political scandal and major cracks in their picture-perfect marriage, former Gov. Bob McDonnell and his wife, Maureen, were convicted on charges of conspiracy, bribery and extortion on Thursday. Bob McDonnell was found guilt on 11 counts, while Maureen McDonnell was convicted on nine — and now face decades in prison.

The McDonnells were indicted by a federal grand jury in January, after being told in December 2013 that charges would be brought against them for taking illegal cash and gifts from vitamin supplement executive Jonnie R. Williams. The news of the illegal activity between the McDonnell's and Williams was first reported in July 2013 by The Washington Post, which found that the former Virginia governor and his wife received about $145,000 from Williams between 2011 and 2012, but never disclosed the money as a gift or a loan.

In all, the McDonnell's took nearly $200,000 from the executive. Some of the money received was given to a corporation created by Bob McDonnell. Williams also gave money to the family, including thousands to help pay for the wedding of the McDonnell's daughter, and paid for lavish shopping sprees for Maureen McDonnell. As the McDonnell's received the money, they reportedly promoted Williams' vitamin company.

Bob McDonnell was once seen as a rising star of the Republican Party, and widely rumored to be among the candidates for Mitt Romney's running mate during the 2012 presidential election. McDonnell didn't resign from his position once the scandal broke, but let his term expire. Before leaving office in January, the embattled governor apologized to the residents of his state:

I deeply regret accepting legal gifts and loans from Mr. Williams, all of which have been repaid with interest, and I have apologized for my poor judgment for which I take full responsibility. However, I repeat emphatically that I did nothing illegal for Mr. Williams in exchange for what I believed was his personal generosity and friendship.

McDonnell and his wife were reportedly shocked by Thursday's verdict. His lawyer reportedly told the media following the verdict that he will appeal on behalf of his client.

According to ABC News, the sentencing is not for several months — Jan. 6, 2015, to be exact. How much prison time are the McDonnell's facing for their 20 counts total? A lot.

Both Bob and Maureen McDonnell will serve at least the mandatory minimum sentences, which are at least one to two years per fraud count in the federal system. The maximum federal prison sentence for fraud and corruption is 20 years. According to NBC News, Bob McDonnell, along with his wife, face up to 30 years in prison.

The Justice Department seems pretty intent in turning the couple into a cautionary tale for other politicians out there. Assistant Attorney General Leslie R. Caldwell said Thursday in a statement:

In pursuit of a lifestyle that they could ill afford, McDonnell and his wife eagerly accepted luxury items, designer clothes, free vacations and the businessman’s offer to pay the costs of their daughter’s wedding. In return, McDonnell put the weight of the governor’s mansion behind the businessman’s corporate interests. The former governor was elected to serve the people of Virginia, but his corrupt actions instead betrayed them. Today’s convictions should send a message that corruption in any form, at any level of government, will not be tolerated.