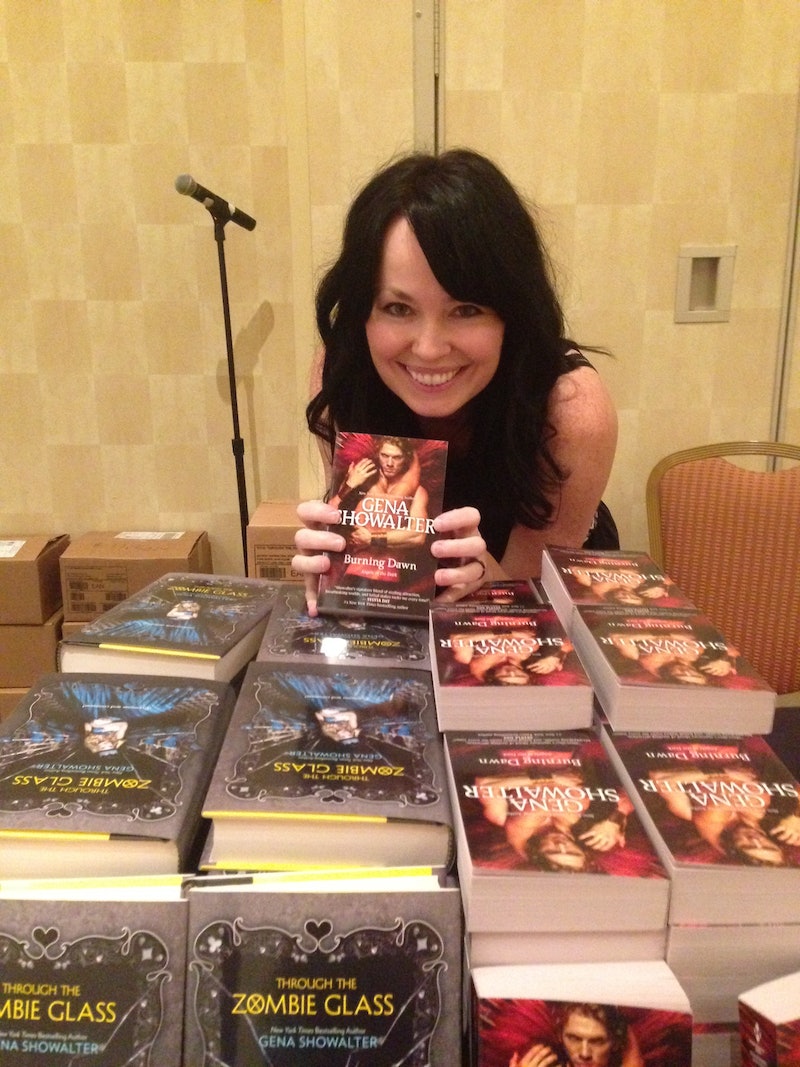 There's a gap between romance writers and mainstream "literary" writers that neither side seems particularly eager to cross. Romance writers do their steamy thing, mainstream literary writers agonize over their craft. They coexist, more or less, but they don't act like acquaintances, much less friends. The literary crew tends to look on the romance market with a bit of a judgmental smirk — don't deny it, literati — while romance novelists don't appear to be paying attention to the literary people at all.

When I asked New York Times-bestselling romance novelist Gena Showalter about the difference between the world of romance novels and the broader publishing world in general, she responded, “All I know is that the romance writers and readers are AWESOME!” It's not that she's uninformed, but that that the greater interests and trials and tribulations and successes of the larger literary publishing world don't seem to interest her as much. She wasn't stressed about situating her work within a larger publishing scene, or justifying it to the snobbish. For Showalter, romance writing was sufficient unto itself.

“I’ve always written romance. Have honestly never written anything else,” Showalter told me. “I’ve always been fascinated by relationships. What makes them work, what tears them apart. If love is a choice or an emotion. At the end of the day, I just like happily-ever-afters.” It's a clean-cut approach to narrative, concerned simply with the mechanisms of relationship — no concern with her place in the literary canon or how meta is too meta? It's story at its most primal level.

This obsession with happily-ever-afters is part of why romance novels sell like hotcakes (happily-ever-afters plus scenes that take full advantage of the word “throbbing,” of course). But for a genre so eternally popular, so wildly lucrative, romance novels are still stuck with a cheap stigma. They're "not serious literature." They're "poor quality." They're "not real books." (Sometimes the stigma is deserved, sometimes not, but it tends to hover over romance novels, regardless of their individual merits.)

Dig a little deeper and you'll see why. As romance novelist and academic Maya Rodale writes, “When a woman reads a romance novel, she is putting her own pleasure first. That small act of rebellion is perceived as a threat to the status quo. It’s also why this eternally popular and profitable genre has been scorned, ridiculed and dismissed.”

Showalter began writing in junior high, but stopped soon after high school because it was getting too difficult. She then moved into the world of science and medicine, dropping out of college three times, “once for microbiology, once for nursing, and once for phlebotomy.” But we already know how the story ends: Writing won her back. She sold her first book at 27, and has been writing professionally for just over 10 years. She loves "creating characters and worlds."

Showalter writes for adults and young adults, but no matter who she's writing for, the genre is unmistakable: It's sweep you off you feet, kiss you softly, paranormal, realistic, fantastical romance. Showalter favors writing in series, like Alien Huntress, her series about sexy alien hunters who seduce their men in between the pages of titles such as Savor Me Slowly; or Lords of the Underworld, a series about men doomed to carry the demons released from Pandora's Box. She likes a catchy trope: Each book in Lords of the Underworld features a different “Keeper,” like Lucien (Keeper of Death) or Paris (Keeper of Promiscuity), an otherworldly twist on the Seven Deadly Sins. In fact, it was the Lords of the Underworld series that gave Showalter her big break. “I felt as if I'd stepped out of Little League and into the majors,” she says.

Showalter is certainly more prolific than literary authors with a similar number of Twitter followers (she's got 28,500), probably due to her writing routine (and/or the voracious appetites of the average romance novel reader). She hits the computer around 8 a.m., where she checks emails and updates her website for about an hour. After that, it's time for some serious word count action. “When writing a rough draft, I like to do a chapter a day, at the very least,” she says. “When doing revisions, I like to do 50 pages. When doing edits, I like to do 100 pages.”

But what happens if those same chapters are met with pretension and dismissal from the literary community? Professors Joanna Gregson and Jen Lois have made a career out of studying this sort of intra-publishing snobbery. “One of the most striking things we've observed is how frequently romance authors experience negative reactions to their work," they write. "There's a stigma attached to the genre, the people who produce it, and the people who read it.”

I was extremely curious to know what Showalter thought of this “stigma,” but she sidestepped my question entirely. When I asked, “Do you ever feel like certain people don't take your writing seriously, or that you can't tell your mother what you do?” she responded with an anecdote about... her mother. “My mother is one of my biggest promoters,” she said. “Soon after my first book released, I was in a car accident, and I called her. She showed up with a box of my books to hand to the firefighters there on the scene.”

Maybe the stigma has passed over her entirely, or maybe she wisely chooses not to dwell on it. The one thing she would admit is that people seem to think they can ask romance novelists whatever they want. “I’ve found it a wee bit odd that questions people normally wouldn’t ask others are suddenly okay to ask me,” she says. “Like how much money I make, as if I’ve simply won the lottery, or if my love scenes are taken from my own life, rather than natural extensions of the characters.”

Maybe it's just as well for a romance novelist to keep her cards close to her chest. After all, it's a profitable genre with incredibly dedicated, excited readers, and if literary purists get stressed out by that, who cares? Romance novelists have been laughing their way to the bank for a long time.

This is the third installment of an interview series in which we explore how writing, editing, and publishing are functioning in the Internet age. Read the first installment, featuring successful self-published author Terri Long. Read the second installment with Michael Archer, the editor-in-chief of Guernica magazine.