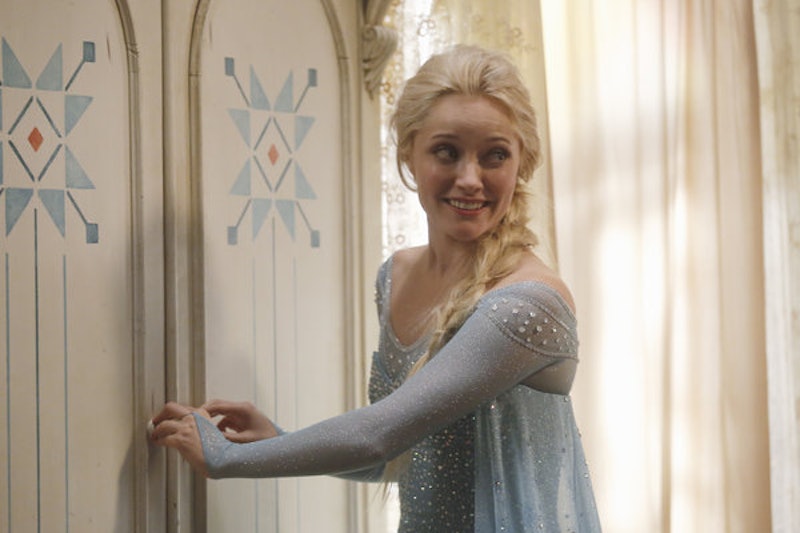 Four-month-old spoiler alert! Frozen is coming to Once Upon A Time Season 4 and if you didn’t already know that, you clearly aren't a very big fan. Spoiler again: Anna and Kristoff are getting married, but that doesn't mean we'll get to see them live in wedded bliss. Since Once Upon A Time isn’t exactly built around drama-less relationships, newcomers Anna and Kristoff will likely be off to a rocky start in Storybrooke. Frozen fans will recall that Kristoff wasn’t always the most trusting when it came to Anna and Elsa’s icy relationship (pun intended). And Once Upon A Time fans might also note that Elsa arrived in Storybrooke via an urn as a seemingly icy villainess. What made her go cold again and why was she locked in an urn in the first place? My guess: Kristoff.

Disney’s Making of Frozen special on ABC revealed that Elsa was originally written as a villain for the film, and it’s possible that this evil Ice Queen is the version of Elsa we could see on OUAT. The season premiere is titled “A Tale of Two Sisters,” and we'll reportedly meet the sisters as they get ready for Anna's wedding. It seems that Anna and Elsa are on good terms prior to the wedding, as a tweet from the OUAT account shows that Elsa even has a surprise for her little sister’s wedding.

But more Season 4 photos would suggest that Kristoff and Elsa aren't too happy to see each other. After all, Anna did choose Elsa over him even though she froze Anna's heart. And head. And unleashed a fiercely irritated snowman on them. Okay, so maybe I wouldn't be her biggest fan either.

Like so many of the weddings we've seen on Once Upon A Time, actually pretty much ALL of the weddings, something about Anna and Kristoff's must have gone horribly wrong to land Elsa in Rumplestiltskin's dungeon. This particular photo, from the impending premiere, shows a potential conflict between Anna's sister and husband-to-be. It's entirely possible that Elsa, while he might not be her first priority, will have unresolved beef with Kristoff upon her arrival in Storybrooke.

Anna will insist that Elsa has good in her and that Kristoff be accepting of her big sister. Instead, Kristoff might take a stance against the Ice Queen that "she will never change," and try to keep Anna at a distance. Sound familiar? This is also a common fight between our other favorite couple, Snow White and Prince Charming. The Season 3 finale hinted once more that David is right about Regina — she's too far gone to change for real. Kristoff has lived a life close enough to ice to understand that there is true evil in its beauty. More likely than not, the disagreement over good vs. evil that has caused oh-so-many issues for the Charmings will also be a common theme for the new couple.

Now, I'm not saying that Elsa isn't on her way to destroy Rumple for locking her up in that urn. Let's face it, she probably is. But I also have to be the buzzkill that says Kristoff and Anna's relationship on Once Upon A Time might not be all sunshine and rainbows. And not just because of all the snow.