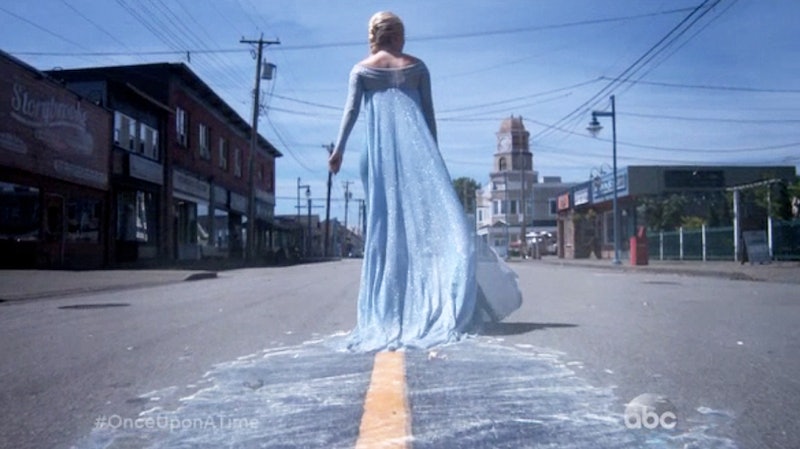 Winter comes early for Storybrooke this September, when Frozen and Once Upon A Time finally, and officially, collide. By far one of the most hyped up story lines on the ABC favorite, Queen Elsa of Arendelle (Georgina Haig) is making her chilly, villainous debut, and has everyone from Captain Hook, Rumpelstiltskin, Snow White, and Charming hitting up L.L. Bean to bulk up on their blizzard-proof outerwear.

The Hollywood Reporter got an exclusive look at a teaser for Once Upon a Time Season 4, and in it Ms. Elsa clearly isn't messing around. She struts through Storybrooke like it ain't no thang, leaving a trail of ice and major bitch-vibes in her wake. Will the treasures and trinkets in Mr. Gold's shop survive a deep freeze? Will Granny's diner have to start serving ice cream only? OH, THE HUMANITY. Although her face never makes an appearance, her pale blue gown and trademark blonde braid are threat enough. Obviously anyone who can pull off that color scheme without looking washed out should absolutely be feared. Regina (a.k.a. The Evil Queen) is noticeably shaken as Elsa passes by, saying, "Here we go again." *shivers with dread and also anticipation at the possibility of incredible scenes between those two*

Of course Emma, played by the coincidentally braid-loving Jennifer Morrison, utters a sarcastic "Really?" in response to Elsa's appearance. To be honest, it's much more shocking to me that Emma still has that god awful red leather jacket in her possession after four seasons than the fact that a fairytale ice queen just appeared out of nowhere, but I digress.

For Frozen fans this new development is pretty major, since beloved characters Anna, Prince Hans, Kristoff and Pabbie the Troll King will all have roles on the show. Lost's Elizabeth Mitchell, also known as 'That Actress On Every ABC Show Ever Created,' will pop up at some point as an as-of-yet undisclosed Frozen character, which only adds to the intrigue of the new season Once Upon A Time is about to serve up. Tune in on Sunday, September 28, to see if Elsa really is the devious villain she's been made out to be, or if she's actually just visiting to nominate everyone in Storybrooke for the Ice Bucket Challenge.