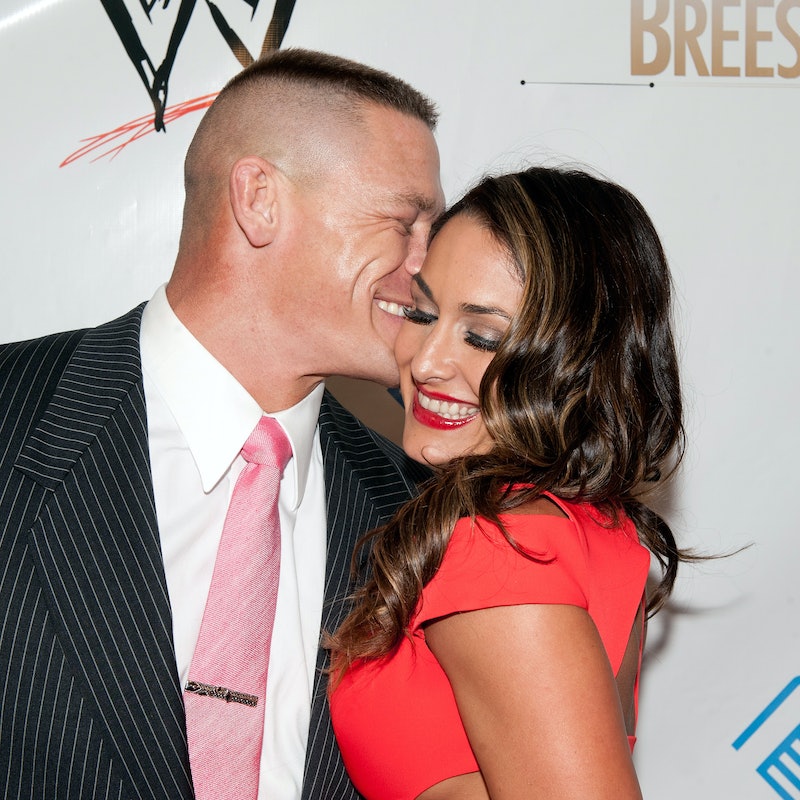 Keeping Up With The Kardashians may have beat out Total Divas at the Teen Choice Awards for Choice TV: Reality Show but trust me when I say things are about to get real in the WWE realm. All you fans of Nikki Bella and John Cena's relationship may want to brace yourselves for what I'm about to say. At first I thought, there's no way these two are going to get married. To be honest, after a couple of seasons and the most recent trailer for Season 3, it wasn't looking good for this WWE couple. In the Total Divas Season 3 trailer we see a tense conversation between Nikki and John about the fact that John doesn't want to get married or have children. Nikki then freezes her eggs in case things don't work out the way she'd like them to with John. I'll admit, I was biting my fingernails throughout the entire ordeal.

But it seems that the two have survived it all, and according to a recent interview with the Daily Star, Nikki and John are stronger than ever. These two have had a... rocky relationship. First it started with Nikki hiding the fact that she had been previously married before her relationship with John. I'll give you that one, John, because I was pretty shocked to hear this myself. Instead of flying off the handle or doing something drastic like ending their relationship, he simply asked Nikki to be included in her life and said he wanted to hear about her life from her, not anyone else. He also did a really epic impression of a totem pole, but that's besides the point.

So with this past them, you think everything would be peachy keen? Fuhgeddaboutit! Turns out John was hiding a few skeletons in his closet too. He couldn't really get mad at Nikki over her hiding her previous relationship because he was hiding the fact that he was seeing another woman too!

But twist! Turns out the other woman was an escrow agent, and John wanted to buy the condo Nikki was trying to sell (being that she's a real estate agent on the side and all). Yeah, yeah, yeah, it's romantic, I get it. But what's going on with them right now!?

They've moved in together and apparently they're incredibly happy!

Nikki revealed to the Daily Star that the stoic image John has in the ring is all a persona for WWE, and that he's actually a "real softie," as she put it. "I am truly the luckiest girl in the world," she said. "I've found my soul mate. He's so romantic that we've even reinacted The Notebook." Reinacted The Notebook? That's kind of sappy, but now I'm looking forward to a WWE Smackdown with a Notebook theme! A girl can dream, right?

All of the issues that the couple previously had seem to have melted away because she also insinuated that there may be some Total Divas wedding bells. "Well, if my prayers come true, then yes," she said, when asked if there could be a wedding coming.

Despite everything that's happened, it looks like these two have come out on top. I never admit that I'm wrong, and I mean never, but I have to say that I was wrong about these two. I wish them nothing but the best!