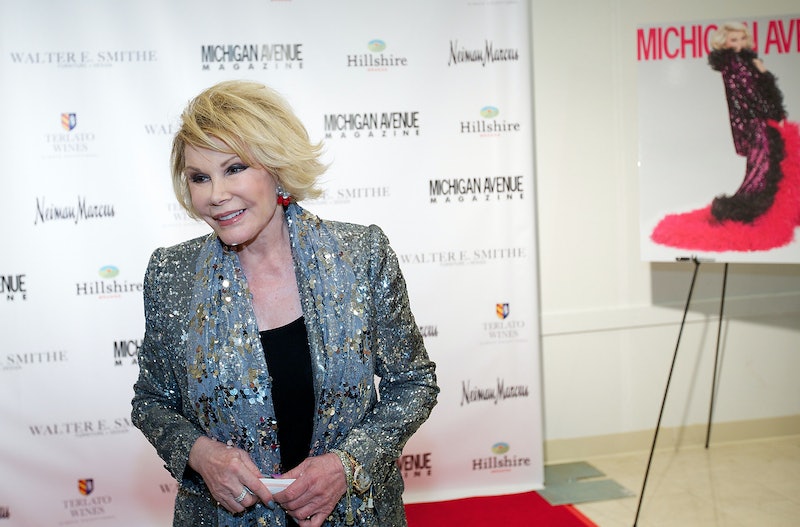 Although the world had high hopes of Joan Rivers recovering from the medical emergency that was a side effect of a clinical procedure she was receiving on her throat, tragedy still struck Thursday afternoon. Her daughter, Melissa Rivers, released a statement that Joan Rivers had passed away at age 81 and the world is still reeling from the loss of such a famous, outspoken comedienne. According to ABC News, Rivers' funeral will take place in Manhattan on Sunday and we should all be sending well-wishes to her family.

"It is a terribly sad day for all of us," said Rabbi Joshua M. Davidson of Temple Emanu-El, where the funeral is set to take place. "We mourn with her family, friends and all those millions to whom she brought laughter and joy." There's no word yet on whether this will be a private funeral only attended by Rivers' family and close friends or more of an open memorial to which many celebrities can travel to pay their respects, but it's clear that the ceremony will be held with the utmost respect to Rivers and to the family that she left behind.

However, as despondent as we are about the loss of another icon, there have been some negative effects of Rivers' death that go beyond the cloud of morning. The clinic where Rivers was receiving her throat procedure has, according to TMZ, been receiving death threats from furious fans who blame the workers there for Rivers' death. While the Department of Health is investigating the surgery, there's a difference between an official inquest and threatening the safety and lives of the clinic workers, who have reportedly been sent home early only to return to work to find extra security being added to the clinic to keep them safe.

At this point, we don't know exactly what happened during Rivers' throat procedure or what could have gone so horribly wrong as to cause her to stop breathing and have to be rushed to Mount Sinai hospital where she would eventually pass away. However, during this time it's better that we focus our energies on supporting her family and honoring her memory than on sending death threats and casting blame. Wishing death on someone else is one way to deal with the loss of a celebrity icon, but it's not the healthiest way. Rivers brought us laughter and joy, so lets put some of that positive energy back into the world.