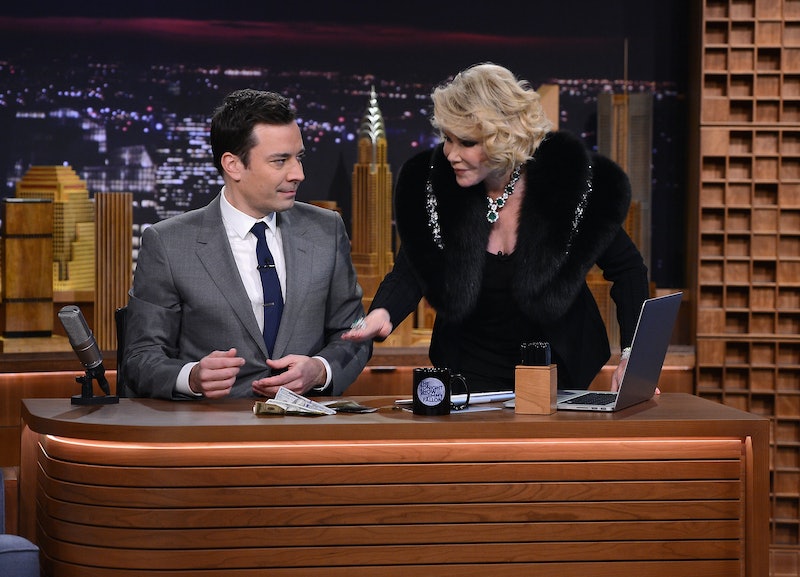 Considering Joan Rivers' infamous history with late night talk shows, it's no surprise that she inspired a wealth of tributes from the current hosts Thursday night. In case you somehow haven't heard, Rivers passed away on Thursday, leaving behind devastated family, friends, and fans of her blunt, in-your-face humor. In honor of her, The Late Show, The Tonight Show, Jimmy Kimmel Live!, Conan, and The Late Late Show all devoted airtime to speaking about Rivers and her legacy. The emotional tributes Rivers received from the late night talk shows will literally bring tears to your eyes, as it did to some of the hosts.

Some people, like David Letterman, told stories about interacting with Rivers in the past. Some people, like Chris Hardwick on Conan, were barely holding it together emotionally as they reflected on knowing Rivers. Everyone, however, was respectful and touching in their words, making us all feel very deeply that you might have loved Rivers or you might have hated Rivers but you can't deny that she had an indomitable personality that the world is truly a little darker without.

Craig Ferguson and Jon Stewart set aside a segment for Rivers as well, but here are some of the best late night tributes to her. More videos will be added as they become available.

Letterman's tribute to Rivers was a five-minute collection of anecdotes about Rivers' career, character, personality, and sense of humor. His stories added a personal touch to what could have otherwise just been a laundry list of Rivers' accomplishments, making the audience laugh even through the sharp sting of nostalgia.

"Talk about guts," said Letterman in his reflection. "She would come out here and sit in this chair and say some things that were unbelievable. You would have to swallow pretty hard and twice, but it was hilarious. And she stood behind her jokes and to my knowledge would say these things and not apologize because she would always feel like, 'Hey, I'm a comedian. These are jokes.'"

Jimmy Kimmel showed a clip from the last time Rivers visited his show in the past year and Rivers was at her comedic finest. In the clip, Kimmel couldn't stop laughing as Rivers joked that what she wanted her grandson to be when he grew up was, "gay... [because] who else is going to give a damn that I knew Judy Garland?"

Leave it to Kimmel to make us laugh with his tribute. After all, according to Melissa Rivers, "[Joan Rivers'] greatest joy in life was to make people laugh."

"I have not sat next to anyone who told more jokes faster than Joan Rivers," said Meyers, who gave special attention to Rivers as a writer. Most of the tributes focused on her comedy or her many television products, so for Meyers to take the time to give attention to Rivers' numerous books and the trademark humor she interjected therein was very touching.

Conan O'Brien had Chris Hardwick visiting as a guest and Hardwick, apparently, had a "personal connection" with Rivers. He told the audience about his developing friendship with Rivers: "I would get a call from her every once in a while... 'It's Joan. I want to know about the Internet.' She wanted to know about the Internet, which is one of the reasons why I think she was so relevant for six decades. She wanted to know how everything works... I adored her and she was lovely."

Particularly notable is the part where Hardwick notes that Rivers hated the word legend because "it makes her sound old," but we all have to acknowledge if not before then at least now that Rivers was nothing if not a legend.