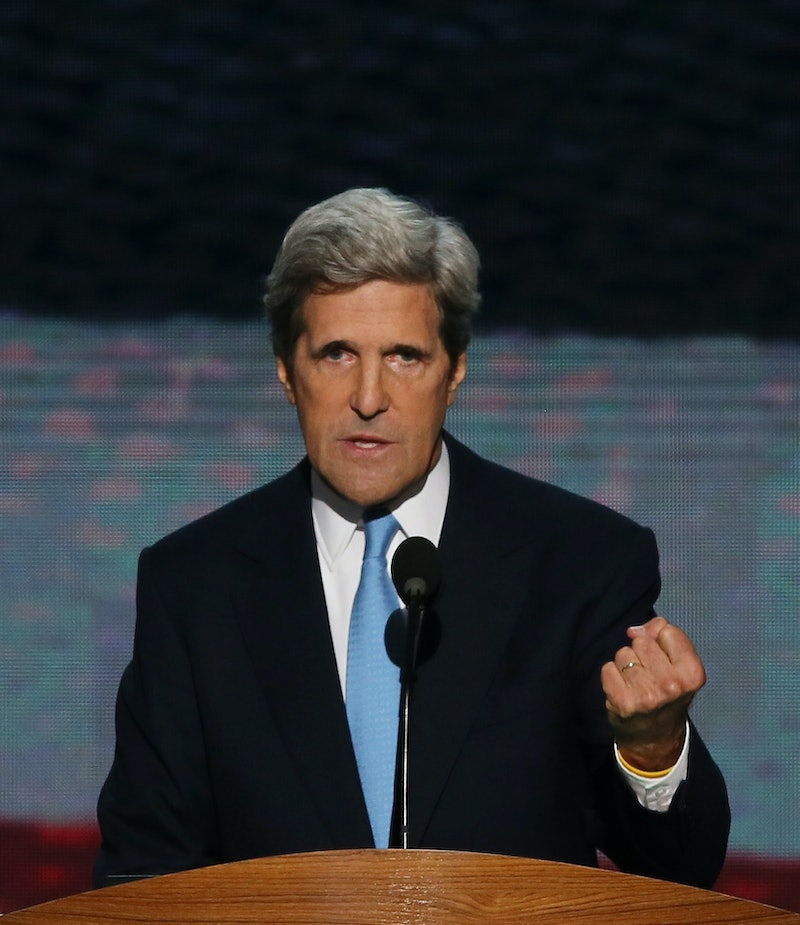 After the execution of two American journalists, the U.S. and its allies are getting increasingly aggressive towards Islamic militant group ISIS. At a NATO summit in Newport, Wales, Secretary of State John Kerry called for an anti-ISIS coalition, making the clear distinction that the intent was not to contain the jihadist group, but to destroy them. Diplomats and defense officials from some of NATO's most powerful allies, including President Obama and British Prime Minister David Cameron, developed a two-pronged strategy in combating ISIS in Iraq and Syria, with one crucial caveat.

The NATO talks come after Kerry penned an op-ed in the New York Times last week that conveyed the importance of such a coalition. In the article, he called ISIS a "cancer" and warned that their violence will likely spread beyond Syria and Iraq. Convening with other NATO member states on Friday, Kerry echoed that message in a joint statement with Defense Secretary Chuck Hagel, which called for "a unified approach at the international, regional, and local level" and "combining military, law enforcement, intelligence, economic, and diplomatic" tactics.

More specifically, the main points outlined in the statement include:

Kerry's impassioned statements at the summit signaled a clear end to the moderate and cautious approach the U.S. has adopted thus far.

There is no containment policy for ISIL. They’re an ambitious, avowed, genocidal, territorial-grabbing, caliphate-desiring quasi state with an irregular army, and leaving them in some capacity intact anywhere would leave a cancer in place that will ultimately come back to haunt us.

The general basis of the coalition's plan is a two-pronged attack: reinforce allied troops on the ground in Iraq and Syria while launching airstrikes similar to those that have been sanctioned in Iraq. Here are the details.

The coalition will pour its efforts and funding into strengthening combat troops on the ground, which will consist exclusively of Iraqi military forces and Kurdish peshmerga fighters in Iraq and moderate, anti-Assad Syrian rebels in Syria.

However, one stipulation that was a "red line" for every allied member in attendance was that they would not send in their own troops to Iraq and Syria. Or, as Kerry put it, "no boots on the ground."

As for expanding air strikes into Syria, the only wild card in the plan is President Bashar al-Assad. Cameron commented on the autocrat, calling him "part of the problem, not part of the solution." To sanction legal air strikes in Syria would not require Assad's cooperation since he has committed war crimes and was therefore "illegitimate."

This week saw concrete results from the U.S. air strikes in Iraq: Three senior members of ISIS were killed in Mosul, including an aid to the group's leader, Abu Bakr al-Baghdadi.

Who Would Be Involved?

Besides the 10 NATO members that were present at the summit — the U.S., Britain, France, Germany, Italy, Canada, Turkey, Denmark, Poland, and Australia — the U.S. is hoping to enlist the help of Jordan for intelligence and Saudi Arabia for financing, according to the New York Times.

And the United Arab Emirates has also expressed its commitment to helping in the fight against ISIS. The UAE ambassador to the U.S. stated this week:

The UAE is ready to join the international community in an urgent, coordinated and sustained effort to confront a threat that will, if unchecked, have global ramifications for decades to come.