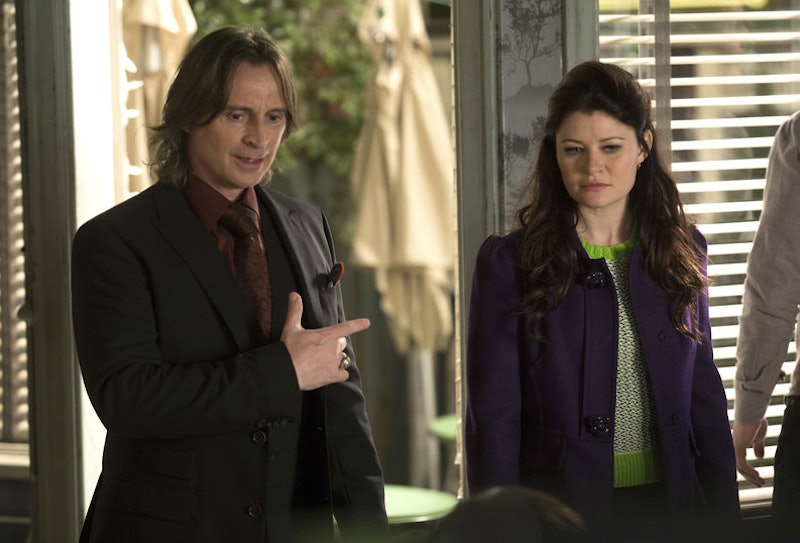 There's no denying that the most exciting thing about season four of Once Upon a Time is that Anna, Elsa, Kristoff, Hans, and Sven from Frozen will be joining OUAT — at least for the first half. However, all the spoilers and hints that have been dropped about the upcoming season are exciting in and of themselves. For example, reoccuring villain Maleficent will be in the second half of season four and Frances O'Connor has been cast as Belle's mother. The latter thing is officially more exciting to me than the former because it has literally been four seasons of Once Upon a Time and Belle has yet to get a plot line of her own.

According to Entertainment Weekly, O'Connor will "portray Colette, whom we’ll meet briefly in the sixth episode, but find out she had an immense impact on Belle’s life. There’s a possibility to see her again later in the season." And let me just be the first to say thank god. As much as I enjoy the dynamic of Belle and her now-husband Rumpelstiltskin, her relationship with Rumpel kind of overshadows everything else about her. From the moment she was introduced to the last episode of season three, Belle's storyline has been so wrapped up in Rumpelstiltskin that she basically has no identity of her own around him. Let's look back at Belle's history on Once Upon a Time.

Belle was introduced in the season one episode "Skin Deep", in which we saw Once Upon a Time's take on Beauty and the Beast. Rumpel saved her kingdom from ogres and in return Belle offered herself as his personal slave to protect them from him when he came to collect. We got to see their disdain for each other turn into love until Regina got into Belle's head and, worse, into Rumpelstiltskin's and he threw Belle out. We later discover that Regina kidnapped Belle and imprisoned her and that, in the present day, she's amnesiac and still imprisoned in case Regina ever needs that ace in the hole. In the present day, Rumpel also thinks she's dead.

Even when Belle is freed, she's freed by Jefferson, the Mad Hatter, who sends her back to Rumpelstiltskin with the message that Regina locked her up, because Jefferson wants Rumpel to kill Regina for him. Her role as The Dark One's girlfriend makes her a target to just about everyone and even on the show her storylines are defined in terms of that. Are she and Rumpel on good terms or not on good terms? Can she keep Rumpel on the side of good? Even when she loses her memories (again) and Rumpel calls her to tell her who she was, everything he tells her is who she was in relation to him:

I know that you're confused about who you are, so I'm going to tell you. You are a hero, who helped your people. You're a beautiful woman, who loved an ugly man. Really, really loved me. You find goodness in others and when it's not there you create it. You make me want to go back, back to the best version of me. And that's never happened before. So when you look in the mirror and you don't know who you are, that's who you are. Thank you.

Super romantic, right? But I thought that speech was about to be about Belle.

I'm not saying that Belle doesn't have a personality, because she does. I'm just saying that we've seen more of Rumpelstiltskin's backstory and motivations than we have of Belle's. Every storyline or episode that Belle gets to herself references Rumpel in some way, whether it's a flashback to an adventure she had when she tries to stop moping over Rumpel and go out and be a hero or her getting false memories that turn her into Lacey with a focus on how Rumpel has to make her fall in love with him all over again.

Now that she's officially Mrs. Gold, hopefully we'll get a lot more episodes in season four that focus on how amazing Belle is. She's so smart that she was able to figure out Zelena's whole plan by herself; how is a girl like that not fleshed out more? As far as I'm concerned, Belle don't need no man to define her, thank you very much.