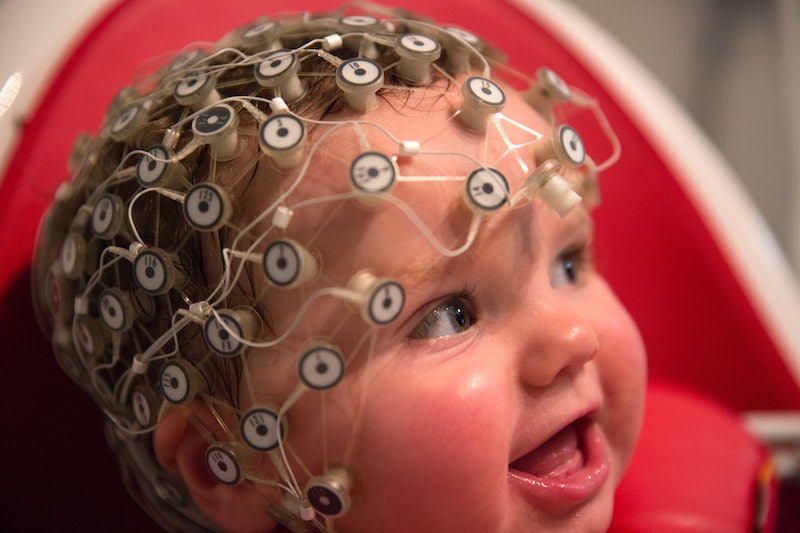 We are in the future. I repeat: we are in the future. In a groundbreaking, heebie-jeebie-inducing experiment, scientists were able to transmit messages directly from brain to brain between people 5,000 apart, a process satisfyingly called "hyperinteraction". With no invasive surgery, no talking and no writing, a person in India said hi — well, actually, "hola" — to a person in France. Ladies, gentlemen, there is no question: telepathy is here.

Five years ago, a special cap was created that allowed people to Tweet telepathically. At the time, it was a huge, game-changing scientific breakthrough. But it has nothing on this new research, conducted by scientists from France, Spain and Harvard University's Medical School. According to the report in Plos One, these guys managed to "directly and noninvasively transmit a thought from one person to another, without them having to speak or write." And they did this across a huge distance, "a critically important proof-of-principle for the development of brain-to-brain communications."

Of course, yes, we're all excited about what they did — but the real question is: how? With a lot of machinery, and the help of the internet, it turns out. Specifically, the way it works is this: everyone gets hooked up to an EEG cap that scans brain activity. Then, the message-sender is told to "spell" the words — in the case, "hola" and "ciao" — in binary (you know, 1s and 0s), using their hands and feet. So they'd move a hand for a one, and a foot for a zero.

Thanks to the EEG, this movement creates electronic signals that are then sent, via the internet, to the message-receiver, on the other side of the planet. This receiver is wearing a cool device called a “transcranial magnetic stimulation machine,” which translates the electronic signal into flashes of light that correspond to the ones and zeros. So a person sitting in France is able to make out the binary code for "hola" by counting the peripheral flashes of light sent to him via brainwaves alone from a dude in India.

As the study's co- author, Alvaro Pascual-Leone, a professor of neurology at Harvard Medical School, told the Independent:

We wanted to find out if one could communicate directly between two people by reading out the brain activity from one person and injecting brain activity into the second person. One such pathway is, of course, the internet, so our question became, 'Could we develop an experiment that would bypass the talking or typing part of Internet and establish direct brain-to-brain communication between subjects located far away from each other in India and France?'

According to Quartz, the research was in part funded by the European Commission’s Future and Emerging Technology program, kind of like the Pentagon's DARPA, which has brought us all of the awesome robots we like to ogle on YouTube. Beyond realizing our greatest sci-fi fantasies, the experiment has huge implications: not only could it eventually transform the lives of those with limited communication abilities (for example, stroke patients), it could change the whole nature of our social interactions. Imagine a world where hacking involves reading your brainwaves, instead of your texts.

“It is kind of technological realisation of the dream of telepathy, but it is definitely not magical," Giulio Ruffini, theoretical physicist and study co-author, told AFP.

Well, maybe. But it certainly feels magical to me. Images: Getty Images (3)