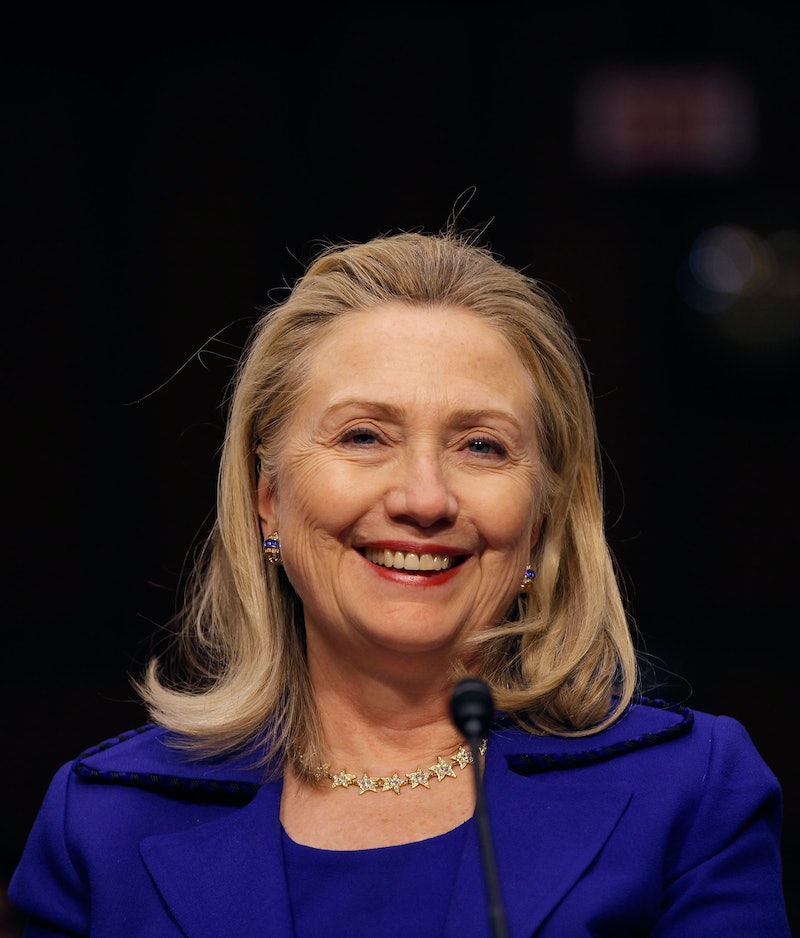 Everywhere Hillary Clinton goes, it's the thing on everybody's mind: you gonna run? When? Are you going to tell us now? How about now? Please Hillary, announce your candidacy at this afternoon's Barnes and Noble event, please! Well, for as long as those plaintive cries have gone unanswered, it looks like we're creeping closer and closer to hearing her choice: Hillary said she'll decide whether to run for president "probably after the first" of next year, according to Reuters. She was reportedly speaking at a charity event in Mexico City, hosted by telecom billionaire (and world's richest man) Carlos Slim.

However dull presidential most announcements are, the reasons a Hillary announcement would make waves are obvious. They're also deserved. Beyond her considerable experience on the world stage as President Obama's Secretary of State throughout his first term, she remains the strongest-ever contender to shatter the gender barrier in the White House.

Regardless of differing politics, a woman winning the highest office in the land would be the kind of moment in American history — like President Obama's election in 2008 — which would rightly be held up as an inspiration. And it's a huge part of the reason people are waiting on her decision with bated breath.

If she does follow through with this schedule, it wouldn't be surprising, based on recent history. As NBC News observes, her 2008 campaign was initially launched in earnest in late January, 2007, when she announced an exploratory committee. And as long as we've been waiting for her to decide, the wait has been pretty fair. Running for president is a staggering commitment, both physically and mentally, and announcing in January would commit Hillary to at least a dozen months of life in the spotlight — and many more, if things went well.

Basically, as much as some commentators may cynically assume her plans are pre-determined, you can hardly fault someone for taking their time. Especially given the unique brand of sexism she's faced in previous campaigns, and would likely face again, she's earned a measure of caution in deciding to jump back into politics.

If she does decide to enter the race, she could be one of the first contenders in her party to do so. There aren't any other major Democrats signed on for 2016 just yet, though some are considered likely candidates, Vice President Joe Biden and Maryland Governor Martin O'Malley among them. Which just goes to show the huge shadow Hillary's decision is casting over the coming campaign season — even though nobody's racing to announce ahead of her, we're all still impatient, because we could be waiting on history.

Hillary's had a busy couple days — before appearing in Mexico Friday, she was in Las Vegas Thursday speaking at the National Clean Energy Summit. And, for what it's worth, she sounded in campaigning form, blasting climate change deniers and calling for the U.S. to become a "clean energy superpower."