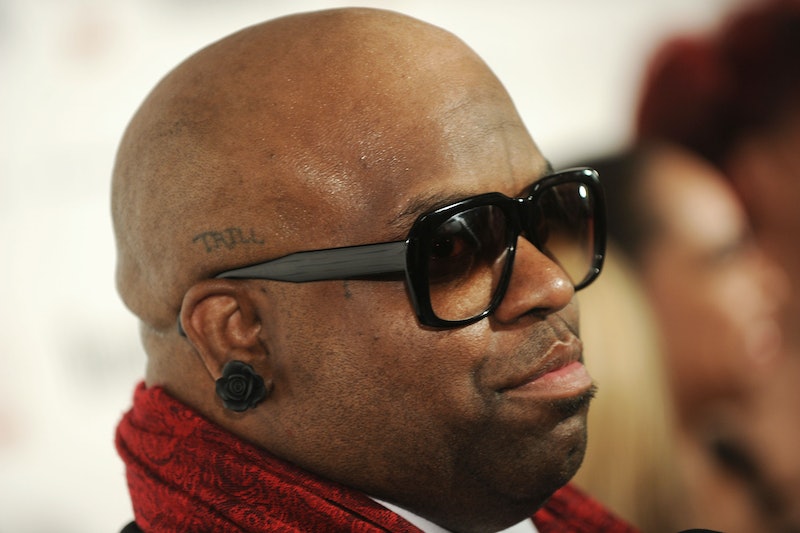 Looks like CeeLo Green is still losing lucrative business deals following the offensive comments he tweeted about rape (in which he said, and I quote, "If someone is passed out, they’re not even WITH you consciously. So WITH implies consent" and "People who have really been raped REMEMBER!!!"...seriously) earlier this week, which I can't deny I'm pretty happy to hear. Green deserves to be taught that his comments were completely detrimental to the fight to diminish a rape culture that still clearly exists — and that they were just indicative of the sad fact that rape culture in this world is alive and well. Three days after his reality show, The Good Life , was cancelled following the comments, CeeLo Green has reportedly been dropped from the Freedom LIVE music festival on account of festival organizers, Naval District Washington, not wanting to be associated with a sexist rape apologist. Basically.

As Naval District Washington said in a statement about the decision to drop Green, posted on their Facebook:

Unfortunately, one of the performers we signed for the JBAB Freedom Live show on 20 September recently posted comments on social media that we consider to completely inconsistent with Navy core values. Regardless of intent or context, the lack of sensitivity towards an issue that is one of the great challenges facing our Navy is unacceptable.

As a result, we have made the decision to pull CeeLo Green from the Freedom Live event on 20 September. Little Big Town, the main attraction for the event, will still perform as scheduled. We will announce as soon as possible a replacement opening act of the high quality that you expect and deserve.

Hopefully, Green has learned from his idiotic blunder, but I'm sad to say that doesn't seem to be the case — apparently, he sent a complaint to the Sexual Assault Prevention and Response Office at the Department of Defense in protest of his removal from the festival, which kind of makes me think he doesn't understand anything he's supposedly apologized for. Ugh.