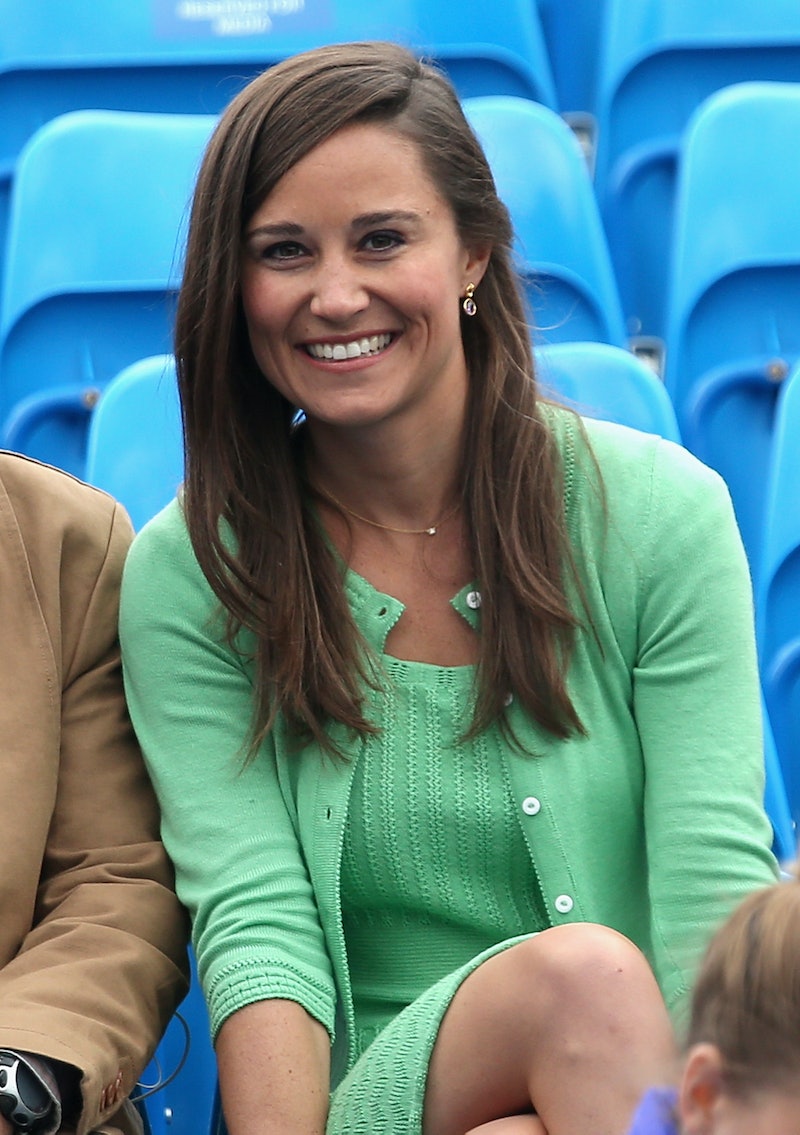 It's time to celebrate, because it's Pippa Middleton's 31st birthday. The almost-Royal darling and sister of the Duchess of Cambridge Kate Middleton rose to public attention during the 2011 Royal Wedding for how toned her derrière looked in her bridesmaid dress. But Pippa is so much more than her behind. In fact, the youngest Middleton has made quite a name for herself in Britain's journalism world. She started out writing for The Party Times, the online magazine that promoted her parents' event planning company Party Pieces. Then she moved up to a column for The Daily Telegraph where she wrote about food and social events. She's also wrote a book called Celebrate which included party planning tips for every kind of occasion throughout the year.

It's safe to say Pippa is a bit of an expert on parties, so it's likely her birthday will be its own splendid affair. But what kind of party is fit for the sister of a Royal? Looking at tips from her very own writing, I've analyzed the type of birthday event Pippa would most like to have. It's kind of like getting a peek at the actual event when you imagine it all coming together like this:

There would definitely be a breakfast surprise. In her book Celebrate, Pippa called out the morning meal as one of her favorites saying, "I like breakfast. A good morning meal brightens any day.” And what a better way to brighten your birthday than with a fun morning snack? Oh and please note that according to Pippa, "nearly any breakfast becomes special when it's brought to you in bed."

As for what her birthday meals would consist of, we can rely on her Telegraph and Vanity Fair columns for some likely choices. Here are some meals she's written at length about that she might want to enjoy on her special day:

With a little nephew in tow, Pippa would likely take this bit of advice from her book: "Games are not only fun but are also useful for keeping children at the table.” So what kind of games are fit for a party? Well, she couldn't play Monopoly if Kate and Prince William were there as it was banned in the Royal family because in the past things had gotten overly competitive, and in Prince Andrew's words, "too vicious."

Fortunately there are some alternatives. In her book she suggests, “Switch[ing] off the television to play cards or a board game for two. Backgammon is a personal favorite, but I always forget how to set up pieces on a board, so use the photograph [of a set board included in Celebrate] to avoid any potential disagreements.”

That Pippa, always thinking ahead.

The special occasion denotes a special drink. According to Celebrate, in this case it's likely Pippa would prefer "some bubbly for midnight toasts."

Something with a fabulous hat. And/or she could just wear the white bridesmaid gown again. Why not?

Look, her magazine The Party Times doesn't have authors attributed to their posts and their "About Me" just has a picture of Pippa's face so I'm going to assume she writes all the pieces. This is important as the most recent article advises on how to create a One Direction themed party, which I am also going to assume she used as inspiration for her own fête. Ideas for that theme are the following:

Party games could include a One Direction quiz to see how well these fans know their band trivia, played for prizes such as 1D stickers and stationery. Follow this up with an airing of the One Direction movie, accompanied by popcorn and snacks. This theme works brilliantly for a sleepover party. For going-home time, fill 1D goodie bags with treats and send them all off to dream of their teen idols.

Other theme ideas come from the "Grown Up Parties" tab on the website which boasts a wild west theme and a shipwrecked theme. I clearly need to get myself to some grwon up British parties ASAP because they sound awesome.

Will Pippa follow her own party planning advice when celebrating her birthday today? I sure hope so, because a champagne-infused breakfast-in-bed with boardgames and a side of One Direction sounds like a blast. Oh, and dancing. Her party definitely should include dancing.