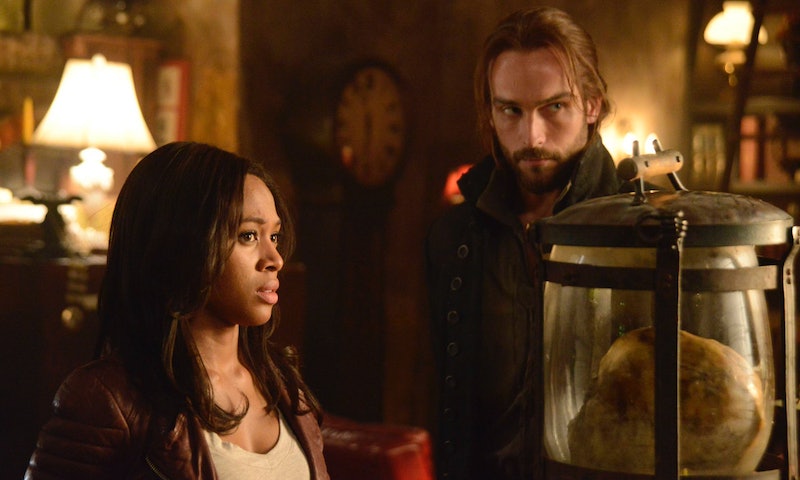 Finally, we're in the home stretch. It's been a very long winter, spring, and summer since Sleepy Hollow left our lives back in January of this year. The actual date was January 20, and if you really want to get technical, I could have had a baby in the amount of time it's taken for to return to television. But fear not, September 22 is almost here, and the Sleepy Hollow Season 2 spoilers are just as insane as last season's finale. Considering just how last season ended, what could possibly happen next? The long and the short of it is that everyone's in some sort of peril, and Abbie is still most definitely stuck in purgatory, and Ichabod now has to deal with the fact that his long-lost son is trying to destroy everything, and that's barely half of what happened in the Sleepy Hollow Season 1 finale.

Obviously Abbie's going to make it out of that doll house... eventually. Executive producer Len Wiesman said that there are "18 episodes in Season 2, that's a lot of time to get Abbie out." This isn't too reassuring, but at least we know she does make it out. Eventually. Abbie will break free of her haunting, neon doll house, and when she does, there might be a new surprise waiting for her in Sleepy Hollow.

Entertainment Weekly first reported that Mentalist actress Aunjanue Ellis is cast as Abbie's mother Lori Mills, who is supposed to be dearly departed. We know that the two girls had a pretty grim up bringing, with their father leaving them, and then their mother being admitted to a mental hospital shortly thereafter. At one point during Season 1, Abbie told Ichabod that their mother passed some time after being admitted, and that should be the beginning and end of the story. However, with this casting news, there are two possible scenarios: dear old mom is really dead, and we'll see her in flashbacks, or mommy dearest is in fact alive — in some form or another.

A flashback episode would be a nice capstone on Abbie and Jenny's relationship, which has certainly had its ups and downs over the years. Introducing their earliest childhood memories, with mom included, might explain a little bit more as to why their father left, and why their mother was sent away. It would stand to reason that we might even get some clarity by seeing the events leading up to the elder Mills' death.

However, knowing Sleepy Hollow, I'm willing to wager that Lori is secretly alive, and that she has been all these years. Isn't it possible that she was institutionalized not because she was crazy, but she, like her daughters, had also seen demonic things in her time? It certainly seems to run in the family. And — just hear me out — this supernatural connection could mean that Lori is "alive," but not in our world, which could also mean that she's stuck in the same purgatory as Abbie.

Abbie is trapped in a doll house from her childhood with her younger self, and that's pretty insane right there. And if Lori is trapped in that same purgatory with the young daughter she lost so long ago, things could get really interesting. We know Abbie's going to be stuck there for a little while, and if she's there for a while, it'd be pretty boring to leave her there alone. It sounds insane, but having her mom is in the dollhouse with her and then the two of them work to escape purgatory together would be a great way to make purgatory a little less stagnant.

On top of all of this mother speculation, there's a new sheriff in Sleepy Hollow according to TVLine, and it's already been hinted that she'll have ties to Abbie and Jenny. It's not too much of a stretch to speculate that this sheriff could have ties to the Mills' mom, too. As of now, there's no definitive information about which episode will feature Lori's debut, and we don't even know how long she'll stick around. Either way, this season will have a fun time juggling father & son issues alongside mother & daughter ones. And I'll continue the tradition of cocking my head to the side like a perplexed puppy the whole way through.