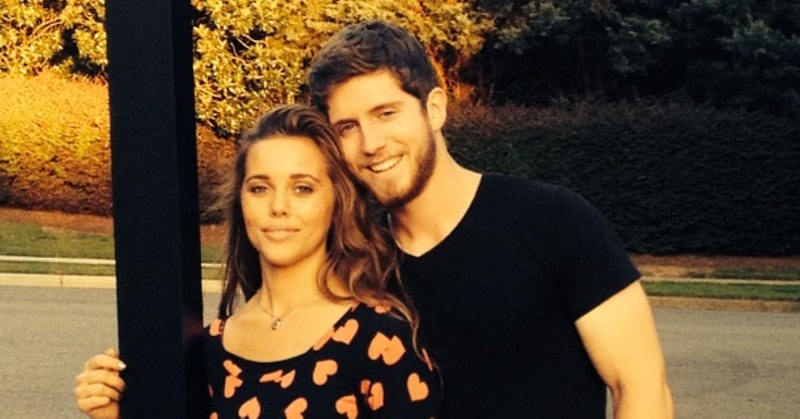 Soon after Jill Duggar's marriage to missionary and account Derick Dillard, another family member began her wedding preparations. 21-year-old Jessa Duggar is engaged to Ben Seewald and the wedding will be held on Nov. 1. We will undoubtedly see Ben and Jessa’s wedding on TLC’s 19 Kids and Counting, but at this point there have been so many weddings and babies, I am not sure I really care — except for the first kiss moment. Now that Jim Bob has officially allowed Seewald to move into the guest house on the family's property, according to People, chaperones will have to be present 24/7 so they aren’t tempted to get too close before the big day (although, wouldn’t that make for the best scandal ever?).

First of all, before we talk about what exactly Ben Seewald does with his time, I just learned some of the rules of courting from that People article and am completely shocked. "Jessa and Ben have set up their own courtship standards. They did not hold hands until they got engaged. After they got engaged, they started holding hands," Jim Bob said. Could you imagine not holding hands with someone before you were engaged to marry them? However, they are allowed a side hug lasting no more than 30 seconds, because obviously if it lasts longer they will have sex right there. So tempting.

19-year-old Ben will be a part of the Duggar family soon, so here's what you should know about him and how he spends his time — fair warning: he's not as harmless as he first appears.

He is a college student

According to People, Ben is currently enrolled in online classes and will continue to take them while he lives and works with the Duggars. Beyond that, he really isn’t doing much else. But since there's a chance that Jessa will follow in Jill's footsteps and get pregnant ASAP, Ben might want to start looking for a full-time gig. Just a thought.

Jim Bob told People: "Ben was living four hours away in Hot Springs (Arkansas) with his parents. After Michelle and I were talking about it, we have so many projects to do that we need help for – everything from construction projects to keeping the grass mowed to putting roof on a building, paperwork and things like that – and we asked him if he would be interested in moving up here so that Jessa and his relationship could be really accelerated. He was all for it and his parents were happy about it." So, he’s basically the Duggars' handyman?

He is extremely religious & A Proponent of Harmful Messages

In fact, he might just have a deeply upsetting future in hating on people who refuse his beliefs, because he is definitely not shy when it comes to his opinion. On Sept. 1 he compared abortion to the Holocaust on his Facebook page, so that should give you a pretty good idea of what we're dealing with. Part of the post reads: “We will stand for the defenseless. We will protect the persecuted. We will feed the hungry. We must end slavery! We must end the abortion holocaust! We are the future, and we will not be stopped." Um, yikes. That puts Ben in a completely new, scary light.

Let's hope that if 19 Kids and Counting has to give Ben any airtime, it focuses on his relationship with Jessa and scholarly pursuits, instead of giving him a platform to spread his extreme, disturbing beliefs.