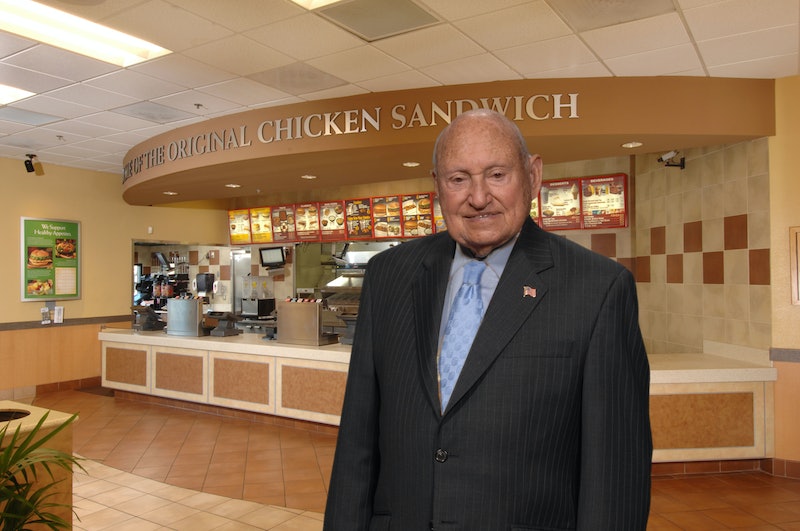 Southern billionaire and Chick-Fil-A founder S. Truett Cathy died on Monday at his home in Georgia. He was 93. The restaurant owner-turned-franchise extraordinaire, who famously runs his business with Christian principles, found himself in the national spotlight in recent years over the company's views on same-sex marriage — views that eventually changed.

Born March 14, 1921, in Eatonton, Georgia, Cathy was a child of the Great Depression. He grew up poor in the Atlanta area, struggling through high school and unable to attend college. However, he didn't let that stop him from following his dream. He told The Atlanta Journal-Constitution in 2008:

I had a low image of myself because I was brought up in the deep Depression. ... But it made me realize you can do anything if you want to bad enough.

After World War II, in which he served in the U.S. Army, Cathy opened his first restaurant in an Atlanta suburb — a chicken grill called The Dwarf Grill — with help from his brother, Ben. Over the next few decades, Cathy expanded his restaurant to the chicken empire it is today. In 1961, he created the Chick-Fil-A brand, opening the first fast-food chicken joint in 1967. Now, Chick-Fil-A boasts more than 1,800 restaurants in 40 states and Washington, D.C.

A devout Southern Baptist, Truett ran Chick-Fil-A guided by his Christian principles. This meant the privately held franchise was always closed on Sundays, so employees could have time with their families or attend worship services.

Truett described his principles as follows:

I'd like to be remembered as one who kept my priorities in the right order. We live in a changing world, but we need to be reminded that the important things have not changed. I have always encouraged my restaurant operators and team members to give back to the local community. We should be about more than just selling chicken; we should be a part of our customers' lives and the communities in which we serve.

However, Cathy's principles also led him into the national eye when his son and current Chick-Fil-A CEO, Dan Cathy, took a public stance against same-sex marriage. Dan Cathy's comments on gay marriage sparked nationwide boycotts and protests of the chicken franchise.

Chick-Fil-A, though maintaining its Christian principles, has since changed its tune. Dan Cathy told USA Today earlier this year: "I'm going to leave it to politicians and others to discuss social issues."

Despite the company's anti-gay remarks, Chick-Fil-A has been performing incredibly well, taking in $5 billion in revenue in 2013 and becoming one of the most popular fast-food chains in America. Consumer Reports even named the franchise the "Top Fast Food Chicken Chain" in 2014.

S. Truett Cathy is survived by his wife, Jeannette McNeil Cathy; his two sons and one daughter; and 19 grandchildren and 18 great-grandchildren.