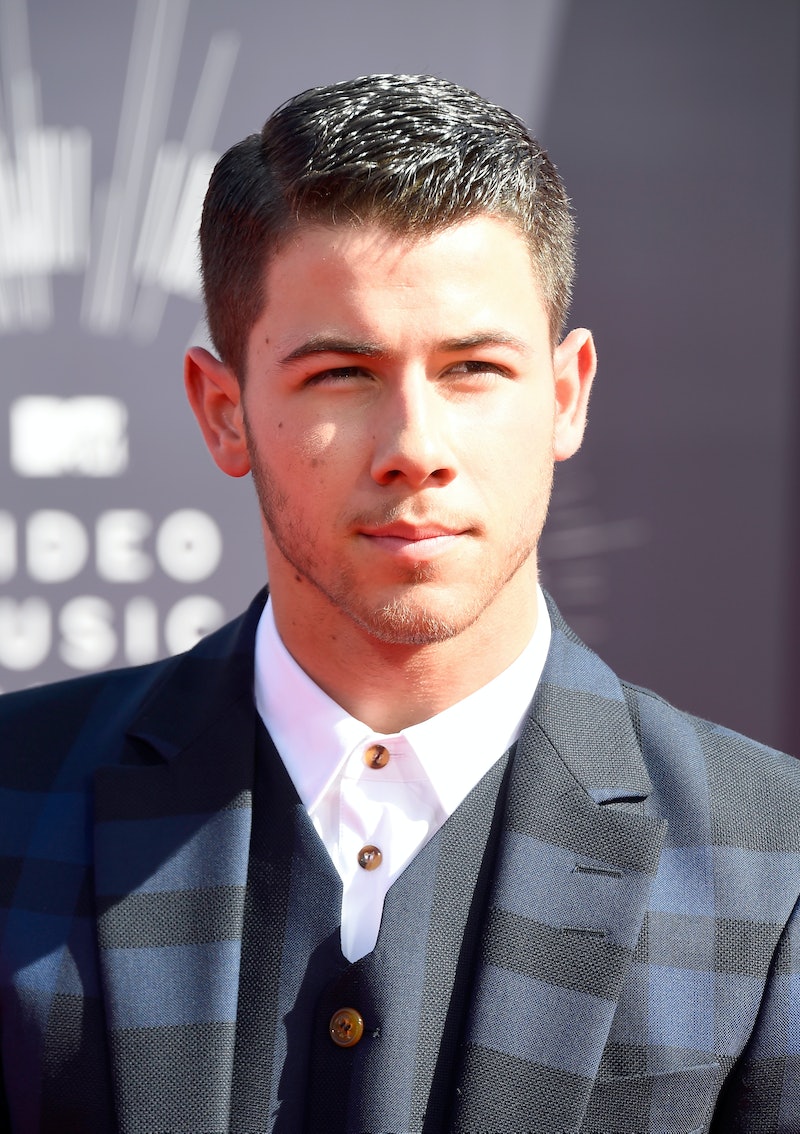 It's been a wild couple of years for the Jonas Brothers, and truthfully, I still really don't know if they are together as a band or not. From breaking up to a (still waiting for it) reunion to Joe Jonas' "My Life As A Jonas Brother" article with Vulture — that I was entirely too invested in — the JoBros are anything but the Disney boy band that I used to know. Now, the youngest Brother Jonas, Nick, has just debuted his new single "Jealous," which is on his debut album, set to come out November. And let me tell you, it is steamy.

Nick Jonas, who is dating Miss Universe (2012) Olivia Culpo, revealed that his new single "Jealous" speaks on the real life woos of being in a relationship. Nick opened up to E! recently, saying "Jealous" is "...when someone is checkin' out your girl and you're out, and it's that whole experience I think a lot of men relate to but don't actually talk about." Got to love a JoBro that keeps it real for us. So when the song debuted, I was obviously curious as to how what Nick had to say about being jealous in relationships, and the song definitely didn't disappoint in lending an eye into what Nick Jonas is like as a boyfriend.

"I don't like the way he's lookin' at you, I'm starting to think you want him too."

Nick, Nick, Nick, starting out the song with a bang. Is it just me, or does it come off like the insecure BF that thinks you're hitting on the waiter at Chili's when you ask for more ranch?

"And I'm puffing my chest. I'm getting ready to face you, can call me obsessed."

Kind of getting the vibe that he wants to look like the man and would probably be that guy to punch a wall to prove it. But is it all for show?...

"I still get jealous"

At least he admits it, right?

"I wish you didn't have to post it all, I wish you'd save a little bit just for me."

Ohhh, so he is one of guys who doesn't like that you post all of those sexy selfies on Insta. It's your Insta, you post what you want girlfriend!

"It's not your fault they hover"

Damn right it isn't her fault if they "hover."

"Cause you know I get excited, When you get jealous too."

Oh, so that's what this is about. A little cat and mouse game. I see you Nick.

So now that we have more insight as to what type of boyfriend Nick Jonas is, check out the new single in its entirety below. There's a lot of falsetto, and it's pretty effing great.

More like this
Don't Worry, Darling, Chris Pine Appears To Be Single Right Now
By Casey Cipriani and Jake Viswanath
Rhys Ifans Has A Good Reason For Keeping His Love Life On The DL
By Maxine Harrison
Gigi Hadid’s Dad Shared What He Knows About Those Leonardo DiCaprio Rumors
By Brad Witter
Who Is Nick Cannon Dating & How Many Kids Does He Have?
By Jordyn Tilchen and Radhika Menon
Get Even More From Bustle — Sign Up For The Newsletter