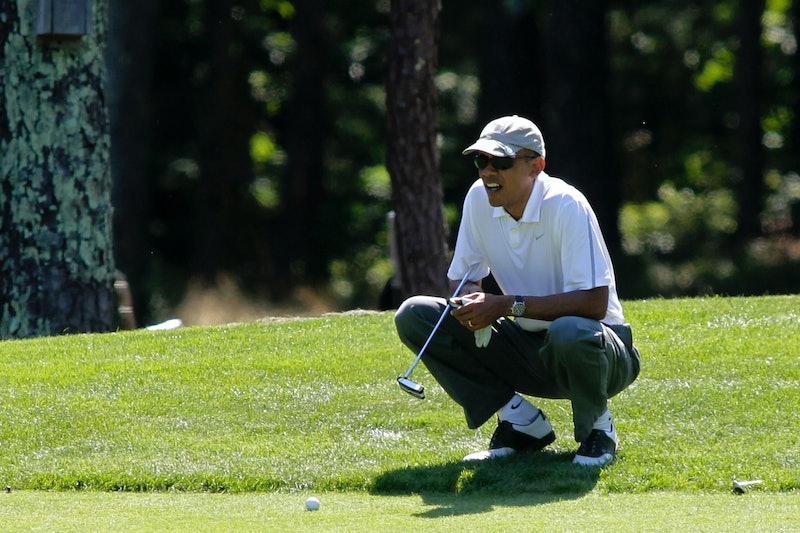 President Obama had a tough summer. His August vacation to Martha's Vineyard ended up not being a vacation at all, as domestic and foreign crises from Ferguson to eastern Ukraine escalated. But presidential duties never stop, which meant Obama had to address some pretty grim events between his downtime. In a recent interview with Chuck Todd of Meet the Press, Obama apologized for his golf outing after James Foley's murder by members of the Islamic State of Iraq and Syria — an outing that received a ton of criticism from the public.

On Aug. 20, Obama addressed the murder of Foley, a freelance photojournalist who was abducted by terrorists in Syria in 2012. The president condemned the violent act of ISIS while also memorializing Foley, calling him "a man who lived his word." He then went on that infamous golf outing.

Chuck Todd was forward with the president in his recent interview, asking him outright: "You went and golfed. Do you want that back?" Obama admitted that yes, it was a mistake to head to the green right then.

You know, it is always a challenge when you're supposed to be on vacation. Because you're followed everywhere. And part of what I'd love is a vacation from ... the press. Because the possibility of a jarring contrast given the world's news, is always ... going to be there. But there's no doubt that after having talked to the families, where it was hard for me to hold back tears listening to the pain that they were going through, after the statement that I made, that you know, I should've anticipated the optics.

The president also admitted that the presidency — and politics in general — is a sort of "theater" where one is always on display. And Obama claims he just may not be good at it, or even used to it after six years in office:

Obama emphasized that despite his untimely golf outing, the real issue here is not how he spent his Martha's Vineyard vacation, but whether or not he's doing an adequate job of protecting the American people. The president clarified to Todd that while the administration and Congress are committed to defeating ISIS, they're not "looking at sending in 100,000 American troops."

The president again reiterated his support of an international coalition to fight ISIS, as well as the continued use of airstrikes to hit terrorist targets in Iraq. "I'm always going to do what's necessary to protect the American people," Obama said.