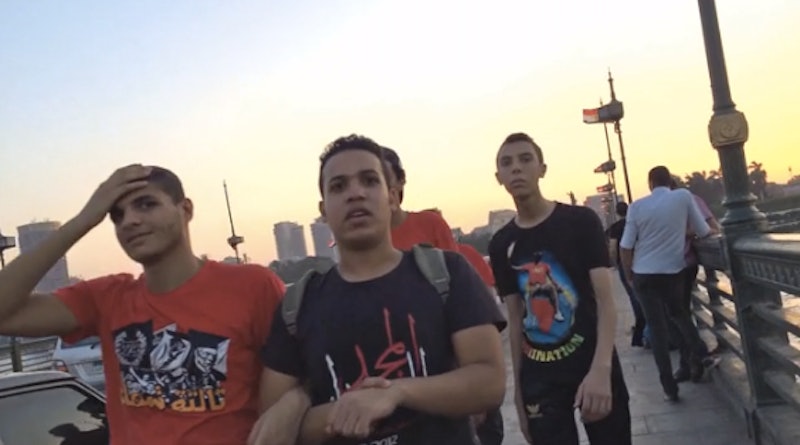 From catcall flowcharts, to powerful posters, to debating whether or not it's OK to take it as a compliment, it's clear that women across the states are taking a stand against street harassment (myself, a greater New York City-dwelling female, included). But how exactly is the issue effecting women in other parts of the world? Well, Filmmaker Collette Ghunim's video "Creepers on the Bridge" shows what it's like to be a woman walking by herself in Cairo, Egypt. The results? I thought I had it bad.

According to HuffPo, "Creepers On the Bridge" features footage Ghunim shot while walking down a busy street in Cairo. In the video, which she filmed by inconspicuously with her phone, it's clear that street harassment in the city is out of control. Nearly every man who passes blatantly stares at her with zero restraint — some even appear to be speaking to her.

Fortunately, American-born Ghunim has big plans to take a stand against this issue. "Creepers on the Bridge" is only a small piece of "The People's Girls" — an anti-harassment documentary project Ghunim and documentary filmmaker Tinne Van Loon are currently producing. To fund the project, Ghunim and Van Loon created a Kickstarter in order to better convey their message — a message that could shed a much-needed spotlight on the growing sexual harassment problem in Egypt.

UN Women reported last year that over 99 percent of women surveyed in Egypt have been "subject to one form or another of harassment." In other words, nearly every woman in the country has been sexually harassed. Despite Egypt's very recent efforts to criminalize sexual harassment, as reported by the Guardian, the issue is still affecting it's female residents to an alarming degree. However, Van Loon explains for HuffPo that, with the documentary, she wants to bring awareness to street harassment as a global issue, not just one in Egypt. "This by no way means that all Egyptian men are harassers, or that somehow this is an Arab or Muslim problem," Van Loon said. "This is a problem of a patriarchal society, which is unfortunately worldwide." She also notes that "not all men are like this," no matter where they come from.

So what, exactly should we expect from Ghunim and Van Loon's film? According to the Kickstarter, "The People's Girls" will feature footage of "what it feels like to be objectified in the streets" in Egypt, as well as narratives from an Egyptian activist against sexual harassment, — who uses storytelling theater pieces to better illustrate her view — a "tuk-tuk" driver, and an Egyptian lawyer at a women's right organization. The half hour documentary is set to be released early next year.

Now, Ghunim isn't the first to do some undercover research on the streets of Egypt. HuffPo reported that last year, a 24-year old male actor, Waleed Hammad, dressed as an Egyptian woman, and walked down the streets of Cairo, with a hidden camera. HIs motive? To also show the volume of sexual harassment a woman faces on a daily basis for an investigative television report. The issue naturally sparked a debate in the country, but also raised some much needed awareness to the issue.

As far as "The People's Girls" goes, I'm intrigued to see the completed project. I hope more women (and men) like Ghunim and Van Loon take a (loud) stand against the issue in in across the globe.