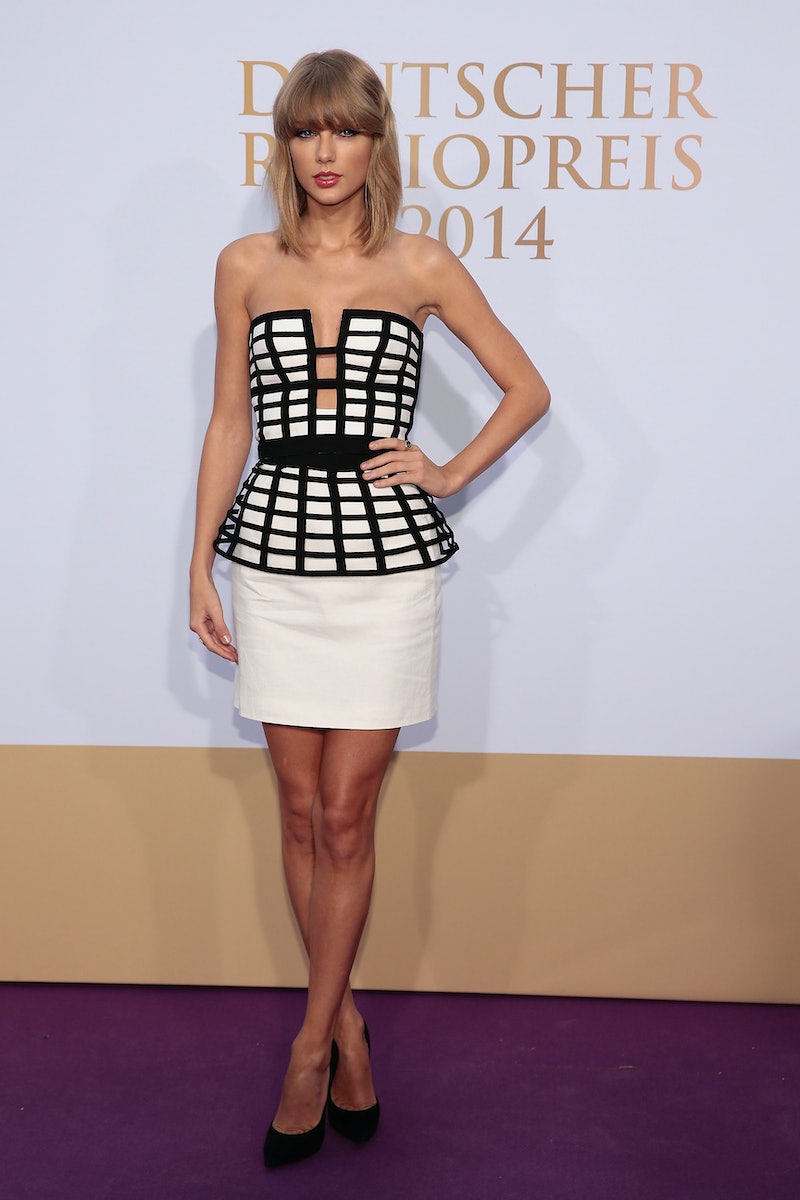 "Shake It Off," the smash-hit lead single from Taylor Swift's upcoming new album 1989, may not be about a boy, but that doesn't mean that Swift is done dishing about her exes in song. Swift's new interview with Rolling Stone confirms that there are still a number of songs about guys on 1989 . In fact, Rolling Stone's Josh Eells says that it "seems clear" to him that "many" of the romantic tracks on Swift's new album are about One Direction's Harry Styles. Oooh! I was hoping that this would happen.

Though he admits that Swift was tight-lipped about Styles during the interview (she'd only say that the two are still friends) Eells suspects that she's opened up quite a bit about their relationship on her new album (as is her wont). Eells specifically names four songs that he thinks are about Styles: "I Wish You Would," "All You Had to Do Was Stay," "Style," and "Out of the Woods." (Yes, one of them is really called "Style." More on that in a second.)

Swift also revealed during the interview that she's made a conscious decision not to date anyone right now in an attempt to give herself a break from the constant media attention. That being said, I still don't feel too bad about mining Swift's new songs for information about her love life. After all, she willingly puts these clues into her music — she has to know that fans are going to speculate about them and draw their own conclusions!

If the four songs mentioned in Swift's Rolling Stone interview are in fact about Styles, here's what they could say about their relationship:

He Wanted to Be Close to Her

According to Eells, "I Wish You Would" is "about an ex who bought a house two blocks" away from Swift. It would seem that, on some level, he wanted to be close to her...

...And Yet, He Still Couldn't Commit!

That lovable rascal! Reportedly, "All You Had to Do Was Stay" is about a former boyfriend who, for whatever reason, was never able to make a commitment to Swift. Curious.

"Style" (subtle, Taylor!) is a "Miami Vice–sounding throwback" track about Swift's sexy times with a super cool dude with "slicked-back hair." Apparently, Swift remarked during the interview with a grin, "We should have just called it 'I'm Not Even Sorry.'"

Their Time Together Was Tumultuous

"Out of the Woods," which was co-written with fun.'s Jack Antonoff (boyfriend to Swift's good pal, Lena Dunham), is about an uncertain and unpredictable relationship. It was inspired by a snowmobile crash that sent both Swift and her ex to the hospital. The song includes the line, "Remember when you hit the brakes too soon/Twenty stitches in a hospital room." Eells notes that given the way that the paparazzi keep tabs on Swift, it's kind of strange that we haven't already heard about the incident. "People think they know the whole narrative of my life," Swift said. "I think maybe that line is there to remind people that there are really big things they don't know about." Interesting.

Well, I didn't think that it was possible for me to be even more excited for Swift's new album, but I guess I was wrong! 1989 comes out on Oct. 27.