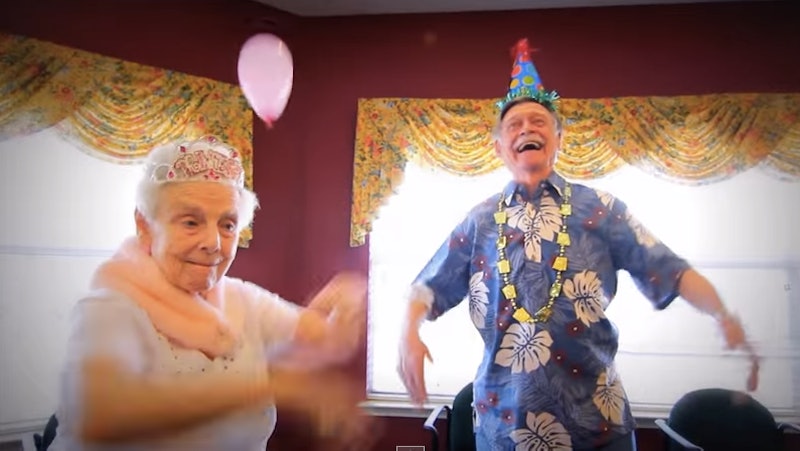 If you've ever heard Taylor Swift's new song, "Shake It Off," you likely can't get it out of your head — for days. You probably wake up saying, And that's what people say... And go to bed at night mumbling something about this... sick... beat... Don't worry. You're not alone. None of us can get that song out of our heads — including the folks at one retirement home, who made a parody video of Swift's song.

Kayley Nell Walker changed the words of Swift's ubiquitous song to suit all the nanas and the papas of the world. Walker filmed an adorable video, replete with the AARP generation singing the words to the parody, at her grandmother's retirement home, and the result is three minutes and 49 seconds of cuteness.

If given the choice, I'd probably opt to hear Swift's version on repeat over this one, but not gonna lie: this video is pretty dang amusing and gives Swift and her giant necklaces and dancing ladies a run for her money.

Wanna have another song stuck — one that's really similar to Swift's "Shake It Off" — stuck in your head for the next few days? No? Okay, well, then watch this hilarious video on mute. Just, whatever you do, make sure you watch it. Very cute.

More like this
The Ticketmaster Senate Hearing & Taylor Swift Tickets Debacle, Explained
By Jake Viswanath
Taylor Swift Visited The 'Glee' Set For This Bizarre Season 5 Episode
By Grace Wehniainen
Watch Kelly Clarkson Sing A Taylor Swift Breakup Song About A Toxic Relationship
By Alyssa Lapid
Taylor Swift May Miss The 2023 Grammys For Reasons Fans Know “All Too Well”
By Jake Viswanath
Get Even More From Bustle — Sign Up For The Newsletter
From hair trends to relationship advice, our daily newsletter has everything you need to sound like a person who’s on TikTok, even if you aren’t.