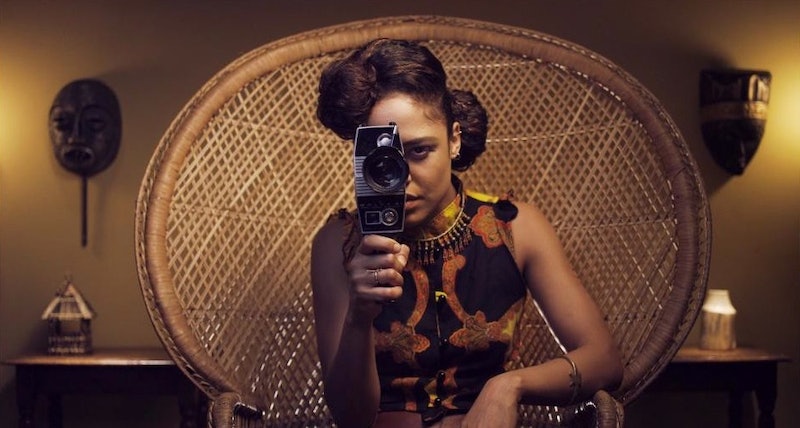 Thank the Internet gods for crowd-funding, because that's what's largely responsible for bringing us the upcoming indie film Dear White People, which premiered at Sundance this year and is coming to theaters on October 17. And it's that same crowd-fundy spirit that brings a new poster for the movie which was released today, and it's fantastic. The film's new one-sheet, which debuted on Vulture, features a close-up of the character Lionel's afro and his frustrated, exasperated bespectacled glance underneath as a white arm reaches down and touches his mane.

The designer of the poster is Nikkolas Smith, who has a real-life dream job as a Disney Imagineer; he saw the film earlier this year and designed the poster for fun, but when he sent it writer Justin Simien, it was clear that the simple design captured the whole essence of the movie.

As Smith himself said of the ingenious, telling poster,"Been there, felt that! I knew if I could capture that 'gravitational pull' moment in one shot, it could be equally hilarious." In fact, the seemingly "non-threatening" act of white people asking to touch black people's hair has become kind of a coda in social media this year, a microcosmic event that illustrates simply and efficiently the kinds of microagressions black people face on the daily.

BuzzFeed premiered a hilarious and excruciating video earlier this summer, "If Black People Said the Stuff White People Say," which of courses highlights the invasive act of "Let me touch." "Can I touch your hair" is really shorthand for "You are exotic and different and available for my exploitation which I will mask as curiosity! Why are you mad about that? Your body is public property to prod at my whim!"

That's why the new poster is so great—it's even more digestible than these spoof PSA spots that Dear White People rolled out in August, as it points visually to the literal invasion of space that constitutes the daily lives for so many "black faces in white spaces" (as the film itself says). It bodes well for the upcoming film, which, as the poster also denotes, is "Monumentally topical." Even that phrase itself is cleverly satirical; the issue of racial tensions and race relations should not be trendy or topical, because it's a constant reality, and should be constantly, aggressively addressed. Dear Dear White People, I salute you.