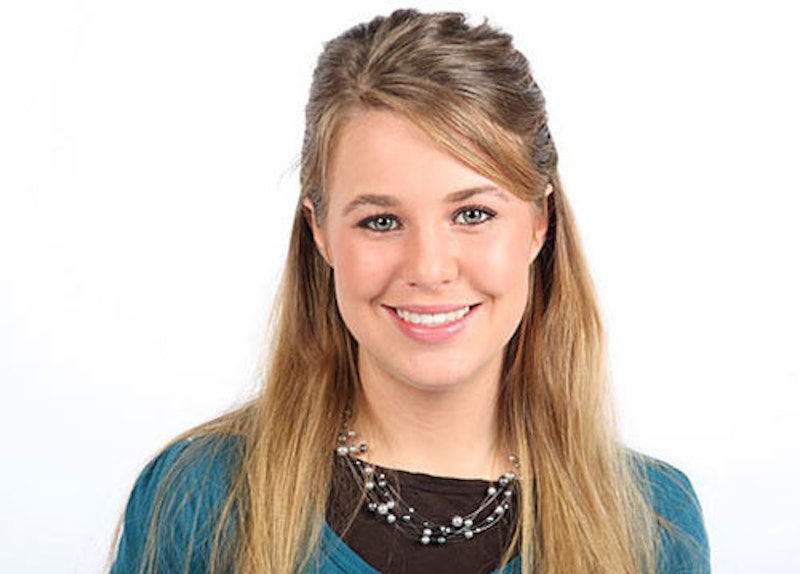 Oh, the mysterious and elusive oldest daughter from TLC's 19 Kids and Counting , Jana Duggar. What is up with that girl these days? With the recent marriage of younger sister Jill to Derrick Dillard (and the announcement of her pregnancy!), and Jessa's engagement to Ben Seewald, I can't help but wonder what Jana's plans are. In Duggar tradition, women of the family tend to find a man (with patriarch Jim Bob's help, of course) to settle down with and start popping out those babies ASAP. But not Jana. I thought she might follow soon behind older bro Josh when he tied the knot with his now-wife Anna in 2008, but so far, Jana's showing no signs of flying the coop anytime soon.

But let's get one thing straight: There is absolutely nothing about Jana that suggests she's anything but prime courting material (I know, I know — I cringed as I typed that out. But such is life on the Duggar compound). She's beautiful, she has a sweet, down-to-earth personality, and after helping out with the clan at home, she's bound to have the patience of a saint. There's no reason why she shouldn't have a league of suitors knocking at Jim Bob's door, literally praying for a chance at a chaperoned date. But Jana's not engaged — and it doesn't appear that she ever has been — and that's what I love about her. Jana is an independent woman and she's doing whatever the hell she pleases... although she probably wouldn't describe her current "season of life" in exactly those words.

But just because she's not courting doesn't mean she's not keeping busy. As of 2011, Jana was enrolled in an online program called College Plus, where students can take classes that will later transfer to physical colleges. At the time, she was considering a nursing degree, which would make sense since she's trained as both a first responder and a midwife. And how awesome would it be if Jana was the first Duggar gal to start her own career? That screams spinoff material to me. Jana also does missionary work with Journey to The Heart, a week-long faith-based retreat for teens and young adults in Michigan. Jana attended herself when she was younger and even pulled back from her other trades to devote more time to the retreat.

And while the most probable explanation of Jana's single status is that she and Jim Bob haven't found quite the right match for her yet, fans on FreeJinger.org speculate that Jana's planning on making an escape from her family's way of life — another thing I would totally love to see. Given that Jana's been featured less and less and seems to be fading into the background on 19 Kids and Counting, it wouldn't be a total shocker if the reason was because she's trying to make a break for it. This could just be because the spotlight is mostly on Jill's upcoming nuptials, but I can dream, can't I?

Besides, the only negative I see to Jana not courting right now is the fact that it appears that the girls of the Duggar fam only sign up for Instagram once they've got a ring on their finger — just ask Jill or Jessa, whose selfies make me wish they were my personal hairstylists on a daily basis. Can we start a petition for each individual Duggar to make their own account? I know we can do it!