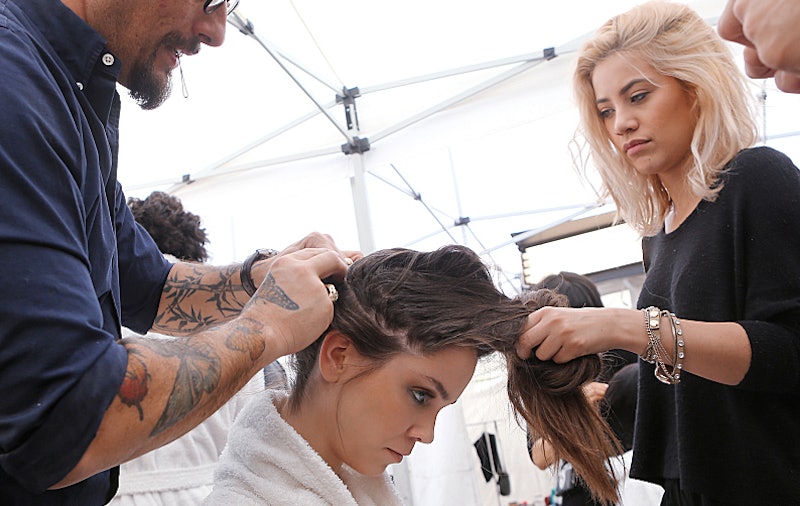 It's makeover — sorry, "Ty-over" — time! This year's America's Next Top Model salon fest had a fun, scavenger hunting twist: Tyra hid little boxes with different makeover looks all over the house, along with a pair of shears. Whoever found the shears got to find out what their makeover would be ahead of time. As fate would have it, it was Denzel who found the shears, and that's where we got our title: "The Guy Who Gets a Beard Weave." And I have to say, he took the news a lot better than I would — he actually seemed stoked by the concept, citing the fact that he can't actually grow a beard on his own.

Next, came the traditional freak-outs over the shaved head ("Do not, do not touch my hair," etc — heck, it wouldn't be ANTM without some good ol' fashioned makeover drama), but luckily last season's runner up-runner up (Cory Wade Hindorff) was there to assuage their fears: After all, he grew to love his shaved head — but not before shedding some tears over looking like a "cueball," if my memory serves me correctly.

All in all, the episode was just as entertaining as I'd hoped it would be — we got the prerequisite tears, jubilation, smugness, that make ANTM the great couch-sloth binge-watch it is. Let's take a peek at some of the best (and worst) looks!

"We lost a good soldier out on that field today," eulogized Adam as he fake-cryed over his (admittedly luscious) locks. He didn't let it get him down, though. No sooner was his hair gone, that he was commenting about his new "badass" look. Also notable: When he video-chatted with his mom, she told him to tell Tyra that they made him look "much, much" better (aww).

He wasn't the only one to get a buzz cut, either:

The change is minimal, but overall positive. Good on you, Ben!

Apparently, they cleaned up the sides... but it looks pretty much the same to me.

Meh before, meh after. Tyra cited Karlie Kloss as the inspiration behind this chop, but I'm not seeing it at all.

Most Likely to Succeed:

I suppose he already succeeded in a way: His bro Matt waxed poetic on the look, later confessing, "I like women, but when I look at Will, do I go, 'holy shit, God did something really beautiful with this person?' Yes!" Adorable.

Romeo's makeover was the perfect complement to his occult leanings — and he was the biggest fan of the look of all, saying, "That icy blond hair was just that cherry on top of a great model ice cream." Tee-hee.

OH MY GOD, WHY. Pure shock value is the only reason I can think of (also, his mom's reaction was pretty great: "No you didn't say lace front!").

Denzel was a super good sport about his weave, but luckily it turned out to be a mistake: thank god for the "Ty-do-over."

I'm with the newly-returned Miss Jay on this one: Her weave was pretty gorgeous. Plus, she seemed really excited that the ombre effect matched her skin.

Seriously, spot the difference (besides some mousse and a blow dryer, I mean).

No, wait I take that back. This is the most indistinguishable by a landslide:

Because Keith here didn't get a makeover at all.

She looks like Lindsay Lohan after a bender, IMHO. Keith also had a lot to say about the look — first he joked that it bore a resemblance to Children of the Corn, and later, in his confessional he said this gem: "She feels she looks like a stripper — she does." He was quick to backtrack, adding "But that's okay, I love strippers!"

What do you think? Who looks great? Who got totally shafted?