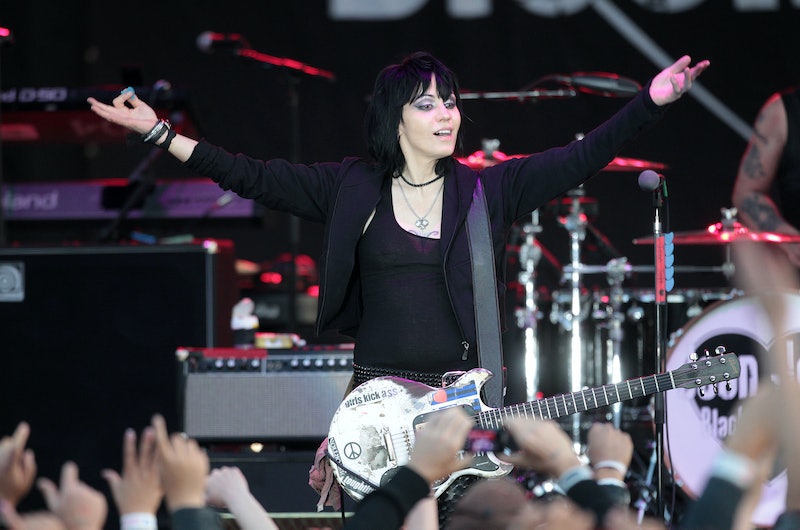 Today in 1983, Joan Jett played JFK Stadium in Philadelphia with The Police, R.E.M. and Madness.

Why is that important? The fact that Joan Jett is the only woman in that sentence tells you exactly why it's important.

Rock music, especially popular rock music, is seen as an overwhelmingly male-dominated profession. In the 2012 Grammys, out of the three different categories for Rock, Hard Rock/Metal artists, only one artist with a female member was nominated — Halestorm, the first artist with a female member to win an award for those genres in the past five years. So, you can imagine that back in 1983, it wasn't much better for female artists.

Joan Jett knows this firsthand. She started off her career in the early '70s as one of the founding members of an all-girl band: The Runaways (you know the movie where Kristen Stewart made out with Dakota Fanning? That was based on them.) They were a hit in Japan, but didn't make much of an impact in the U.S. Part of that was because of the obstacles an all-female band faced in the U.S. – Jett has often spoke about how they were frequently told that girls can't play rock music:

Being told that girls can't play rock 'n' roll-I mean, even as a kid, it was so illogical to me-it's like, what do you mean? That girls can't master the instruments? I'm in school with girls playing cello and violin and Beethoven and Bach. You don't mean they can't master the instrument. What you mean is they're not allowed, socially-it's a societal thing. You're not allowed to play rock 'n' roll because rock 'n' roll means you're covering Sticky Fingers. Rock 'n' roll means "Whole Lotta Love." You go listen to these songs and albums again and realize how dirty they sound, how much sex is dripping from them. And that kind of stuff is very threatening. It seems like really displaced energy to me for so many people to have been so up in arms about The Runaways playing rock 'n' roll. So we were a little outrageous, and part of it was to stir people up.

Jett's solo venture after The Runaways broke up was, initially, not much more successful. Once she recorded her solo album (originally self-titled, but later re-released as Bad Reputation), it was rejected by 23 record labels. Jett had to independently release it under her own label, where it ended up doing pretty well.

Jett finally reached rockstar status with her backing band, The Blackhearts. They recorded "I Love Rock n' Roll," along with a number of other Top 40 hits, and performed on sellout tours with Queen, The Police and Aerosmith. Finally, she had cemented herself a place among the hallowed halls of American classic rock.

None of this is news. Most of it might not even be new to you. But it's important because Joan Jett is one of a very small number of female musicians who has earned herself a place in the history of popular music. She and Joni Mitchell are the only two women on Rolling Stone 's list of 100 best guitarists. She still has yet to be inducted into the Rock and Roll Hall of Fame, where only 40 of 296 members are female.

Women might own pop music right now, but that's not a genre that popular culture tends to take seriously. Big music publications may be branching out now with hip-hop, electronic music, and a host of other genres, but rock and roll has always been a music journalist's bread and butter — and it's typically not a genre that takes women seriously.

It's important that we remember days like today, when there was only one woman to stand up and play with two of the most popular and critically-acclaimed bands in recent history. Popular music history tends to forget the achievements of Joan Jett and other women like her, so we need to remember. Because as Jett herself said in 2010, not a lot has changed since then:

The media says that equality for women has arrived, but if you look around, you still don't see girls playing guitars and having success with it. What's different is that there are now girls in every city playing in bands. Girls feel that it's okay to pick up a guitar, which they didn't when I started. But as far as getting accepted by a wider audience, it's still not happening.