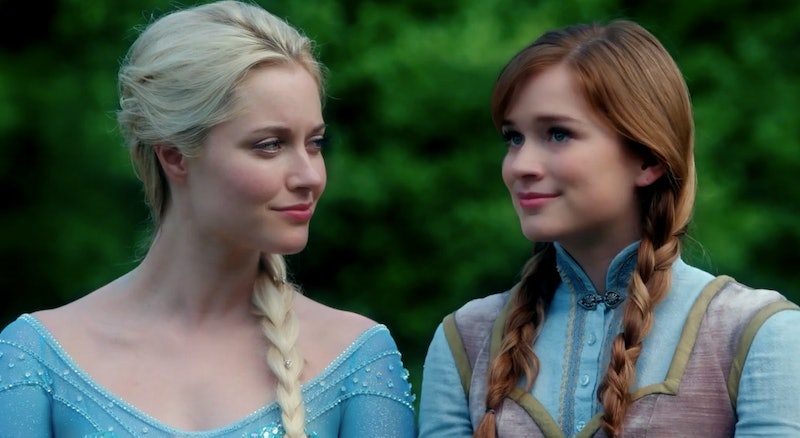 I guess we know whose bad-side Elsa's going to get on in Storybrooke now — and it's not Rumpelstiltskin's. The latest extended promo for Once Upon A Time Season 4 is here and it looks like Regina and Elsa will brawl during the first part of OUAT's new season. When are Ed Kitsis and Adam Horowitz going to cut this queen a break? Once Upon A Time 's Frozen storyline spoilers have more or less dominated the summer following the introduction of Elsa during the OUAT Season 3 finale. But this new promo introduces some proof that a handful of other, non-Frozen-related theories and fan wishes might also come to fruition when Once Upon A Time Season 4 premieres on Sept. 28.

First, I have to say it — this promo is kind of absurd and sounds a lot like one of those hilarious Honest Trailers, like this one for Frozen . What's with naming off all of the series regulars and a handful of recurring characters? I mean, it's not like this is Game of Thrones, we don't need a refresher like that. But, anyway, once you can get past the jarring opening of Emma pleading with Henry to believe in magic and those unnecessary introductions, there's some important stuff. For example, the appearance of Mulan and the fact that Elsa is hellbent on being the queen around these parts and Regina's so not into that. Watch the new extended promo here:

So, what does this mean for Season 4? Is there really room for two queens in Storybrooke? Here are some Season 4 theories based on this promo's reveals:

The Main Conflict Will Be Between Regina & Elsa

I was under the impression that Regina would be consumed by making Emma pay for bringing Maid Marian back from the past and ruining her second chance at love. Apparently, that's not going to be the only issue on her radar when OUAT returns. In the promo, following Elsa's claim that she's the queen, Regina tells her magic mirror, "She needs to be removed."

Now, it's not entirely clear whether or not she's talking about Elsa — for all we know, she could be talking about Emma or Marian at this point — but OUAT fans can definitely guess that Regina won't be cool with another queen trying to eff things up in her town. OUAT Season 3 was split into two parts — the conflict in Neverland and the conflict between Regina and Zelena — so, we can guess that Season 4 will follow a similar pattern with Elsa's arrival in Storybrooke. And, while it'd be kind of terrible for OUAT to feature more girl-on-girl drama this season, there definitely isn't room for two queens in Storybrooke.

PRAISE. For all of you OUAT fans out there that were hoping that Jamie Chung's Mulan would return in Season 4, it looks like your wish might've been Kitsis and Horowitz's command. After the promo runs through the series regulars, it flashes through the Wicked Witch (Zelena), Mulan, and Pan, along with a handful of others. Why is this important and absolutely telling that these characters will have a place in Season 4?

Well, first, they're not going to waste time in a one-minute promo on characters that will mean nothing to the season. That'd just be silly, especially after they'd wasted time introducing characters we already know. And second, among these recurring characters was Kristen Bauer van Straten as Maleficent, who's confirmed to reprise her role in Season 4. The fact that Mulan, Pan, and Zelena are included in the same section of the promo as Maleficent is absolutely a hint that we'll see them this season, even though they're not confirmed yet.

Hook & Emma Are Going To Make It

At the end of the promo, Emma tells Hook, "This isn't over," and he responds, "It never is." What exactly isn't over? What exactly is the "this" she speaks of — it could be any number of things ranging from how their trip to the past changed the present in Storybrooke to the return of Pan and Zelena. But really, is that the right question to ask? Fans watched as OUAT Season 3 spent literally an entire season setting up Hook and Emma to be together and finally, in the second hour of the season finale, they kissed and made it official. And it looks like they're still at it in Season 4, or at least they're at it in this promo. We already know that the road for these two won't be easy, but it appears that they've come to an understanding about what exactly their relationship's obstacles will be and that's a very, very good sign.