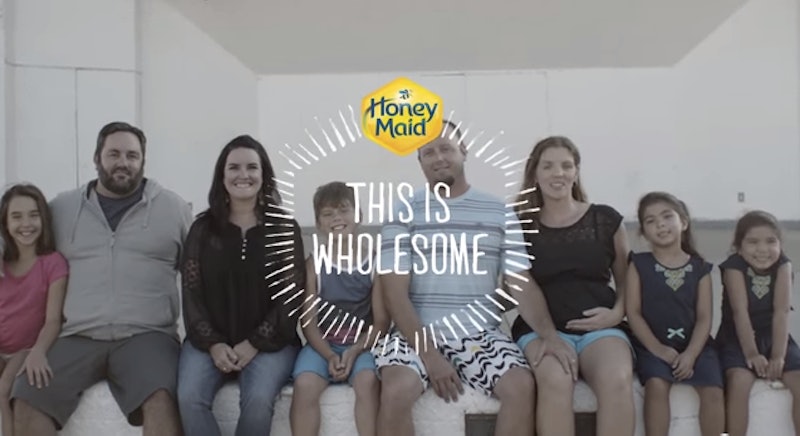 Honey Maid’s “This is Wholesome” campaign released its next installment yesterday, a commercial featuring families of divorce. Honey Maid’s #NotBroken campaign tells viewers “Just because a family has broken up doesn’t mean they are broken.”

The previous commercials for the graham crackers featured interracial and gay families, provoking protests from conservative groups and viewers, who claimed that the ads were anything but wholesome. The new theme of divorce is less controversial, though it affects more families in a wide spectrum of ways. Ad Week reports that around 40 percent of American families are affected by divorce, and that one in three weddings forms a step family. The commercial itself is about a boy named Issac who splits his time between his two families and tells the camera, "Sometimes it's hard to explain our family to people…The difference between the two families is, my step dad has black hair and my dad has brown." To generate buzz about their new campaign, Honey Maid is asking viewers to tweet about their own #NotBroken families.

Even though it’s great to see diversity being embraced, these commercials are clearly a strategic way of procuring sales. USA Today speculates that these ads are effective because millennials crave diversity in their advertising, something that big brands such as Coca-Cola and General Mills have been capitalizing on as well. And so far its been paying off. Senior marketing director at Honey Maid, Gary Osifchin, tells USA Today that sales rose seven percent after the company aired their multicultural family campaign in March, and there have been a 400 percent increase in Google searches for "Honey Maid."

Still, many families will relate to this sweet ad. Even though it’s an aspirational depiction of a perfectly imperfect family, these ads are still embracing family diversity in a great way. Especially compared to other crap advertising out there, this really is wholesome.