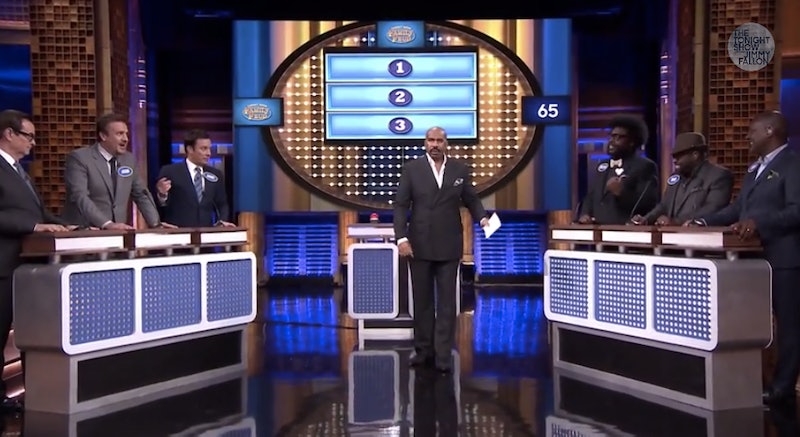 Television worlds collided Monday night when Family Feud appeared as a special segment of the Tonight Show With Jimmy Fallon. Steve Harvey brought some saucy categories and extra oomph for his foray into late night. The Roots crew faced off against Fallon, Jason Segal and Tonight Show announcer Steve Higgins. Considering the game is called Family Feud, and The Roots have been together since 1987, it's no wonder they totally wiped the floor with "The Fallons."

Questlove, Black Thought, and James Poyser ran away with the categories of "Other names for marijuana" and "Instruments least likely to get groupies." However, both teams were stumped when it came to "I like to play with my____." Both "ding dong" and "ball" were silly, obvious answers, but neither of which actually made it to the top three.

Even though it was a star-studded game, Harvey totally stole the spotlight. His deadpan reaction to ridiculous answers are absolutely hilarious. What was even more entertaining was how he shut down Fallon, who clearly couldn't handle someone else hosting anything on the Tonight Show. Fallon continually chimed in about the rules of the game and he was met with the most powerful side-eye in all of the gameshow universe.

The segment is absolutely hilarious and it would be fantastic to see it return. Here are all of the "families" we'd love to see square off against The Roots in a champions round.

The 8G Band with Fred Armisen

Both Jay and The Roots curate major music festivals in the city of Brotherly Love every summer with Made in America, the Roots Picnic, and Welcome America. Let's see if The Roots can keep their cool facing off against these mega-moguls of music. Blue Ivy is obviously included.

The Cast of Parks and Recreation

Who could actually stand the intimidation of Ron or Donna? Also, I'm just dying to hear what kind of answers Andy (Chris Pratt) would come up with.

Take a look at the hilarious clip here: