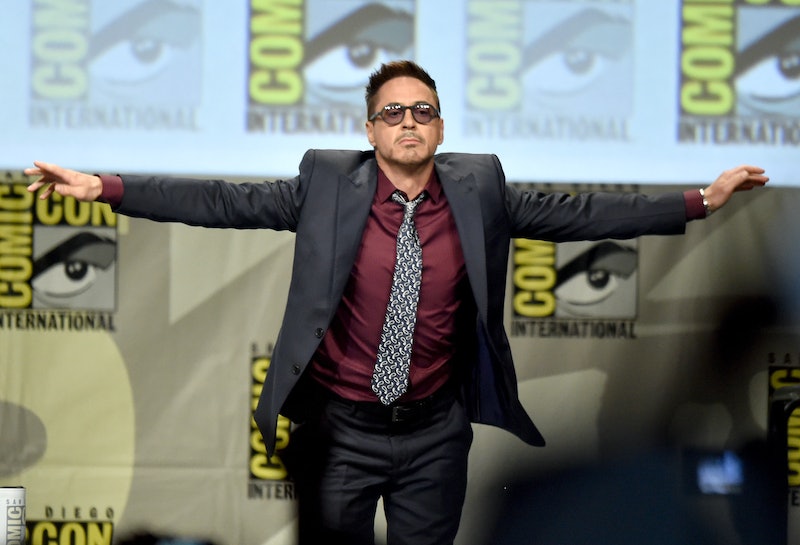 Since the dawn of the modern Marvel era, it has not been uncommon to compare one Robert Downey Jr. to the character that relaunched his career. Downey Jr. and Tony Stark, after all, have some key similarities: The privilege, the bad boy rep, the wit, the ego. The two have become inseparable in the modern superhero landscape — from each other and from the studio that launched (or, rather, re-launched) them. The ego in particular has long followed Downey Jr. around.

In fact, he's reveled in it. When Jimmy Kimmel told Downey Jr. on his show that "you're very handsome, don't let anybody tell you different," Downey Jr.'s response was a simple "they don't." And as Entertainment Weekly's Hillary Busis put it after Downey Jr. made an appearance on The Daily Show that further sparked Iron Man comparisons:

Anyone else got a sneaking suspicion that Robert Downey Jr. and Tony Stark are actually the same person? They’re both super-rich bad boys with troubled pasts. Both excel in the same fields as their accomplished fathers. And both have a habit of treating interviews like one big joke, only occasionally trading confident quips for shots of insight.

It's also Tony Stark and Downey Jr. in equal measure who've long been credited with the resurrection of Marvel. Would the modern Marvel brand be what it is today if Iron Man hadn't been as "smart and stupid, stirring and silly, intimate and spectacular" as Roger Ebert wrote that it was? If Downey Jr. hadn't steered Tony Stark to a top-50 spot on Empire's 100 Greatest Movie Characters of All Time? The likely answer is no.

But Marvel's evolved since Iron Man's 2008 release, and the Iron Man movies appear to have come to an end. So how does Downey Jr.'s notorious ego play into this new phase of superheroes? As he lays out for Vanity Fair, it's been an evolution:

I’ve gone from being convinced that I am the sole integer in the approbation of a phenomenon to realizing that I was the lead in the first of a series of movies that created a chain reaction that, if everything didn’t fire the way it was supposed to, there’s no operator, no anything. And you go, OK, life is doing something here that included me but did not require me. But, yes, that role means a lot. Marvel is kind of like this sacred brotherhood.

The Avengers did seem to change quite a bit for the Marvel brand, and for Downey Jr. as the face of that brand. It wasn't just Tony Stark and Pepper Potts all by their lonesome ways anymore — they found their ragtag group of suped-up misfits to save the world right alongside them and make a few billion dollars while they're at it. They certainly appear to enjoy each other's company:

The face of the Marvel brand doesn't appear to just be Robert Downey Jr. anymore. It appears to be bromance.

And they're pretty adamant.

Maybe DC should try to get their actors to act more like they've joined some kind of secret society frat situation?

More like this
Michaela Coel Has Some *Thoughts* About The Nepo Baby Discourse
By Maxine Harrison
Twitter Is Overjoyed By Angela Bassett’s Record-Making Oscar Nomination
By Maxine Harrison
Kukulkan From 'Wakanda Forever' Has A Surprising Connection To Marvel History
By Grace Wehniainen
Rupert Grint Just Shared A *Major* Update About Ron Weasley’s Future
By El Hunt
Get Even More From Bustle — Sign Up For The Newsletter
From hair trends to relationship advice, our daily newsletter has everything you need to sound like a person who’s on TikTok, even if you aren’t.