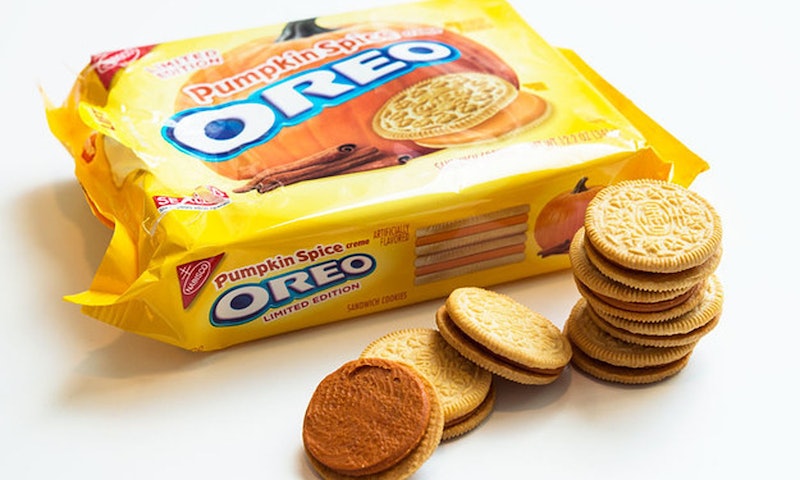 Just in case you’re not already tired of hearing about all the pumpkin spice-flavored edibles available this season, here’s another to add to your list: Pumpkin Spice Oreos are coming, and (because apparently I am incredibly basic) I can’t wait. I’ll be honest: I don't actually remember the last time I bought a pack of Oreos. I was never a huge fan of them as a kid; if any other variety of cookie was available, I’d usually take it over the Oreos, unless it was a Lorna Doone shortbread. These, though? I will buy them. I will eat them. And I will love them. Because cinnamon and nutmeg fill my world with spicy, delicious joy.

Rumors that Nabisco had a Pumpkin Spice Oreo in the making began circling in August, when Consumerist received a photo from a tipster proving their existence. Now confirmed, they won’t hit shelves until Sept. 24; thankfully, though, a variety of media outlets have already gotten their hands on ‘em, so we can at least get a good idea of what people think about them before we all rush out to try them ourselves. The short version? Reviews are… mixed. Settle in for the long version.

A lot of people, including Erin Chack and Matthew Perpetua at BuzzFeed, thought they tasted like a scented candle; for Perpetua, that was a good thing (“I thought it was pretty good, like a nice scented candle”), while for Chack, it was a little less impressive (“It tastes like what I imagine a fall-themed Yankee Candle would taste like”). HuffPo noted that, like the Starbucks Pumpkin Spice Latte, there may not actually be any pumpkin involved in them — but that’s not necessarily a bad thing: “They taste more gingerbready than pumpkin piey, but I'm OK with that,” an unidentified editor said. TIME concluded that they were “good, but not transcendent” (emphasis theirs). I think that’s OK, though. Oreos don’t have to be transcendent to be acceptable. They’re Oreos, after all. No one is expecting them to change the world.

Pumpkin spice not your cup of tea? Never fear — Nabisco has you covered. They’ve also put out Caramel Apple Oreos this season, and according to Dinosaur Dracula, they’re actually pretty good. Miraculously, they appear to both smell and taste like the sticky treats your mom always tell you would rot your teeth when you were a kid. Well played, Nabisco. Well played, indeed.