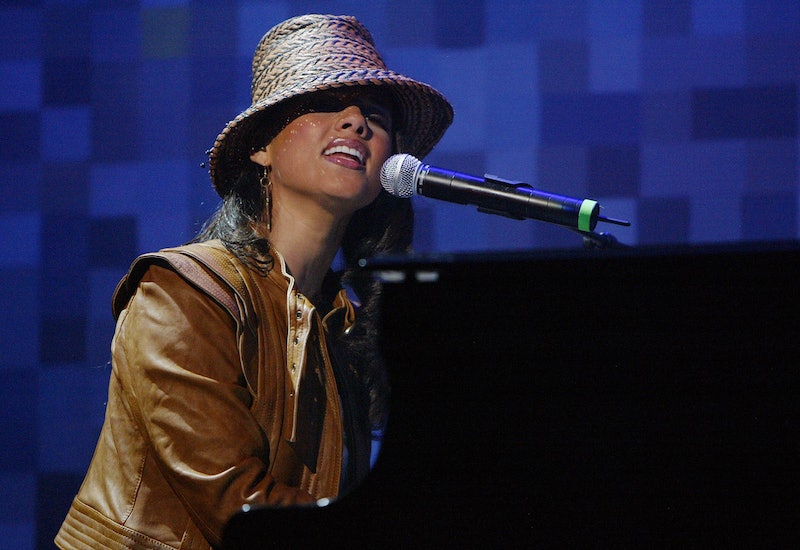 When Alicia Keys described her new album a few months ago, she stated that the music would be more about "what we're going through as human beings." Keys' new song "We Are Here" features the songstress delivering a worldly message that addresses current political and sociocultural issues from Harlem to Gaza, so clearly, she kept her word on the direction of the new music. Since she's expecting another child with husband Swizz Beatz, it's understandable if she's feeling a little mushier than normal toward her fellow human beings these days, but I wonder if the rest of the album can maintain this theme and keep it interesting at the same time?

At its core, "We Are Here" isn't a total bore. Like most of Keys' songs, it contains some simple yet profound lyrics. For instance: "Bombs over Baghdad/Tryin' to get something we ain't never had/Let's start with a good dad/So real but it's so sad," and "No guns made in Harlem/Still crime is a problem." I can appreciate how Keys has made a successful career without delivering fluffed up album fillers, but hopefully every song off her new release won't be one huge "We Are the World" remix.

I don't think anyone is prepared to hear Keys encouraging us to twerk, smoke or drink somethin', and there's definitely room for Keys to offer her perspective on more serious subjects, but I just want her music to be passionate and inviting at the same time. "We Are Here" is compassionate, promotes awareness and understanding, but it also needs to entertain, as well. Bringing up Keys' classic Songs in A Minor might make me sound like a broken record, but that album was Keys at her best. And after listening to "We Are Here," I want nothing more than for Keys to take it back to the basics.

Watch the video for "We Are Here" below: