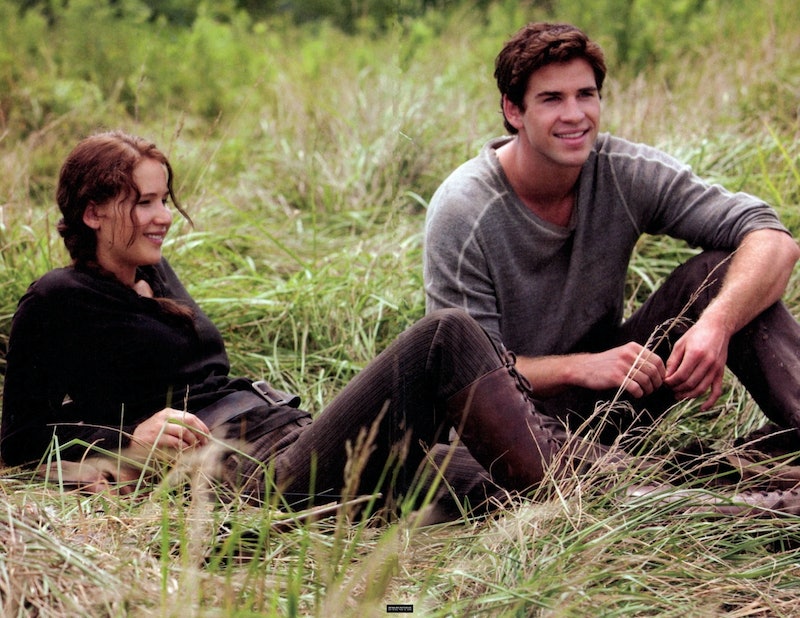 Suzanne Collins' Mockingjay is not what you would call a love story, but there is a love triangle amidst the Capitol takedown and devastating deaths, and there are a lot of moments you can classify as romantic. From the get go in book one, readers begin to separate themselves into Team Peeta and Team Gale. Both boys love Katniss dearly, though in different ways. (Spoilers ahead): In Mockingjay, with Peeta mostly out of the picture you can tell that Gale is trying to win back his friend, but Katniss isn't that same girl anymore and thus their romance is tainted with sadness throughout much of the novel.

It's not an all-consuming, happy love story that Katniss and Gale have between them, but there is no denying that there is love there. As we prepare for the first Mockingjay movie to debut this November, we're sure to see the struggle Katniss endures in choosing between the two men in her life. I hope that Liam Hemsworth can continue doing Gale Hawthorne justice by bringing these 12 romantic Mockingjay moments to life on the big screen.

"I DOUBT THEY'LL ASK FOR DETAILS. THEY SAW [DISTRICT 12] BURN. THEY'LL MOSTLY BE WORRIED ABOUT HOW YOU'RE HANDLING IT ... LIKE I AM."

That Gale is always looking out for Katniss' well-being.

"MAYBE I'LL BE LIKE THAT MAN IN 'THE HANGING TREE' STILL WAITING FOR AN ANSWER."

"The Hanging Tree" is a song in the book which is basically about a man who hangs himself while waiting for his lover to come join him. It's this kind of quote that epitomizes the relationship Katniss and Gale have. Gale wants to find a way to be with her, but he knows she still needs time to decide.

"I SHOULD HAVE VOLUNTEERED TO TAKE [PEETA'S] PLACE IN THE FIRST GAMES. PROTECTED HER THEN."

Throughout the books, Gale is always the guy who would take on that kind of sacrifice to be with Katniss and protect her, even if it meant losing his own life.

"I'M IN PAIN. THAT'S THE ONLY WAY I GET YOUR ATTENTION."

Aw, Gale. My heart aches for you.

"REMEMBER? THIS IS WHERE YOU KISSED ME. [YOU'D] HAVE TO BE DEAD TO FORGET. MAYBE NOT EVEN THEN."

Gale was reeling from the pain of his whipping and under the influence of heavy drugs, but still he holds onto that memory of that time Katniss kissed him because she wanted to, and not because she thought Gale would want her to.

"THE WAY [PEETA] HATES YOU. IT'S SO FAMILIAR. I USED TO FEEL THAT WAY WHEN I WATCHED THE TWO OF YOU KISS."

How heartbreaking for Gale to have had to not only watch Katniss in the arena, but be with another guy too.

"I ALWAYS FELT WRONG KISSING [PEETA] BECAUSE OF YOU."

If that Katniss line doesn't break your heart, Gale's follow up line surely will. "If I thought that was true, I could almost live with the rest of it.”

“I BARELY MAKE IT TO MY MEETING PLACE WITH GALE ... IT'S TOO WIDE WITHOUT HIS BODY BESIDE ME ... I CLOSE MY EYES AND COUNT TO TEN, THINKING THAT WHEN I OPEN THEM, HE WILL HAVE MATERIALIZED WITHOUT A SOUND AS HE SO OFTEN DID. I HAVE TO REMIND MYSELF THAT GALE'S IN [DISTRICT] 2 WITH A FANCY JOB, PROBABLY KISSING ANOTHER PAIR OF LIPS.”

Jealousy. It works both ways with these two.

"OUR ROCKY LEDGE OVERLOOKING THE VALLEY ... THIS WAS THE DOORWAY TO BOTH SUSTENANCE AND SANITY. AND WE WERE EACH OTHER'S KEY."

See, Gale doesn't do all the suffering. Here Katniss is clearly trapped in the nostalgia of a life she had to leave behind.

"I LOOK AT OUR REFLECTIONS AND SEARCH DESPERATELY FOR ANY HINT OF THEM. THE BOY AND THE GIRL WHO MET IN THE WOODS AND BECAME INSEPARABLE. WHAT WOULD HAVE HAPPENED TO THEM, IF THE CAPITOL HAD NOT REAPED THE GIRL? WOULD SHE HAVE FALLEN IN LOVE WITH HIM? MARRIED HIM EVEN? WOULD THEY HAVE BEEN HAPPY, THIS BOY AND THIS GIRL?"

It's a "what if" question that's on a whole other level.

"I WAKE UP TEN TIMES A NIGHT ANYWAY [TO MAKE SURE KATNISS IS STILL HERE.]"

Poor Gale. I can't imagine the fear of having the one I love leave me.

"NOW THE CAPITOL WILL KILL HIM OR TORTURE HIM OR HIJACK HIM. THE CRACKS BEGIN OPENING INSIDE ME, THREATENING TO BREAK ME INTO PIECES. I HAVE ONLY ONE HOPE. THAT THE CAPITOL FALLS, LAYS DOWN ITS ARMS, AND GIVES UP ITS PRISONERS BEFORE THEY HURT GALE."

There's no denying that Katniss cares for Gale and vice versa. These quotes prove that. It's too bad that their love was marred by doubt and pain and tragic circumstances, because the love that comes through in these quotes is a lasting one—only it just never got the chance.