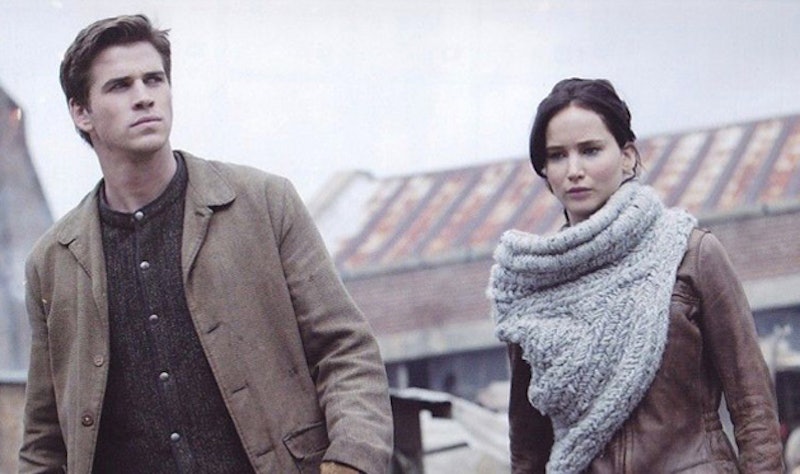 First, the players: There's Peeta, the boy with the bread, the guy who helped Katniss when she was on the brink of starvation and who's had a crush on her from afar since they were itty bitty District 12 kiddies. They grow close in the games, in a way that's intensely romantic for him and more intensely confusing (but notably not not romantic) for Katniss.

There's Gale, Katniss' best friend, whom she's hunted with for years and for whom it's clear Katniss has romantic feelings at the beginning of the first book. The two share a fire in their personality that's undeniable and attractive, though Gale has focused his on rants about revolution and Katniss tends to unleash hers in different ways (for now).

Then there's Katniss, stuck in the middle, feeling things for both but constantly annoyed that she's in a position of having to choose when she honestly has way more important things to think about — like keeping them all alive.

And this, right there, is where The Hunger Games as a series — and Catching Fire as a film — gets it right when it comes to portraying a love triangle.

When news spread that the love triangle was going to be more at the forefront of Catching Fire, I was intensely skeptical. Here's what I wrote at the time:

To repeat a refrain that will echo throughout The Hunger Games’ entire run, this also isn’t Twilight; the point is not who she chooses, the point is not Team Gale or Team Peeta. Riding off into the sunset is not the point of this story.The point is Katniss. The point is this teenage girl who finds herself in an impossibly messy situation, a life and death one at that, that yes, includes these two boys, but also includes her mother and her sister, Haymitch, Cinna, Madge, and every single victim of the Hunger Games, from the past participants to the people who have to watch their kids starve to death or get murdered in the arena.

And I stand by that statement. Luckily for everybody, though, so did Catching Fire.

The love story was, as Francis Lawrence promised, brought more to the surface in Catching Fire: Unlike in the books, Gale and Katniss operate much more as a couple in the first part of the film, which complicates things even more for the times when Katniss is onscreen with Peeta, for whom it becomes obvious she also does not lack feelings for.

There's one scene with her caring for Gale after he's been whipped, and another of her in hysterics when Peeta was almost killed after hitting the arena's border. There's balance, there's focus, there's kissing — all integral aspects of any love triangle.

But Catching Fire succeeds in that it doesn't try to be like every other love triangle — and it doesn't even attempt to be the story's most important element. Whereas Twilight's main focus always was and always will be romance — and, for all of Twilight's faults, there's nothing wrong with a romance — The Hunger Games cannot be that.

And because it never even attempted to masquerade as such — Peeta "forgave" Katniss for her arena deception pretty early in the film, and Gale put a higher premium on sparking a revolution than he did on running away with the girl he loves — the whole thing comes off as much less forced than the trope of the love triangle often does these days.

And because of this — because these people's lives or even happiness are not 100 percent or even 60 percent tied up in who ends up with who, but rather on other important things like whether their families will survive, the immediate future of the country in which they live, whether or not they'll be manipulated into more murder, etc. — the Peeta/Katniss/Gale love triangle extravaganza (although here it's more of a B-story) rings much more truthful.

In a world far over-saturated with love triangle story-lines, one crucial aspect that can make a story like that really sing is true complication. Sure, Katniss might have ended up with Gale if she'd never been reaped and the two had been allowed to keep living uninterrupted from their starting point in book one. But they weren't uninterrupted — Katniss was forced to go kill a bunch of people.

And because Katniss had to go kill a bunch of people — and because she's the type of person who creates strong bonds with people she lets get close to her, and because Peeta was kind and noble and understood her in really interesting ways, and because killing people is really messed up — Katniss comes back from that damaged. Her feelings for Gale have not disappeared, but then there's Peeta — Peeta who was there and Peeta who got it in a way that literally no other person in the world could understand.

And so there are these two boys, and they both love her, and she loves both of them — but like I said, the girl's got other things on her mind. And at the end of Catching Fire (spoilers, but like really just go see the movie already), when she could have kept looking for Peeta, her brain flips into exactly the right place when she instead decides to send that arrow up into the sky in a big eff-you to the Capitol.

Girl's got her priorities straight — and luckily for us so did her movie.

I won't go into what happens in Mockinjay here — although that, in my opinion, is an even more interesting look at these dynamics, especially when it comes to what goes into who she does choose — because that's another book for another film for another time. But suffice it to say that, yes, The Hunger Games is not about a love triangle. But they still did it better than Twilight.

More like this
9 Must-Read New Books Out This Week
By K.W. Colyard
A 'Bridgerton' Star Just Dropped A Major Hint About Joining The Live-Action Barbie Cast
By Bustle UK
This 'Hunger Games' Alum Will Star In A New Medical Drama Titled 'A Mistake'
By Alyssa Lapid
One Powerful Quote In 'Doctor Strange 2' Is Going Viral On Twitter
By Alyssa Lapid
Get Even More From Bustle — Sign Up For The Newsletter