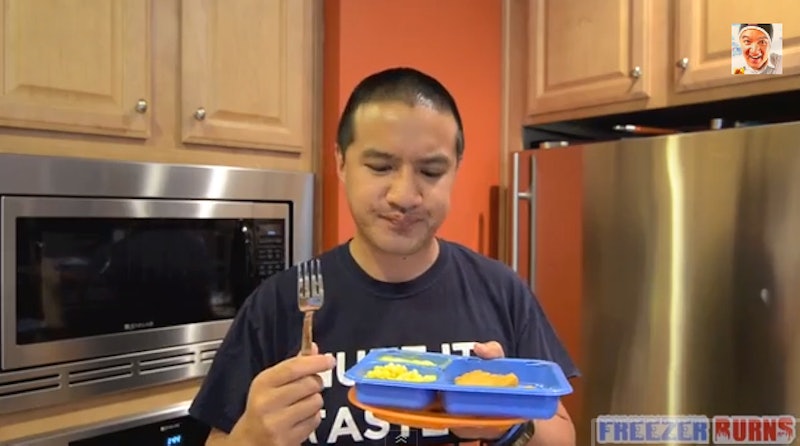 For almost 700 episodes, YouTube star Gregory Ng has munched his way through frozen fare and given us restaurant-style reviews. He's basically living every college students dream — sifting through the endless microwave dinner options and presumably making money from nuking and scarfing down the stuff our budget sometimes forces us to buy. But on his 692nd episode, Ng had one bite too many and left Freezerburns for good.

Ng started Freezerburns in 2008. The self-proclaimed "Frozen Foods Master" munched his was through 1,000 frozen dishes in those six years, featuring both sodium-packed monstrosities and healthy alternatives. Basically, he's seen the best and worst of the frozen food industry. So, what caused his revelatory exit mid-way through a piece of oddly-shaped chicken? A $2 Kid Cuisine How to Train Your Dragon Chicken Nuggets, that's what.

Ng did a round-robin style taste test of the meal. He snubbed his nose at the watery corn, calling it flavorless and pointless in frozen meals ("Corn is kind of like a vessel. It's a vegetable vessel."). The macaroni and cheese sauce was overcooked ("I don't even need teeth. I could gum this and break it down as much as someone with teeth."). He could excuse all of this, apparently. After all, he had corn-starch filled fruit snacks waiting for him at the end! But then came the chicken.

Ng ranted about the unrecognizable ingredients and clear marketing toward children, growing increasingly frustrated as he spoke. Finally, the microwave chef boiled over:

In the last few years, apparently, Ng had adopted healthy eating habits. He told AdWeek that the commercialization of the disgusting product led to his almost literal mic drop and permanent exit from the show.